The hidden gems amongst the 150th celebrations at Queen’s Birthday weekend were the speeches given at the Convocation Ceremony, the church service and by the honorary doctorate recipients at the Anniversary Dinner. Humble, inspirational, funny, full of affection and challenging – here’s a small taste of what some of our University’s leaders and distinguished alumni had to say about Otago and its place in their lives:

All photos provided by Sharron Bennett

“One winter’s day, just like this one, we students were sent to Hoopers Inlet to butcher a stranded elephant seal in order to extract the bones for our comparative collection. The Army then set up a battery of field cookers between the Phys Ed building and the Botany department and proceeded to boil down the rotting joints, an operation that cleared offices across the much of the campus.

“Boiling down big beasts was thereafter forbidden by the Registry, but in pursuing other directions in archaeological science the Otago department rose to international attention and I had 20 wonderful years there.”

“One of the qualities of Otago that I liked most, was the foundation of teaching and research in scientific philosophies of critical thinking, and their embodiment in our academic history. This is not as common in universities as one might think, but I suspect that the staunch respect for intellectual tradition at Otago is one reason why it retains the loyalty and affection of so many of its former students and staff. We recognise the enduring worth of Otago's scholarly ideals and practice.”

Dr Annandale-Atherton said she found the idea of giving a speech “a bit nerve racking”. Making the presentation of a gift within the context of her Samoan culture became her focus. She didn’t write speech notes, but retells some of her sentiments on the night:

“It was important to me to thank the University for the great honour given me and to acknowledge the role of my loving parents who encouraged their children to reach for the impossible. They supported us throughout our journey through life. I thanked Dr Tasileta Teevale, Director of Pacific Development at Otago and Faumuina Associate Professor Fa’afetai Sopoaga and staff of the Va’a o Tautai/Division of Health Sciences at Otago for nominating me for a doctorate.

“After introducing my family I said ‘I don’t want to talk about me – tonight is not about who I am but where I come from’. My identity is my family, my village, my community, my country – that identity is who were are! It binds family, communities and gives us a common sense of identity and purpose.

“In that vein I explained the custom of gift-giving which is rooted in the ‘faasamoa’ or Samoan way, and in acknowledgment of the gift from Otago, I wished to present a small gift of love or ‘aroha’ in Māori, ‘mea’alofa’ in Samoan – a piece of Samoan siapo elei, tapa cloth. I completely failed to mention that it was crafted and framed by young women and men from Poutasi village where my brother is the paramount chief. I was not happy with myself about that omission.

“The finale of my ‘speech’ was the presentation by my sister and nephew of the tapa, followed by a song started by my brother with the other Samoans joining in. Having heard the singing I had to dance a siva – I am not a very good Samoan dancer but felt moved to dance. When a female dancer has a traditional tattoo on her legs it is traditional for her to let it be seen – wearing tights made that somewhat difficult! This was all to highlight some aspects of where I come from.”

“It may seem an unlikely arc for someone coming from Dunedin or doing a Phys Ed Degree to end up in a career advancing gender equality and women’s rights issues around the world, and ultimately to work in countries experiencing armed conflict and with communities most affected by mass violence.

“But none of us are defined or described by only one aspect of ourselves and as much as sport, competitive play and the need for physical movement were sewn into my DNA, so too was my curiosity about the world and our connection to each other, along with a good dose of the sense of fairness which we hold so dear in New Zealand.”

“With Dunedin’s history of social consciousness and as a student availing myself of the political debates on campus around gender inequality, structural violence and the ethical and legal imperatives of the Treaty of Waitangi, it was not difficult for me to find my way in the late 1980s to the movement for women’s rights and gender equality.”

“From Darfur to Uganda, from Libya to the Central African Republic, many of those in the midst of conflict display heroic determination - to survive; to believe that change is still possible even in the most dire of circumstances; and to persist in calling for peace and accountability, when the likelihood of either is remote, at best.”

“The choice to exercise courage and brave-heartedness in these circumstances breeds more of the same. That’s also true for each of us when we practice these qualities in our own lives, and it becomes true for a nation when we apply these qualities collectively.” 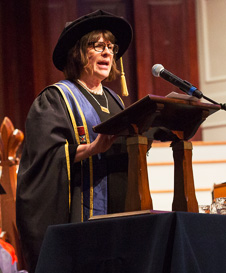 In her speech at the Convocation Ceremony Professor Harlene Hayne said the face of our University community has changed and is now richly diverse.

“We’ve come from all over New Zealand and other parts of the globe, we are Māori, Pasifika, Pakeha, Asian or a dozen other nationalities. We’re Christian, Muslim, Hindu, Jewish, Buddhist, agnostic or atheist. We are male, female, trans, straight, gay, queer, bi or questioning. We speak more than 30 different languages.

“But despite all these differences the one thing we all have in common is that we are fiercely independent. As a university we pride ourselves on nurturing graduates who understand the value of free speech, who don’t shirk from ideas that are different from their own, who have the ability to get comfortable with the uncomfortable and who are not afraid to challenge conventional wisdom.

“In a world where resilience has become a very rare commodity, Otago will continue to be a place that fosters resilience. Being a scarfie brings with it the kind of audacity that the world needs more of. The audacity to bravely stand up for what is right and just and good.” 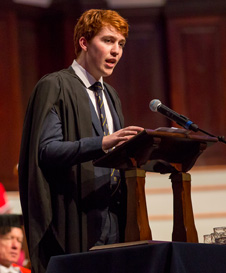 “150 years of our University also marks 150 years of personal, nostalgic and romantic stories. Individual adventures students will fondly remember for all their days. The mix of nerves and excitement during their first week, their first true love, their first true struggle – they might not make headlines or earn them an awards but these individual challenges, mistakes, and triumphs will define their lives.” 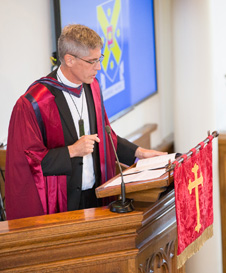 “Celebrating daring to be wise does beg the question: What is wisdom? “

“For all we human beings might take pride in our vast accumulation of knowledge and our acquisition of wisdom, if the fruits of our labours do nothing to ease suffering, to combat injustice, to restrain evil and to bring about a better world, then they amount to little more than vanity and a chasing after wind.

“But it is more than these things. It is, and must be, a centre of creativity, collaboration and discernment, standing at the crossroads of human endeavour, helping us to imagine, and to prepare for, a different kind of future and in so doing drawing on wisdom derived from multiple cultural streams, intellectual traditions and academic disciplines.

“Gaining a university education is not just about satisfying course requirements and emerging with a Degree. It is about being shaped in many subtle and profound ways, and taking one’s place in an academic community that sees the processes and ultimate outcomes of learning serving a higher good than personal success.”