The University’s 150th anniversary has rekindled memories for Otago alumni from around the world. Recollections sent to the alumni office include a first-hand account from mining graduates from Burma (now Myanmar) who were students at the School of Mines in the 1950s. 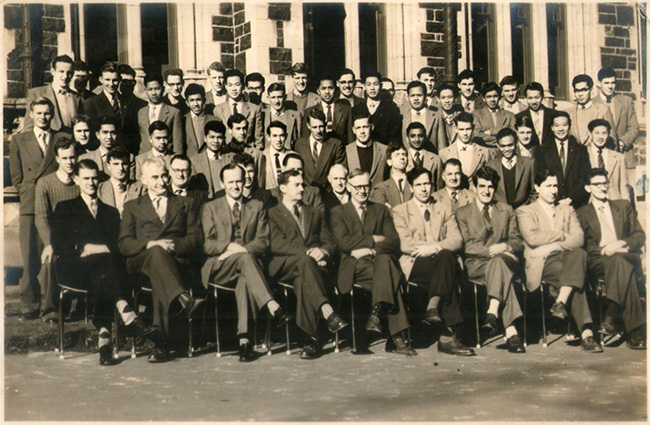 As recounted in Alison Clarke’s book Otago: 150 Years of New Zealand’s First University, in the 1950s the Colombo Plan, an agreement between various Commonwealth countries to promote economic and social development in Asia and the Pacific, brought the first wave of around 3500 international students to New Zealand, from the ’50s to the ’70s. Dr Clarke says competition for the scholarships was intense, and the plan brought “some especially bright minds” to Otago. 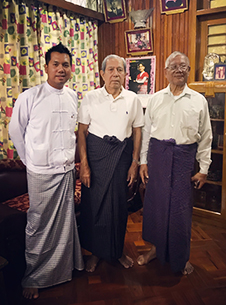 Dr Htin Lin Aung (left) on a visit to Myanmar in November 2018, with U Myint Thein (centre) and U Nyi

Among these bright minds were Maung Myint Thein and Maung Nyi, who arrived to study at the School of Mines in March, 1957.

They were some of the first scholars to come to Otago from Burma, and Maung Myint Thein went on to become Myanmar’s Deputy Minister of Mines. He says his six years at Otago “were the best and the most enjoyable period” of his life, and provided a lasting influence.

“It changed my way of living and facing life’s problems.”

The most difficult time was adjusting to the Kiwi way of life in the first year.

“It was very hard to understand the Scottish accents of our lecturers in the classroom. Living in a hostel and making friends eventually helped us to settle in. Kiwis are very friendly people.”

For Maung Nyi, Otago paved the way for his professional career and also his interest in reading classical and modern English.

In his own words – remembered as clearly as if it were yesterday - here is how U Nyi describes arriving in Dunedin from Burma on an autumn day in 1957, and the influence Otago has had on his life:

“March is the month a mild, kindly tropical winter is coming to an end in Burma. But in Dunedin, it means a cold winter is on the way. That was when we, eight of us from Burma, began our life at Otago way back in 1957.

“Flaming red and yellow leaves were falling in the parks and on the banks of the boulder-strewn Leith. The Clocktower standing atop the stonework of the main Otago University building, with Leith Creek in front of it, was a beautiful iconic signal to greet us on our first day there. The eight of us walked abreast on the little tar road under the tower, posing for the Otago Daily Times.

“We were Than Lwin, Chit Oo and Khin Maung Aye there to study Dentistry; Albert Seng Lyen and Khin Maung Htay to study Geology; Than Nyunt, Myint Thein and Maung Nyi for Mining. We were 19 and 20-year-olds, having finished two or more years at the University of Rangoon. The study tour was arranged under the Colombo Plan Scholarship scheme, our sponsors being New Zealand government.

“We were allocated to several hostels – the three dentists at Arana; Albert and Than Nyunt at Aquinas; Khin Maung Htay and Myint Thein at Knox; Than Lwin and I, at Carrington. I think the idea, besides availability of rooms, was to have us thoroughly mix with local and other international students, and get a rich social experience. It was indeed a good arrangement, and we were glad to have a good homing place whilst in pursuit of our studies. 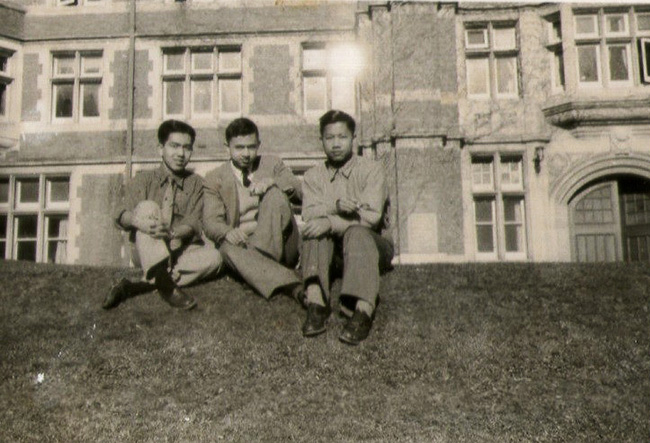 Spring 1957, from left, Myint Thein, Than Nyunt and Naung Nyi on the lawns of Knox College

“Carrington Hall where Than Lwin and I were accommodated was co-ed, with girls on one side of the two-storey building for dining and sitting halls, and boys on the other side in several different buildings. A two-storey wooden house was the residence of our esteemed Warden, Reverend Luke Jenkins and family. In our second year Than Lwin and I were given a room each upstairs in that building. Little Stephen Jenkins was a friend, often visiting our room. Mrs. Jenkins was the stern but kindly Matron. The family often took us to their vacation villa in gently rolling country outside Dunedin.

“Maung Myint Thein’s career was an exemplary success, culminating in the Ministry of Mines as Deputy Minister. I worked in the Shan hills at the historic lead-silver-zinc-copper mine at Bawdwin. It was a success story in my own modest way.

“There are two separate happy occasions to remember – a visit by Professor Buckenham and Lady Ruth, and a cycling tour by Frank Graveson, John and Linley Taylor some years ago. Maung Myint Thein and I were happy to have them with us and show them around.

“I have taken up writing after retirement, having now published a number of books on religion as well as on mundane affairs: four in English, three of them being translations, and the rest in the vernacular. One of my translation works, from English to Myanmar, is the epic poem, Light of Asia, composed by Sir Edwin Arnold.

“Looking back, they were, in spite of some bumpy starts, my happy days. I am thankful for the gentle kindness that all Kiwi friends have shown us, and the kindly parent-like care of Reverend Jenkins and Mrs Jenkins while at Carrington. The professors and all the teachers were good to me. I am very grateful that I had that golden opportunity to study under such inspiring, highly learned and wise academicians. I pay my tribute to them with love and reverence.” 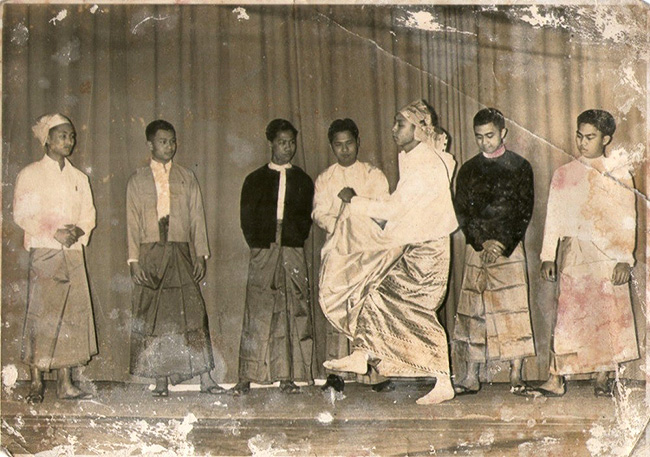 The Burmese Cultural Troupe at the 1958 Annual International Club Show

Connections between the University and Myanmar continue today, with Dr Htin Lin Aung from the Department of Microbiology and Immunology leading the joint Myanmar-New Zealand health research project, as a part of his mission to improve diagnostic procedures and develop a better treatment for multi-drug-resistant tuberculosis (Tb).

Dr Aung came to Otago from Yangon in Myanmar in 2001 as an undergraduate student, and went on to complete his PhD in Microbiology in 2013. He won a prestigious Sir Charles Hercus Health Research Fellowship in 2017 and was Illumina Emerging Researcher in 2018. Dr Aung is a recipient of New Zealand-ASEAN Award by the New Zealand Government for significant contribution to New Zealand’s deepening relationship with the ASEAN region through his translational research. In 2018 he was also named as one of 40 trailblazers under the age of 40 from South East Asia (ASEAN40under40) driving positive change and creating impact in the region.

After initial steps taken by Anna Sui, wife of the now-Second Vice-President of Myanmar, Henry Van Thio, Dr Aung has played a lead role in establishing a unique collaboration between the University of Otago and the Myanmar Ministry of Health and Sport’s National Tuberculosis Programme.

He hopes to be able to eventually alleviate the increasing burden on his home country posed by Tb. The research being conducted by Otago in Myanmar has also recently expanded to include malaria and HIV.

Transferring knowledge gained from his research in his home country using a multisectoral approach, Dr Aung is also working to reduce Tb disease disparities in Māori and Pasifika communities in New Zealand.

"I had my training here at Otago. Now, I am working on the research to make a difference in my home country and New Zealand, what a great way to give back to the community,” he says.

Vice-Chancellor Professor Harlene Hayne visited Myanmar in 2015 as part of a University of Otago delegation and met with U Myint Thein, and whenever he returns to Myanmar Dr Aung also catches up with U Nyi and U Myint Thein to talk about their time at Otago.


Note: U is the honorific for Mr and Maung is for the younger brother in Burmese, hence Maung Nyi when he was a student and now U Nyi.