Life still all about balance 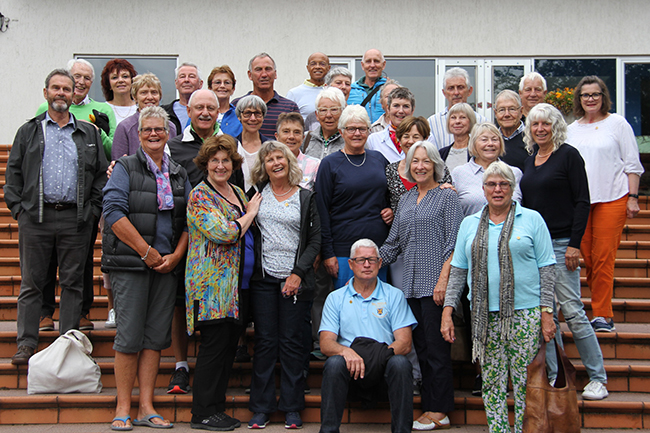 The physical education class of 1969 reunion.

Known for being “the most social group ever”, the first-year physical education class of 1969 has racked up some impressive achievements in the past 50 years.

Coming from all around New Zealand and as far as Australia, 35 class members (from a total of 62) converged on Dunedin at the weekend for the first reunion of the University’s 150th anniversary year.

As you would expect from a lively group of physical education graduates, the weekend was jam-packed with activity.  Class member Dave Norriss, ably assisted by colleagues Lissie Hogg, Wendy Dunlop, Adrian Ward and Maurie Jackways, organised a comprehensive programme including tours of the anatomy museum and physical education school. These tours were punctuated with golf, bowls and a walk to Trotters Gorge.

There was the obligatory lunch at the Captain Cook Hotel, and speakers at the anniversary dinner included eminent class members Emeritus Professor Ian Culpan, Professor Polly Parker and renowned strength and conditioning coach and former National Director of Coaching for Athletics NZ Keith Roberts, alongside current Dean of the School of Physical Education, Sport and Exercise Sciences Professor Chris Button.

Fifty years on, class members remain true to the philosophy instilled in them during their time at Otago: that life is all about balance.

Professor Culpan, who retired at the end of last year and formerly held the position of Head of the School of Sport and Physical Education at the University of Canterbury, says two key people from Otago had a huge influence on his life.

The first was long-serving staff member Stan Mair and his ability to role model a set of desired behaviours in a joyful and challenging manner, and the second Dr Jim Hay, a world authority on biomechanics.

“What interested me was Professor Hay’s professional attitude and his philosophical stance,” says Professor Culpan.

“That you could learn through movement a whole lot of integral life principles, including tolerance, generosity, humility, non-discrimination, friendship and respect for others, was a key message.

“I also learned the importance of balanced development in your life – between mind, body and character.”

Professor Culpan put this philosophy to work when he was asked to co-establish a leadership programme for the All Blacks, during the Graham Henry years, in order to bring about a change in team culture.

“It was about balanced development; about, among other things, changing the culture to learn how to grow and develop and to celebrate, without getting into a range of anti-social behaviours.”

During his time at the University of Canterbury, Professor Culpan set up the Bachelor of Education with a specialty in Physical Education degree, and the Bachelor of Sport Coaching degree, with the philosophy of coach as educator.

He has also received the International Olympic Committee trophy twice, currently teaches Masters programmes in Germany and Greece, and is Director of the New Zealand Centre for Olympic Studies at the University of Canterbury, which looks at the educational and social value of the Olympic movement.

Fellow classmate Keith Roberts also puts the life balance philosophy into practise in his work as a strength and conditioning coach for a Japanese women’s rugby team.

Having spent two years at the National Director of Coaching for the Athletics Association, Mr Roberts has also been trainer to the 1998 Sevens Commonwealth Games gold medallists and 2001 Sevens World Cup winners, coach for the Oceania Track and Field team to the 1989 World Cup, and coach to the Cook Island’s Rio Olympics and Gold Coast Commonwealth Games team.

He says the broad grounding he received in physical education teaching at Otago allowed him to work across a number of sporting codes, and set him up for life.

“PAS [Philip Ashton Smithells, Director of School of Physical Education] used to say we are the true exercise specialists.

“We learned to observe and study human movement, however it presents itself to you.”

He returned to Otago as a teaching fellow in 1981, the International Year of the Disabled, and worked on ways of integrating people with disabilities into exercise and sport, touring the country with a-then ground-breaking video about remedial and adaptive physical education, and introducing the first wheelchair tennis to New Zealand.

Former gymnast and international gymnastic judge and coach Professor Polly Parker has integrated her physical education training at Otago into a research intensive academic environment and focussed on leadership beyond physical education and sport.

She says physical education offers lessons beyond sport. For example, she learned about being student-centred and student-focussed, and the importance of getting students active and engaged.

“Several elements of my leadership can be directly connected with my physical education experience,” says Professor Parker.

“Engagement is the foundation of experiential learning, it stimulates learning through curiosity. At university we talk about it but we don’t enact that enough across all disciplines.

Her leisure activities have now moved from the parallel bars and beam to yoga on the beach as a favourite activity.

The class of ’69 has lived up to its early social credentials – PAS claimed they were the most social group of all the classes he taught – and remained in touch with each other over the years, meeting many times for reunions.

“It’s such a positive group of people, everyone here is happy, we’re like a big family,” says Mr Roberts.