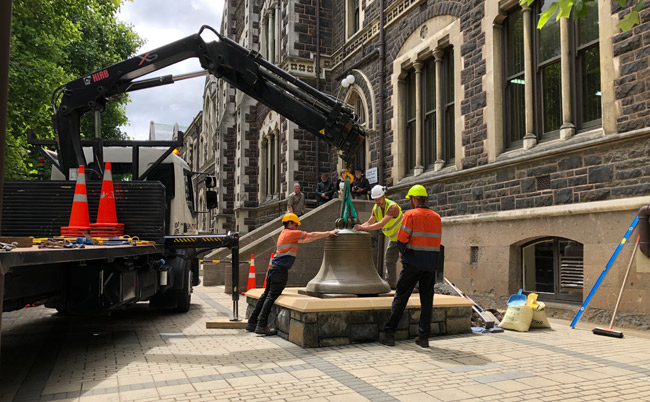 The bell being installed in the Quad outside the University's Clocktower building last week.

The 25cwt (1270kg) brass bell, manufactured in Edinburgh and shipped out to Dunedin in 1863, will be on show at the public launch of the University’s 150th anniversary – the Clocktower Lawn Picnic on Friday 15 February.

At the end of the Exhibition, the building was converted into a hospital, and the sound of the bell became a problem – it had to be muffled with wire wound around the arm of the hammer. The editor of the ODT noted that if the clock were to be replaced it had to be by a non-striking clock – as a striking clock was “injurious” to patients.

Quite what happened to the bell between 1969 and 1997, when it was craned into the Meridian Mall through the roof and put on display in the lower level, is a mystery. Perhaps a reader might be able to fill this gap?

An informal, fun event, the picnic is for all ages. Starting at 5:30pm, children’s entertainment on the night includes giant bubbles and Jenga, face painting, a balloonologist and science communicator Amadeo Enriquez-Ballestero.

Local band Loose and Colourful will be playing, actors in historic dress will mingle with the crowd, and 10 food trucks will be offering a variety of food for those who haven’t brought their own picnic.