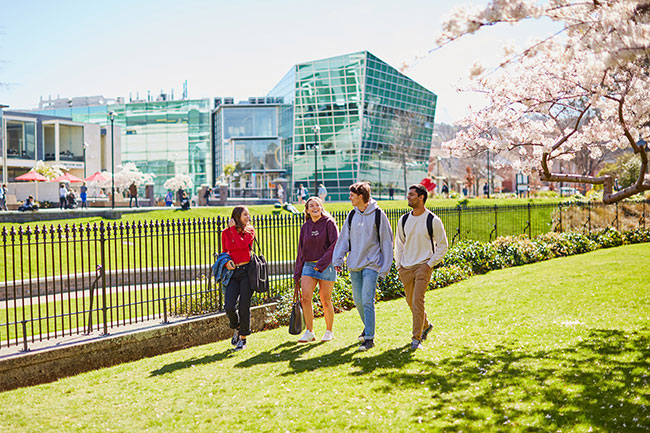 The Clocktower Lawn at the University of Otago.

New students arriving in Dunedin are in for an extra special welcome this year, with the public launch of the University of Otago’s 150th anniversary celebrations kicking-off this Friday, 15 February.

The Clocktower Lawn picnic, starting at 5.30pm, is a great chance for new students and their families arriving in Dunedin to join with staff, students, alumni, and the wider Dunedin community to celebrate the 150th anniversary of New Zealand’s first university, founded in 1869.

The Vice-Chancellor, Professor Harlene Hayne is delighted to invite the wider Dunedin community to the birthday picnic, to join with staff, students and alumni in the celebrations.

“The University has always been a huge part of the city and this is a wonderful opportunity to invite the Dunedin community into our home to help us celebrate our 150th anniversary.”

Stilt walkers and actors dressed as historic University characters will mingle with the crowd, along with members of the Highlanders rugby team and the Otago Volts cricket team.

The Highlanders will be at the picnic from 6-6:30pm taking rugby games and skills sessions for children, and the Volts will be there from 6:30-7pm taking cricket games. There will also be a giveaway of a rugby ball signed by the team, and a jersey.

Local band Loose and Colourful and Otago graduate and musician Casey Dixon will be playing, and nine food trucks and the University’s new barbeque cart will be offering a variety of food for those who haven’t brought their own picnic. 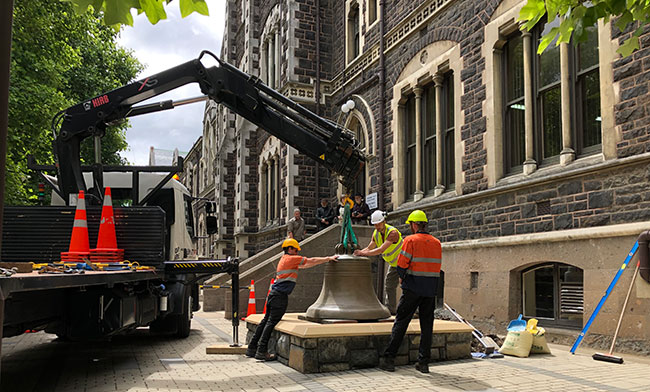 The historic Clocktower bell from the original University of Otago premises being placed on campus.

At around 6.30pm, Professor Hayne, along with the Chancellor Dr Royden Somerville QC and Deputy Vice-Chancellor External Engagement Professor Helen Nicholson, will gather by the historic University Clocktower bell, for a few informal words of welcome to launch the anniversary year. This will be live-streamed to the University’s Auckland centre, which is also holding a barbeque.

The bell itself has a colourful past, and has only recently returned to the campus after 142 years, just in time for the anniversary.

Made in Edinburgh and shipped to Dunedin in 1863, the 25cwt bell was first placed in the tower of the New Zealand Exhibition building in 1864. In 1868 it was moved to the new Post Office building in Princes Street which later became New Zealand’s first University, housing the University of Otago from 1871-1877.

Upon its sale to the Colonial Bank in 1877, the new owners refused the University’s claim to the clock and bell, citing them as fixtures of the sale. After the building, which became the Stock Exchange, was demolished in 1969, the bell mysteriously dropped out of sight of until 1997. It then appeared on display at the Meridian Mall.

Twenty years later, a University employee made the connection between the bell and the original University premises. The well-travelled bell was placed on the campus two weeks ago.

As well as Dunedin and Auckland, 150th anniversary celebrations will be happening in Hong Kong on Friday night, where alumni, friends and family are also getting together to share a picnic.

Anniversary celebrations will continue throughout 2019 with a wide range of academic conferences, concerts, reunions and sporting events. Queen’s Birthday Weekend events will include a formal Convocation Ceremony and church service. During the year-long celebration, the University will not only reflect on its strong past, but it will also acknowledge the changing face of its people and valuable contribution by Māori, Pasifika and people from other cultures around the world.