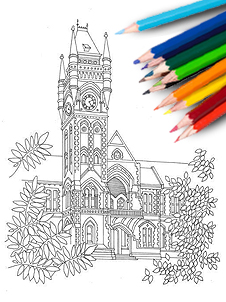 Try creating your own image for the 150th anniversary colouring book - like this one by Ruth Young.

Feeling creative? Why not sharpen the pencils, get out the sketch book or camera and have a go at creating some artwork for the University of Otago 150th anniversary colouring book competition.

Entries can feature anything on campus or a scene from the wider Dunedin area, and the competition is open to staff, students, alumni and residents of Otago.

As well as being part of the University’s 150th celebrations, the competition also ties in with a study undertaken by Otago’s Department of Psychology in 2017 which found that colouring-in may improve adult mental health.

Up to 20 images will be selected for the book, with a prize of a $100 each and $500 for the entry chosen for the cover. Artwork must be original and supplied as a pdf file, which is to be sent to colouringcomp@otago.ac.nz with your full name, phone contact and residential address.

You can submit as many entries as you like and the competition closes at 5pm on Friday 22 March, to enable it to be printed in time for the Queen’s Birthday Weekend anniversary celebrations. Winners will be announced by Tuesday 2 April.

Further details can be found here.