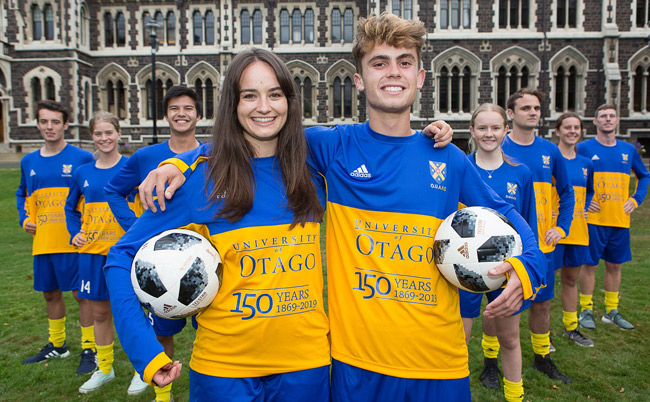 The Otago University Association Football Club (OUAFC) kick started its season on Wednesday night with a special launch at the Otago Business School – celebrating its new Māori name and showing off its commemorative 150th anniversary kit.

In what is believed to be a first for a South Island football team, the club has adopted a Māori name – Te Kapa Poiwhana o te Whare Wānanga o Ōtākou. The club went through the Treaty of Waitangi Committee process in adopting the name which resulted in the name being gifted to the club.

Club life member and coach of the women’s top Premier team for the third year James Coombes explains the name.

"The name was adopted to acknowledge the special relationship between the University and its community, and the mana whenua including the local Ngāi Tahu tribe with historic links to the Water of Leith area adjacent to the club’s home at Logan Park."

“The name was adopted to acknowledge the special relationship between the University and its community, and the mana whenua including the local Ngāi Tahu tribe with historic links to the Water of Leith area adjacent to the club’s home at Logan Park.”

Wednesday night’s event saw a presentation of the teams, with players also receiving a 150th commemorative uniform to be used on special occasions. The uniform has been specially designed as a one-off and carries the 150th logo.

It is a big year for the club, which will also move to its new facility, the Football South Home of Football consisting of two artificial grass turfs built on the club’s existing training fields at Logan Park.

Games start next week and this year the club is fielding six men’s teams and four women’s teams, making it the largest senior club team in Football South, which encompasses Dunedin, South Otago, South Canterbury, North Otago and Central Otago regions. Around 90 per cent of the players are students, along with a handful of staff and alumni.

Mr Coombes says while most students join the club in their later years at University, there is an increasing trend for joining up in their first year, and the club works with them to keep a realistic training balance.

“We recognise all the things that are going on in their lives and how important it is that they engage academically.”

The club is also holding a reunion for all players on the weekend of 9-11 August, which coincides with the Anniversary Gold Ball on 10 August.