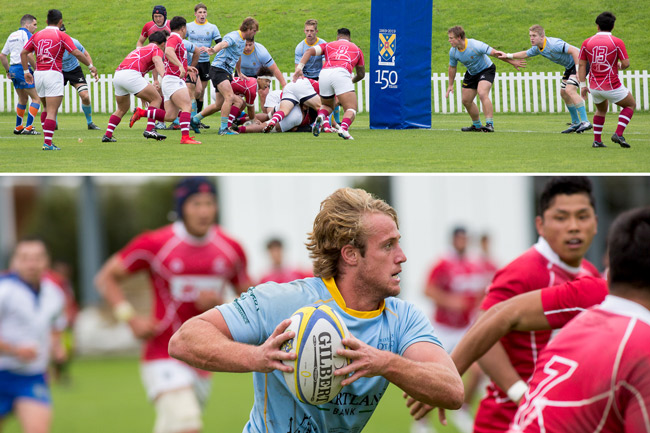 A fast-paced game saw Otago University A beat Kansai 54-39 in the first match of the Kansai's rugby tour to Dunedin - part of the University's 150th celebrations. Photos: Sharron Bennett.

Despite a sharp reminder that winter is just around the corner, a good crowd of around 300 braved wintry showers and turned out to watch Kansai Universities play Otago University A in the first match of Kansai’s rugby tour to Dunedin.

Kansai and NZ Universities were formally welcomed to the City of Dunedin on Monday by the Mayor David Cull, Otago University Rugby Football Club Chairman Paul Hessian and University of Otago Director of Marketing Todd Gordon.

Tuesday’s game provided spectators with plenty of action and a high-scoring result. After getting off to a fast start and scoring early, Kansai led 24-21 at the end of a close-fought first half.

The Otago team however came back strongly early in the second half, scoring three tries in quick succession. Kansai responded but a further two tries from Otago secured the match for them at 54-39.

While Kansai scored seven tries to Otago’s eight, the difference came from the boot of Otago first five Mike Williams, who missed only one conversion.

“The conditions made for some spectacular rugby at times,” said University Rugby Club chairman, Paul Hessian. “We witnessed fast, open University-style rugby and some well-constructed tries, with the outcome of the game in the balance for a long period. A fitting start to rugby’s contribution to the University’s 150th celebrations.” 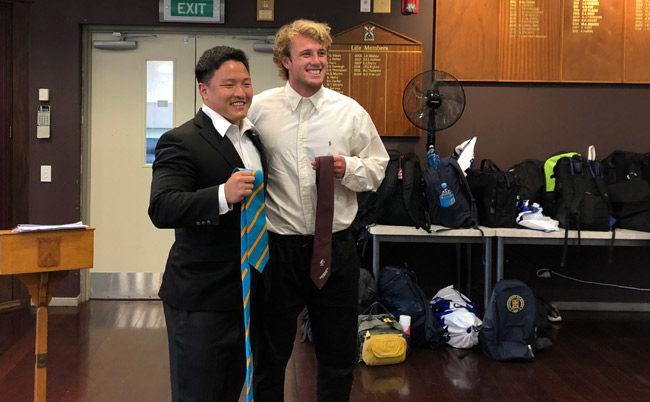 After the match, the two squads met up in the clubrooms for speeches and an exchange of gifts. Captains Jack McHugh and Hisanobu Okayama exchanged ties, and all team members and officials received 150th lapel pins and certificates of appreciation.

Deputy Vice-Chancellor (Research and Enterprise) Professor Richard Blaikie spoke to the gathered crowd, saying he was an avid rugby supporter and he was impressed with the daring skills and talent on display. He said Otago’s motto, Dare to be Wise, can also be looked at from a different angle - that it can be wise to be daring.

“What I saw on the rugby pitch today was a lot of wisdom, a lot of daring, people taking chances and opportunities to express themselves with skills and talent.”

President of the Kansai Rugby Football Union and distinguished Japanese player Yoshihiro (Demi) Sakata thanked everyone for the wonderful match and then presented the University Rugby club with a colourful replica of a traditional Japanese Samurai helmet to commemorate the game.

“I am sure the players have gained experience and new friends from the match, and I hope the friendships made today will endure for many years.” 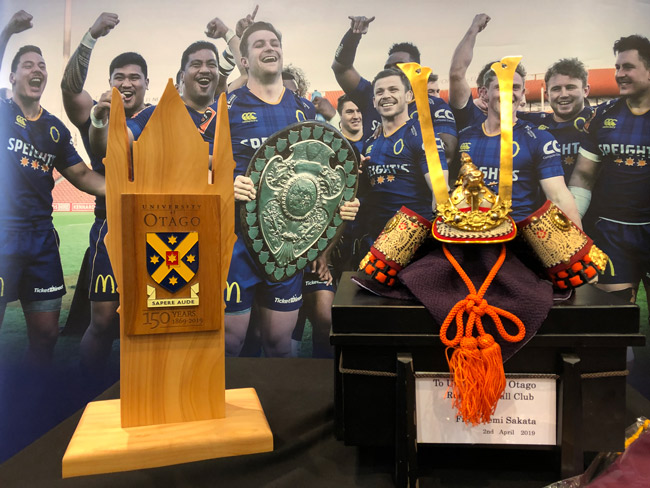 A macrocarpa commemorative trophy, carved in the form of the Clocktower Building was Otago's gift to Kansai, who returned the gift with a replica of a traditional Japanese Samurai helmet.

In the introduction to Kansai’s official guide to the tour, Demi says it is an honour and a privilege to play against Otago on the special occasion of its anniversary.

“I am sure that this opportunity to play against the University of Otago and NZU Rugby will create lasting, happy memories for everyone connected with our touring party.

“Although our stay in Dunedin may be short, I sincerely hope that our students have a once-in-a-lifetime experience and create lasting new friendships through this New Zealand tour.”

He also looks forward to welcoming visitors to Japan for the Rugby World Cup in September.

The 30-member Kansai squad, chosen from eight universities in Japan’s Kansai region, will now turn its attention to the game against NZ Universities on Saturday, at 2.30pm at the Oval. The curtain-raiser for the game will be a local competition match between Otago University Women’s and Pirates.

After Saturday’s match, a formal dinner will be held in the University clubrooms. Speakers and distinguished Otago alumni attending on the night include Dr David Kirk, former University A player, former All Black captain and now NZ Universities patron.

The NZ Universities squad consists of 23 members, and it is the first time in 27 years that NZ Universities has played in Dunedin, the last match being in 1992. The NZU team includes four Otago players for Saturday’s game.

The only previous game involving NZ Universities and a Japanese team in Dunedin was in 1968 when a NZ Universities XV was beaten 19-32 by Japan. The Universities team travels to Japan every other year, with intervening years involving hosting Japanese rugby teams in New Zealand.

Both teams will train at the University rugby grounds during the week and also spend time sightseeing around the region.