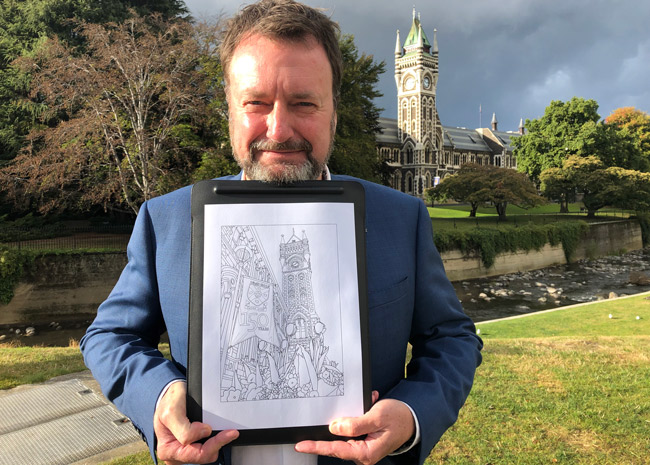 150th artwork competition winner Ian McGee with his picture of the Clocktower Building which will grace the cover of the 150th colouring book when it is released before the University's Queen’s Birthday 150th celebrations. 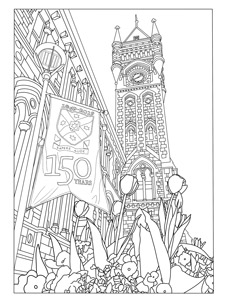 The University’s 150th anniversary artwork competition was the perfect excuse for winner Ian McGee to spend the summer taking photos and creating images on his iPad Pro.

“It justified me saying ‘I’m off to do some drawing’,” says Mr McGee, whose image of the Clocktower Building set behind a 150th banner and a profusion of flowers will grace the cover of the colouring book, which will be published before the official 150th anniversary celebrations at Queen’s Birthday Weekend.

The artwork competition attracted 62 entries from students and staff from Dunedin, Christchurch and Wellington campus’, as well as alumni and Dunedin residents. Images included a wide range of scenes from around the campus and Dunedin city. All the images, apart from the cover, will be kept under wraps until the book is published.

"The competition appealed because of the challenge of finding interesting ways to explore this city we live in."

Twenty entries were selected for the final publication, including a further three drawings of Ian’s.

“The competition appealed because of the challenge of finding interesting ways to explore this city we live in,” says Mr McGee, a producer and writer for NHNZ, who has previously worked at the University as a Zoology Teaching Fellow and Director of Filmmaking for the Centre for Science Communication.

Although he has never taken art classes, Mr McGee says he has always drawn and through his work he does a lot of drawing and graphics for storyboarding.

While he had resisted the technology for many years, he says the iPad Pro has transformed the process of drawing for him, and he loves how the electric pencil lets him draw while also providing an undo button so he can keep refining forms and colours.

“I can take it anywhere, I can draw and watch the cricket, and take it around and take photos of buildings. That’s why the competition’s been such a fun experience.”

For the winning entry, he tried to counter the “chromatically challenged” stonework of the Clocktower Building by introducing opportunities for colour in the banner and the flowers. His other images are from around the city but all have links with the University.

"Right from the start of this project we wanted to include the wider community – whether or not they worked or learned here on campus – and it did just that."

Competition organiser Cara Duffy says the judges were impressed with the great talent and creativity of entries received.

“Right from the start of this project we wanted to include the wider community – whether or not they worked or learned here on campus – and it did just that.”

She adds that the book, which is being created as part of the University’s 150th anniversary celebrations, ties in with a study undertaken by the University’s Department of Psychology last year, which found that colouring-in may improve adult mental health.

“From comments received it seems that the act of drawing also provided some much needed therapeutic relaxation after the recent tragic events in Christchurch – so we were pleased to have aided this process.”

The book will be launched immediately before the Queen’s Birthday celebrations.