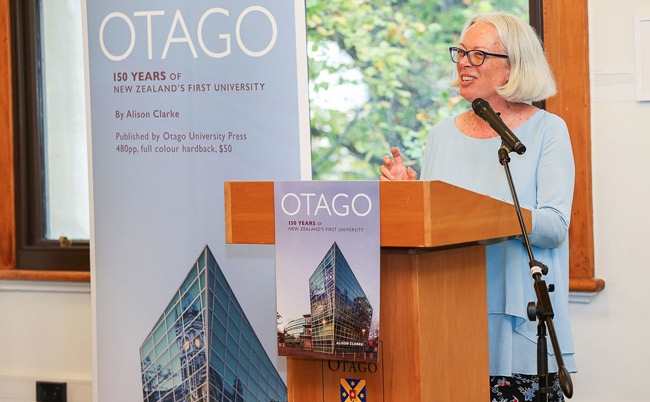 “When I was approached about writing the book I was surprised, and excited and terrified in equal measure,” says Dr Clarke, an experienced historian and author, who spent five years part-time researching and writing the history, which marks the University’s 150th anniversary.

"When I was approached about writing the book I was surprised, and excited and terrified in equal measure. It was a privilege, a pleasure and a huge challenge."

“It was a privilege, a pleasure and a huge challenge.”

Around 100 people gathered at the Staff Club recently for the launch of the book, which was published by Otago University Press (OUP). Out of respect for all those affected by the tragic events in Christchurch, University Chaplain Greg Hughson led the gathering in prayer.

First to speak was OUP co-publisher Rachel Scott, who says the history is one of the biggest books OUP has produced, with Dr Clarke writing 240,000 words in her efforts to do justice to the enormous topic.

She praised Dr Clarke’s “stellar organisation and thoroughness” and describes the book as a supreme achievement.

Professor Ballantyne says one of the strengths of the book is that it can be read in so many different ways.

“You can start at the beginning and read through to the end, or you can choose chapters you like and dip into any of them.

“One fantastic way of reading it is through the images.” 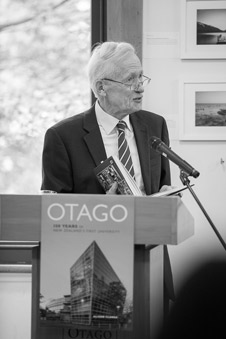 Former Vice-Chancellor Professor Sir David Skegg officially launched the book, saying that when reading it he had asked himself the question “does this book capture the institutional saga that makes Otago unique?”

“The answer is a definite yes, I really feel it is a wonderful book.” He agreed with Otago Daily Times reviewer Jim Sullivan that it was “social history at its best”.

He mentioned the blog Dr Clarke had written while working on the book, which he had found fascinating, and also said she had avoided falling into the trap of producing a “public relations document”, instead writing about many crises the University has faced.

There was also a lot about student life and all the students and staff who made up Otago, including women, Māori and Pasifika, which “restored the balance” of earlier histories.

"Alison has produced a book that is not only readable, but thoroughly entertaining. I believe it makes clear why our University attracts such affection, love and loyalty."

“Alison has produced a book that is not only readable, but thoroughly entertaining,” Sir David says. “I believe it makes clear why our University attracts such affection, love and loyalty.”

Dr Clarke thanked the many people and organisations who had helped her while she worked on the book.

She says her approach to the task was to write “history from below” and one of her favourite memories was interviewing Ian Chirnside, at the age of 106, who was the oldest person still living at the time who had been connected to Otago. Mr Chirnside had started work at the University in 1922, aged 14, as a junior technician at the Dental School.

“I tried to provide something more than tales of the administration and its most senior people.

“The book is I hope a fitting tribute to the students and staff who have made the University of Otago the intriguing and interesting and fabulous place that it is.”