Coming up roses for the 150th 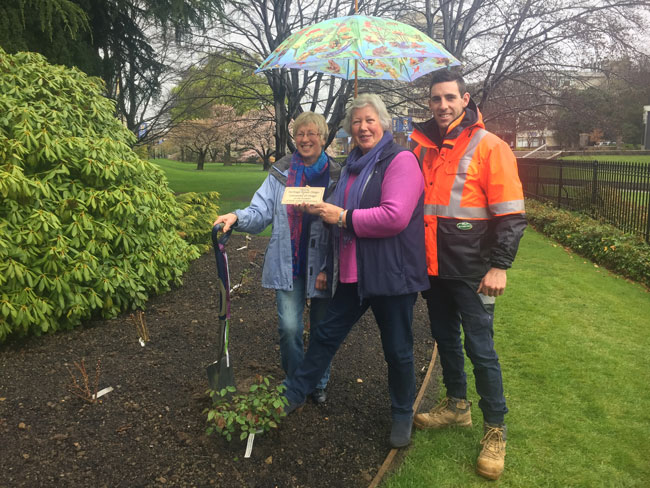 In the new garden … with the University’s new heritage roses and a plaque to mark their donation are (from left) Heritage Roses Otago convenor Fran Rawling and secretary Maureen Viggo and Property Services Division groundsman Kain Lemmens.

A donation of 20 heritage roses for the University’s 150th anniversary is in a new bed on the Dunedin campus and set to start blooming later this month.

Heritage Roses Otago ensured many of the plants it gifted originated in the 1800s, as a nod to the University being founded in 1869, and that many blooms are fragrant, convenor Fran Rawling and secretary Maureen Viggo say.

Tea roses form the front row because they will bloom for long periods in repeated flushes all season. They graduate from pinks to peaches and apricots across the garden, which is curved around a large rhododendron immediately west of Scott Shand House.

Three of those plants are known as butterfly roses because individual blooms open yellow then graduate to apricot, red and crimson, and are on a single bush simultaneously in all those colours, so the bush appears to be covered with butterflies (Mutabilis, from pre-1894 China), Mrs Rawling says.

While the garden is designed to have year-round interest, one bush will be covered in leaves and blooms all year, the 1899 French tea rose General Gallieni, named after the military man arguably most famous for moving troops in taxis from the Paris garrison to the front line during World War I.

The back line of roses have yellow and red blooms that appear in early summer, then some produce show-piece hips that birds love, along with coloured leaves in autumn.

Three of those roses are named after navigator and explorer Jacques Cartier who is credited with naming Canada – his light pink rose (1868) has a particularly strong fragrance.

The organisation’s members have provided advice to University of Otago grounds staff about how to care for the roses. Unlike more modern varieties, they do not need deadheading because it will prevent the hips appearing.

The bushes do not need pruning either apart from taking out dead wood, which often only becomes obvious in spring. Heritage roses’ branches all nip together in a self-strengthening manoeuvre that prevents wind and snow breaking the bush apart.

Heritage Roses Otago looks after the heritage roses at the Dunedin Railway Station and the Northern Cemetery, where a celebration of the replanting of 500 heritage roses that were mysteriously poisoned will include tours and free Devonshire tea on 7 and 8 December, between 10am and 5pm.

Not only do heritage roses take four to five years to propagate, the cemetery garden soil had to be tested for two years before any roses could be replanted, and some are the rarest breeds in the world.

The Northern Cemetery, opened in 1872, is a Victorian garden cemetery. Family members planted roses with English or Irish evergreen trees beside the headstones, Mrs Rawling says.