History of the Department of Geology

Events from the time-line 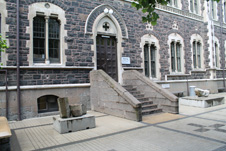 Main entrance to the Geology Building

The following year, G.H.F. Ulrich was appointed Director of the newly established School of Mines, from which came the graduating qualification of Associate of the Otago School of Mines, with various options of specialisation, including the option AOSM (Geology).

In 1885, ‘Geology’ was offered as part of the University of New Zealand BSc degree, followed by the appointment of G.J. Binns, to the SoM, specifically to teach geology; J.R. Don’s appointment as (part-time) Lecturer in Geology was 1893.  With Ulrich’s death, in 1901, James Park  was appointed Director of  SoM.  At the same time, Patrick Marshall was appointed fulltime lecturer in Geology and in 1908 appointed the inaugural Professor of Geology in the University of Otago, albeit still  on the strength of the School of Mines.

It was with his resignation in 1916, that, the following year W.N. Benson came from Sydney to take the post—and  role—of  Professor of Geology, advocating for the removal of the Geology Department into the vacant Medical School building, across the quadrangle from the University main building, which, shared with Chemistry, was effected in 1926/27 an arrangement which lasted until 1975, when Chemistry moved and Geology took over the entire Leith Street building, which had acquired its  last—of five—structural modifications in 1914, since the initial establishment in 1878. 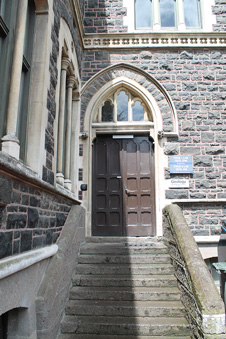 A number of very influential people have moulded the history which has led to the success of this department.

The great majority have been men, for although the University of Otago facilitated the admission and graduation of women from its inauguration, only since the second half of the 20th century have they offered themselves in significant numbers as students and latterly as staff.  However, women were not acceptable as students at the School of Mines.

Ulrich was an important geologist, significant to mining in New Zealand having been ‘head-hunted’ from Melbourne.  James Park, who followed him, was established in New Zealand mining world, notably in Thames and the Coromandel where he established mining schools for the gold  miners before being appointed as Director to the Otago School.

Marshall resigned in 1916, making the way for the important and influential eccentric, W.N. Benson, who really lead the Geology Department, University of Otago into independence as an department, both geographically and administratively from within the mining school, University of Otago.  In 1926, Frank J. Turner was appointed Lecturer, as the second staff member of Geology.

Whilst he was promoted, his ability and reputation were sufficiently acknowledged that he was able to resign his post in Dunedin after twenty years to relocate successfully and influentially on the west coast of the United States.

In his place, in 1947, came D.S. Coombs, original appointed to the department as assistant lecturer in 1947.  Coombs was to capitalise upon Benson’s foundation by remaining in and then leading  the Department (1955) through that most formative and expansive period of the second half of the 20th century until his retirement and acknowledgement as

Emeritus, in 1989.  Since that time the leadership of the Department has been taken on a rotational basis by incumbent staff although a number of well deserved personal chairs have been awarded in recognition of major contributions to academic geology in the University of Otago.

Clearly the record of graduates in geology, both from the School of Mines and from the post war Geology department is extensive beyond recounting here but, nonetheless, has provided a major contribution to the science both in New Zealand and, most influentially world wide.  A single exemplification will serve to illustrate the point; in 1904 J.A. Thomson, AOSM (Geology) succeeded to the first New Zealand Rhodes Scholarship, held at Oxford University, only two years after the inauguration of the award. 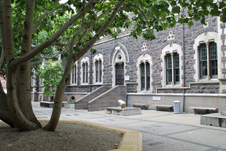 The Geology building from inside the quad

Originally, the only degree offered at the University of Otago was B.A., described as a "general culture degree" but with the variant of a "Scientific Course" which allowed the inclusion of chemistry, geology, mineralogy and palaeontology, all to be part of the a three year natural science course of Dr James Gow Black, from Edinburgh.

In 1879 the Otago School of Mines was firmly established with the appointment of G.H.F Ulrich as Director, the qualification from which was Associate of the Otago School of Mines (AOSM) and included elements of geology, which was specialised in a variant qualification, i.e., "Associateship – Geological Division", which, over three years, required papers in physical geology, mineralogy, petrography and palaeontology.

Before the turn-of-the-century appointment of  Park following the death of Ulrich, the University had established a Faculty of Arts and Science.  By this time there had been ten Associates in geology but with all the ‘paper evolution’, there was little change in the prospectus of study for the earth sciences.

Marshall offered Cosmical and Physiological Geology, Dynamical Geology, Petrography, Stratigraphical Geology and Theoretical Geology – "the work of this class, combined with that of the Paleontology class, will cover the requirements for the BA and BSc degrees" (1904 Calendar).

By 1910, the prescription for BSc students, as opposed to mining students, showed clear differences, underlining the distinction between the administration of the Faculty of Arts and Science and that of the School of Mines of the University of Otago.

The 1918 academic year was the first to come under the major and lasting influence of W. N. Benson as professor of geology, albeit initially being on the strength of the School of Mines, he had his own course within the Faculty of Arts and Science, which, by 1918, was offering a geology pass degree course.  That curriculum was catholic in the subjects it offered within the field of geology as we know it today.

Field work had been introduced in 1911, the importance of which, with laboratory work, was emphasised as essential to the course in 1918.  Note that there was a strong expectation of a reading knowledge of French for the reference texts.

It was later in 1943 before the final separation of a Faculty of Science was established by which time Benson’s mark was established in the field of geology, then ably assisted by F.J. Turner since 1926, the first salaried assistant to share that gigantic workload of teaching geology to students of both BSc and AOSM courses, however much overlap of classes there may have been, in lectures, laboratories and field work—of  which the 1930Calendar remarked, "excursions will be held on Saturday afternoons to study the local geology.  Attendance at these excursions forms an essential part of the course".

Following Benson’s departure in the late 1940s, there was a short period of unsettlement in leadership until the appointment of DS Coombs to the Chair in 1956, having first appeared on staff as lecturer in 1947; he held that Chair until 1989, when he retired as the last Head of Department with tenure in that role.

From that time also the curriculum has become a dynamically evolving subject, governed both by scientific knowledge and the need for selectivity and allocation from an expanding knowledge base.

Such changes—and the immensity of the subject—are probably best reflected by Coombs’ "advice to intending students" in serial Calendars, advice itself changing year by year as a reflection of the dynamism of Earth sciences, "Geology … is concerned with the history, structure, composition and process of the outer crust of the Earth … two main aims … understanding of the terrestrial environment and some of its chemical and physical processes.  It teaches us the immensity of time and the philosophy that to a large e tent the present is the key to the past". 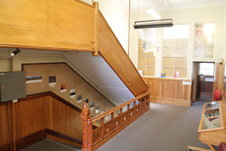 At its opening, in 1871, the University of Otago was housed in the Exchange Building in the centre of Dunedin.  Its inadequacies led to the establishment of the purpose built University Buildings, along the Leith, to the north of the city.

Across a quadrangle from the main building—now the registry—the accessory building initially housed the teaching of chemistry and anatomy with physiology, opened in 1879, as the original Medical School.  From 1872, the "earth sciences" were taught and demonstrated in the general university lecture rooms and laboratories.  However, with time came the  expansion in all subjects, a change from which geology was not exempted.

Quite when "the Department" came be said to have been originated is a philosophical debate.  Was it with the appointment of the first Professor of Geology, Patrick Marshall in 1908?  But Marshall was on the strength of the School of Mines.  Benson, in 1950, described Marshall’s 1901 appointment as that of "Lecturer-in-Charge of the Department of  Geology in the University of Otago" but the term Department of Geology had never appeared in the University Calendars, the ultimate source of authentic information on University matters.

With Marshall’s moving on came the advent of Dr W.N. Benson, from Sydney, into the "Chair of Geology, University of Otago", who, although a professor of the university, still worked out of the School of Mines.

However, it was to be his initiative which took the unequivocal step of approaching Council in 1923 with the recommendation that Geology should take over the original medical school on Leith Street, when that was vacated by Physiology.

The actual date that Benson led his department to its own roof  is open not clear but it seems most likely that the move was effected in 1927, when Geology and Chemistry moved in to share the old Medical School.

That situation so remained until Chemistry removed to its own purpose built new building in 1973, when Geology enjoyed the leadership of Coombs.  As for the building itself, the nucleus was built in 1878 as part of the University building.  Since that time, five additions have been made, structurally in uniform with the original, the last two on the then northern and southern extremities, in 1914.

A good record of Geology staff and student group photos, along with many other photographs, is available on the Otago Geology Archive website linked below.