Success due to support, medication and sheer determination 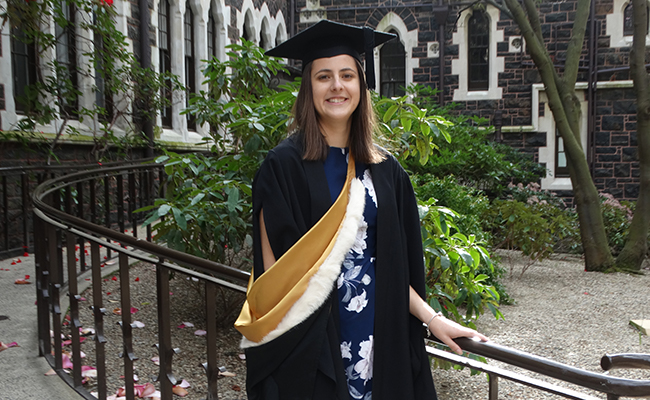 Renee Bond graduated with a Bachelor of Commerce on 29 August.

Renee Bond lost count of how many times she left lectures because she was going to pass out, how many classes she missed, or how many nights she spent in hospital in the past four years.

But she’ll never forget the lecturers, staff, family and friends who helped her get through the past four years and graduating with a Bachelor of Commerce majoring in Accounting, on Saturday.

“I honestly could not have done it without my parents, sister, grandparents, aunts, uncles, and cousins all cheering me on.

“The support I received from majority of my lecturers and course coordinators was extremely helpful … but I would like to make a special mention to Nicola Beatson and Ros Whiting, who both helped me substantially whether they know it or not. Words cannot describe how thankful I am for their help and support.”

Renee’s list of medical complaints is long, in fact she doesn’t talk about them all “because it would take too long”.

Now 23, she was suspected of having Meniere’s disease – an inner ear disorder that leads to dizzy spells and hearing loss – before attending Otago in 2016.

She developed the symptoms of Postural Orthostatic Tachycardia Syndrome – which include a fast heart rate, dizziness and fainting - in her first year of study and was officially diagnosed the following year.

At the end of second year, Renee was diagnosed with Systemic Lupus which caused extreme fatigues, rashes, joint pain and stiffness.

In her third year of study recurrent ear infections developed into Mastoiditis, a serious infection of the prominent bone behind the ear. It required two surgeries.

The combination of these factors led to severe weight loss and in March last year a nasal feeding tube was necessary for six months.

“It was a bit of a juggling act at times to make it all work. My conditions tend to fluctuate, so when my symptoms were at my normal manageable level, I would try to attend University as normal. However, during other times, when my conditions flared, I would often have to stay at home or sometime need to go to the hospital.”

She says the illnesses had a huge impact on her studies, but she never considered giving up.

“It was a bit of a juggling act at times to make it all work. My conditions tend to fluctuate, so when my symptoms were at my normal manageable level, I would try to attend University as normal. However, during other times, when my conditions flared, I would often have to stay at home or sometime need to go to the hospital.”

On one occasion, Renee left hospital to attend an exam.

“The morning of the exam I was given intravenous medications to control my symptoms. I disconnected from my IV fluids and then left the hospital to go sit the exam. Although I was not in the best state physically, I had put in too much work for this exam to miss it. As soon as I finished, I went straight back to the hospital and was connected back up to my IV and had a feeding tube placed a few days later.

“I must admit, it was not my best exam ever, but I am very proud of myself for making it to the exam despite everything.

Learning when to say no, or that she was too unwell to do something was vital, she says.

“By learning to listen to my body and recognising that it’s not a sign of weakness to say that I am too unwell to complete the task at hand, I was able to stay in slightly better control of the situation,” she says.

“I have learnt a lot about myself throughout this time and have learnt that I am a lot stronger and capable than I ever believed I could be.”

Many people told her to quit University to concentrate on her health, but that was never an option, she says.

“One thing I didn’t truly understand until becoming unwell is the stigma around those who are chronically ill. I soon found out that when your illness is visible or known about, some people are very quick to try to impose limitations on what they believe a sick person is capable of achieving.

“It sounds cliché, but I just wanted to be me and reach the goals I had set out to achieve, even if it was to take me slightly longer than I had originally planned.”

And now, with her degree taking pride of place on the mantelpiece, Renee is turning her attention to the future and her goal of becoming a chartered accountant.

“New issues do come up every now and again or my conditions flare but dealing with them just becomes part of my everyday life. I try my best to just keep going with my life and just take things as they come.”