No such thing as 'I don't have the time', graduate says 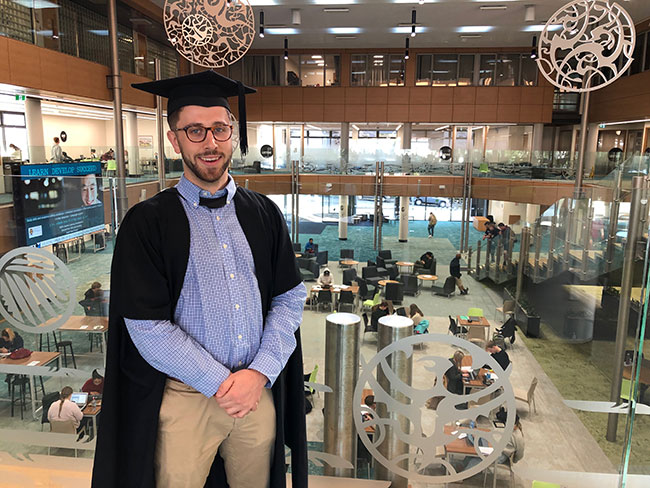 Tyler Haslemore is looking forward to having a little more time on his hands after balancing study with an international ice hockey career.

Tyler Haslemore hasn’t rested a lot in the past couple of years.

Something had to give so he could fit his study, work and ice hockey commitments into each day, but it has paid off.

He walked across the stage of the Dunedin Town Hall on Saturday with a Masters of Finance with Distinction, having previously earned a Bachelor of Commerce, majoring in Finance. Since leaving Dunedin, Tyler has started his career in Wellington, working as a corporate finance analyst at Deloitte.

“There’s no such things as ‘I don’t have time’. Once you prioritise your life, you make time for everything,” he says.

And make time, he did. As well as keeping up with his studies, Tyler’s weekends were spent officiating ice hockey, often out of Dunedin. In the future, he has aspirations to travel to Europe to further his ice hockey officiating career.

“I’ve skated since I was 5-years-old, playing hockey till I was 13, before taking to rugby for the remainder of my schooling years.

“I often officiated hockey in Gore to earn some extra money, and when I came to University [in 2015] I reached out to the local club to let them know I would be keen to officiate as a way of earning a bit of extra cash.”

His responsibilities quickly increased. In 2016 Tyler was selected to officiate in the NZIHL — New Zealand’s top ice hockey league — and the following year he was officiating his first international tournament.

“In November last year I packed my bags and moved to Canada for two and a half months to referee hockey. I refereed 155 games while I was there, roughly two to three times the number of games I would referee a season in NZ,” he says.

“When I left for Canada I was yet to complete my thesis on CEO pay and performance sensitivity in New Zealand. My days would consist of writing in the mornings and refereeing in the evenings and it took me until mid-January of this year to complete it.”

Ice hockey was just one of the jobs he held down. At the end of 2016 he travelled to Sydney to work for his sister, who is the founder and CEO of advertising agency Ultimate Edge Communications (UEC). His summer job ended up lasting almost two years.

“After returning to New Zealand I took on the role as her accounts officer. This meant I was invoicing clients, paying suppliers and doing financial analysis remotely from NZ. During my university holidays I would spend my time working in Sydney.
“For close to two years of my university, and the busiest two years, I was also working 60 hours a month as the UEC accounts officer,” he says.

This meant late nights and early mornings were standard and Tyler adopted a methodical approach to life.

“There were often times where I felt I had bitten off more than I could chew and as a result I often worried my academic performance would suffer.

“During my last year at uni, most weeks we would work 70-80 hours, and when I had hockey in the weekends, it would mean I had to get the work done earlier in the week.

“So it was all about planning ahead, knowing what I had on and then creating a plan to make sure I was able to achieve everything that I wanted to. Also, the lecturers in the finance department were incredibly accommodating. When things were tight they would often give us additional time or resources to ensure we were able to deliver our best product.”

When asked what advice he had for incoming students, Tyler referred to the advice he once received from one of his high school teachers.

“My teacher once told me ‘you get what you deserve’. At the time I didn’t think a lot of this. However, when I reflect on my time at university he really did hit the nail on the head.

“In my last two years of uni I worked incredibly hard on my studies, and I got the grades to show for it … when you do the work you get what you deserve.”

He also warns to never settle for “being good-enough. It is imperative to take majority of the opportunities that are offered to you. The Business School at Otago has an abundance of extra-curricular activities and it is important to take as many of those opportunities as you can in order to continually up-skill yourself.”