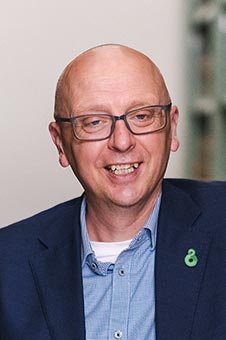 Professor Tony Ballantyne, FRSNZ, is Deputy-Vice-Chancellor External Engagement at the University of Otago.

The External Engagement Division is responsible for raising the profile of the University and attracting high quality domestic and international students to study at Otago. The Division embraces a global outlook and leads and promotes activities to increase engagement, both nationally and internationally, and seeks to build lasting relationships with key stakeholders. The Division includes Development and Alumni Relations, Centre for Asia-Pacific Excellence, Communications, International, Marketing, Schools Liaison, Undergraduate Entrance Scholarships and the Auckland Centre.

Tony is recognised as a world-leading historian of the modern British empire. He has worked extensively on the development of colonial knowledge, changing understandings of language, religion and race, and the uneven “webs” of exchange and connection that gave the empire shape.

In recent years, much of his research has come to focus on the changing place of New Zealand within the British Empire. He has published extensively on missionaries, literacy and print culture, cultural mobility and histories of place, and empire and colonisation in cultural memory. He is currently completing a volume on the changing place of James Cook in New Zealand memory and culture.

His current research primarily focuses on the development of colonial knowledge in southern New Zealand, a long-running project that was originally supported by a grant from the Marsden Fund of the Royal Society of New Zealand. He is currently working on a set of related monographs on this material, including a study of the collector and historian Herries Beattie.

Tony has often worked collaboratively. He has a long-standing collaboration with Antoinette Burton from the University of Illinois. Their most recent works are Empires and The Reach of the Global, 1870-1945, published by Harvard University Press; and a co-edited volume entitled World Histories From Below: Dissent and Disruption with Bloomsbury Press, which is into its second expanded edition.

He was elected as a Fellow of the Royal Society of New Zealand in 2012 and in 2016 won its Humanities Aronui Medal for sustained innovation in Humanities research.

Tony is currently on the editorial boards of: