From the archives: A life worth celebrating

What started as plans to hold a small ceremony in Waimate to mark 100 years since the passing of a local legend, turned in to an all-day celebration of her remarkable if somewhat short life.

Commemorations Group Chair Sandra Coles says it quickly became obvious that many in the town and further afield wanted to pay their respects to the pioneering graduate of the University of Otago.

“It turned from something little to something major for the town of Waimate. The response from the local community was nothing short of amazing,” she says.

The group contacted as many of the Cruickshank family as they could with around 30 descendants from all over New Zealand attending the celebrations.

“The only thing that we couldn’t control was the weather, and although there was a bit of ‘Scotch mist’ the day was still a great success,” she says.

Celebrations began with a blessing at Dr Cruickshank’s graveside. This included the playing of ceremonial bagpipes, with two of the three pipers being Cruickshank descendants. (Although Dr Cruickshank didn’t have any children of her own, her siblings did). 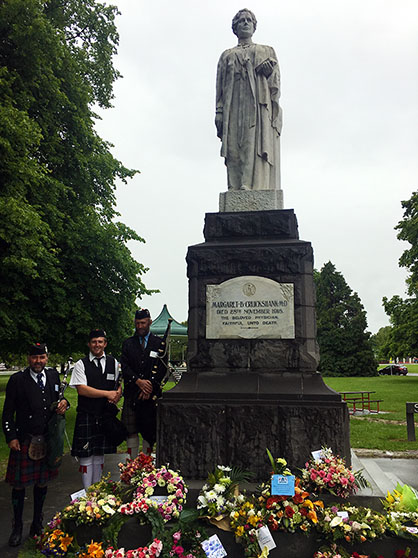 From there, the commemorations moved on to Bushtown Heritage Park where family members planted a totara tree (historically totara forests covered the local area) followed by lunch at Waimate Main School where school pupils dressed up in historic costumes to mark the day. After lunch, a Māori welcome and a blessing took place at the statue of Dr Cruickshank, with wreaths being laid by family members and a large number of local organisations and individuals. This was followed by a function at the Waimate Events Centre.

The day concluded with the switching on of floodlights on the statue itself in the town’s Seddon Square. The installation of the floodlights was promoted by a local doctor and they have continued to be turned on every night since the centenary.

A limited edition commemorative stamp and First Day cover was issued on the day and quickly sold out.

Mrs Coles says the day was a great success.

“We had a wonderful day and it was great to meet so many of her family.”

She says Margaret Cruickshank had “quite a hard life. Her mother died when she was only 10 years old and she had to help bring up her young siblings.”

She and her twin sister Christina were born at Palmerston in 1873. They were joint duxes at Otago Girls’ High School. Margaret was the second female medical graduate at Otago University in 1897 — the same year that fellow graduate Ethel Benjamin was the first woman to qualify as a lawyer in New Zealand. That same year Margaret joined the practice of Dr Herbert Barclay in Waimate (becoming the first female practicing medical professional). Christina was also an Otago graduate and pursued a career in education eventually becoming the principal of Wanganui Girls’ College. By 1900 Margaret was a partner in the practice and during the First World War Dr Barclay served in Europe while Dr Cruickshank shouldered all the case load. She succumbed to the influenza pandemic, aged 45, while working tirelessly to save the lives of her local residents. In 1923 a statue was erected in Waimate in the middle of the town. At the time the only other statues erected in New Zealand in honour of a female were for Queen Victoria.

The maternity ward at Waimate Hospital (now closed) was named after Dr Cruickshank, and a national 2007 pandemic exercise was called Exercise Cruickshank as a mark of respect to the amazing work that she did during the 1918 influenza pandemic. 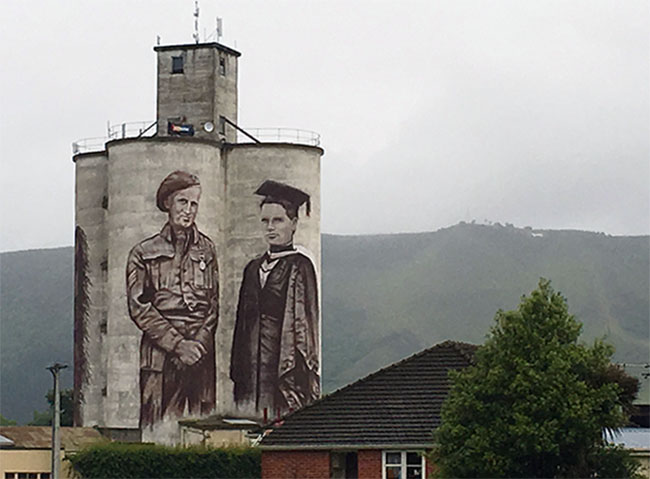 Dr Cruickshank is also celebrated in the town as one of five key former residents who are pictured in giant murals, completed this year, on the historic grain silos that dominate the town.

“It doesn’t matter where you are in town you can see these marvellous artworks of our famous former citizens,” Mrs Coles says.