Centenarian Emeritus Professor Alan Horsman spent more than a quarter of a century leading the English Department at the University of Otago and has helped shape the minds of the vast number of students who passed through his lectures and tutorials over many years. 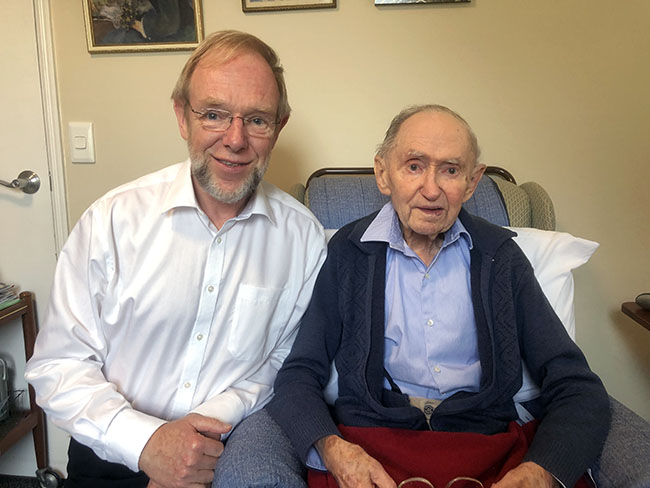 Becoming the Chair in English at Otago in 1957 was a great opportunity that he grabbed with both hands, bringing a young family back from England to the country of his birth. He says it was an honour to be offered the position and he knows that there was very stiff competition to get the role.

“The position as Chair in English was a very rare chance, as there were only four Chairs in English in New Zealand at the time, and I know there was considerable interest in the position,” he says.

When he started at the University in his late thirties he was considered by some of his colleagues to have looked “too young” to be an academic chair.

His parents came to New Zealand from England after the First World War and, after a stint in Napier, settled in Auckland. While he was a student at the then Auckland University College he worked full-time at NZ Customs and studied part-time, which meant making up the hours over the weekend.

“Being a part-time student was a pretty hard life in those days. The universities didn’t do a lot to make things easy for you then.”

On finishing his studies he received a postgraduate scholarship for two years at Oxford University. He completed a second master’s degree there and worked briefly on the supplement to the Oxford English Dictionary before leaving this role to take up the position at Otago.

“The department has grown tremendously in size since I began. We had an office all to ourselves opposite Allen Hall at the back of the Clocktower.

“We left that building when we got tired of moving around the buckets to catch all the drips when it rained.

“English is a marvellous subject it has the most wonderful literature in the world, poetry particularly, and it is hoped that students will have greater respect for the language and use it more carefully. I still love English as much as I ever have,” he says.

He received an Honorary Doctorate in Literature from Otago in 1994.

Alan’s son Andrew (69) completed an honours degree in Economics at the University of Otago then did his master’s and PhD at Manchester University.

“In the sixties there was a very small economics department (at Otago), with one chair, one senior lecturer and several lecturers.

“When I started my uncle John Horsman was one of my economics lecturers. He went on to write the economics textbooks used in New Zealand secondary schools for many years.

“It was a great time to be at university but I was possibly too young to appreciate it”, he says.

“We had the huge furore over mixed flatting, and the rule at the time banning students from having mixed flats. It was realised about this time there was no legal standing for this rule.

‘In my time at Otago, University College was built with two towers, one for men and one for women, with absolutely no connection between the two.

“I am so glad that I went to Otago it was a brilliant beginning of an academic life.

“My father was the University orator and he would give the address at graduation ceremony for distinguished people who were receiving an honorary degree. These speeches were always impeccably researched and always highly entertaining, with that to former University registrar John Hayward (after whom Hayward Hall was named) a real standout.”

On studying at university in England he says, “I was expecting to find that I had not learned as much as those at English Universities, but my Otago education stood me in very good stead.”

He lectured at York and Bath Universities, then trained for ordination and spent the rest of his working life as an Anglican parish priest.

Since retiring Andrew has written a book called The York Processional based on a 14th century church hymn book. He worked from the only copy that has been found remaining from the time, as the king demanded that all copies be destroyed.

“Those found with a copy were committing treason, a capital offence at the time.”

Andrew has spent much of the last few years painstakingly researching his book, and says that it is his Otago training that has helped him through.

“I remembered while researching for my book at Oxford University that I had in fact learned my skills in research while studying at Otago. Once you’ve been taught how to do research you can apply it to whatever field you choose to go on to.”

Andrew’s wife, Shirley, was the first of her family to go to university. Shirley’s grandfather Fred Smitheram was head caretaker at Otago and her father grew up in a flat in the Clocktower.

“Her dad had grown up at the University”, Andrew recalls, “and was absolutely determined that his daughter would have the benefit of a university education.”

Now based in York in northern England Andrew tries to return to Dunedin as often as he can, and usually visits his father at least once a year.

“Almost everywhere I go in Dunedin I come across people who say that they studied English under my father and look back fondly at their time there.

“They may have only been taught by him for one year but Dunedin is full of his former students who all speak very highly of him.”

Andrew is paying close attention to Brexit, and believes that “anyone who has studied first year economics at Otago could have told them that it (Brexit) would be virtually impossible to implement.”

“So I am very impressed with my Otago education.”

Both Andrew’s sisters completed arts degrees at Otago and he has two sons, one of whom works in banking in London and the other is a quantum physicist at Grenoble University in the South of France.

His younger son Dominic is spending Christmas in Dunedin with his grandfather Alan.

In honour of Alan’s more than a quarter of a century spent leading the English department, there is now a prize that recognises his contribution to teaching at Otago University. Established in 2009 the Alan Horsman prize in English is awarded annually to the student with the highest mark in English paper ENGL 121, except when that student wins the Gilray Prize for the top aggregate marks in first year English, in which case the prize is awarded to the student with the second highest mark.