After a highly distinguished career, University of Otago alumnus Dr Stanley Paris and his wife Dr Catherine Patla are funding a huge boost to the Otago School of Physiotherapy.

The presentation of the inaugural Dr Stanley Paris Fellowships and Scholarships took place at the School in early December. In pledging more than $1 million to the University, Drs Paris and Patla are encouraging research and advanced practice initiatives in musculoskeletal and orthopaedic manual therapy (OMT) at the University of Otago School of Physiotherapy. 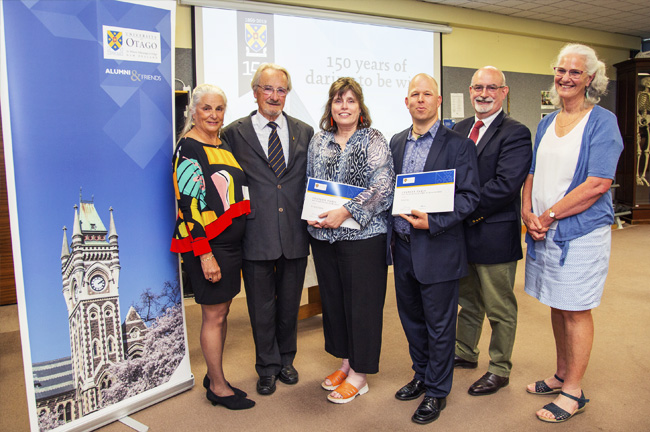 Internationally renowned physiotherapist Dr Stanley Paris graduated from Otago in 1958, and is a pioneer in manual and manipulative physiotherapy, an endurance athlete and a noted philanthropist.

The awards are named after Stanley G and Stanley V Paris, father and son graduates of the School of Physiotherapy.

Dean of the School, Professor Leigh Hale, says Dr Paris is one of the School of Physiotherapy’s most prominent alumni and a leader in Orthopaedic Manual Therapy. He received an Honorary Doctorate from the University in 2017.

Professor David Baxter says Dr Paris helped to develop the field as we know it today. “Along with his wife Catherine they’ve been very generous in supporting the School of Physiotherapy. They have previously supported a post doctorate fellowship and now are making a generous donation to support fellowships for staff, scholarships for postgraduate and PhD students and a visiting fellowship for a distinguished scholar to visit the school.”

As a young graduate in 1963, Dr Paris received a scholarship to investigate the treatment of backache in Europe and North America. He then returned to Dunedin and taught at the School and entered private practice with his father.

He began teaching courses in the area to colleagues in New Zealand in 1964, as well as writing his first book The Spinal Lesion. Dr Paris has since published more than 40 articles in physical therapy, medical and osteopathic journals. In 1966 he moved permanently to the United States, where he still resides.

His many sporting achievements include twice swimming the English Channel and completing the World Championship Ironman Triathlon in Hawaii. He motorcycled from Alaska to Key West Florida in less than seven days, and cycled across the United States in 30 days, at the age of 79.

“Where better to give back than to the school that my father and I graduated from, that has such a fine reputation that we think we could enhance.”

“I created the largest physiotherapy school in the United States at the University of St Augustine, which I sold six years ago, and now it’s time to give back. And where better to give back than to the school that my father and I graduated from, that has such a fine reputation that we think we could enhance.”

Dr Paris encourages new graduates to travel if possible as he spent several years travelling overseas after graduating, and says he found “we did some things better here than them, but there were some things that they did better than we did”.

For the new physiotherapy graduate the most important thing is that they understand that they are well grounded in the basics, and they must find a mentor who will take them under their wing to fully experience the profession, he added.

“So why do Catherine and I support the Stanley Paris Awards? Because we wish to fund development and research, and the goal of enhancing teaching of manual and manipulative therapy in particular, but musculoskeletal care in general.

“My biggest disappointments in the profession focus around our collective failure to market our success and our position as the preferred primary portal of all musculoskeletal conditions and indeed all forms of physical impairments.”

Dr Paris says when he graduated in 1958 it was the medical physician who was all powerful, and legally physiotherapists couldn’t see a patient without a medical referral, but today they have achieved autonomy and are respected health professionals. 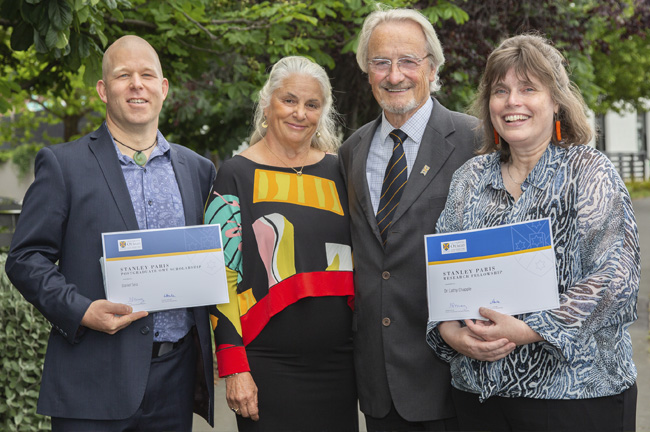 Inaugural Research Fellowship award winner Dr Cathy Chapple says the Fellowship is a great opportunity to do some new research that she’s very interested in and will help towards a full clinical trial.

“We are trying to determine the optimal time between treatments for those suffering from osteoarthritis in the knee,” Dr Chapple says.

The Fellowship is a prestigious research award that provides support to academic staff of the School to pursue a designated research project.

Postgraduate scholarship winner Daniel Sela says, “it’s wonderful to win the award, I feel very honoured, it will help greatly towards my studies.” Mr Sela is studying toward a postgraduate diploma in orthopaedic manipulation, and plans to eventually move on to doing a masters.

Now retired Dr Paris is currently developing a winery in Central Otago with help from his sons.

“My first son lives in Queenstown, he’s the managing director, and my second son is a Master of Wine who works mainly in Europe and North America. The three of us were together a few weeks ago tasting wines and putting the enterprise together. We’ve bought two mature vineyards already.”