Making your dreams a reality

Otago alumnus Mark Barnett (BSc Chemistry, 2000), has followed his motor racing dreams and spent more than 13 years working for some of the world’s leading motorsports companies. He is currently the Director of Research and Innovation at McLaren Racing in the United Kingdom. 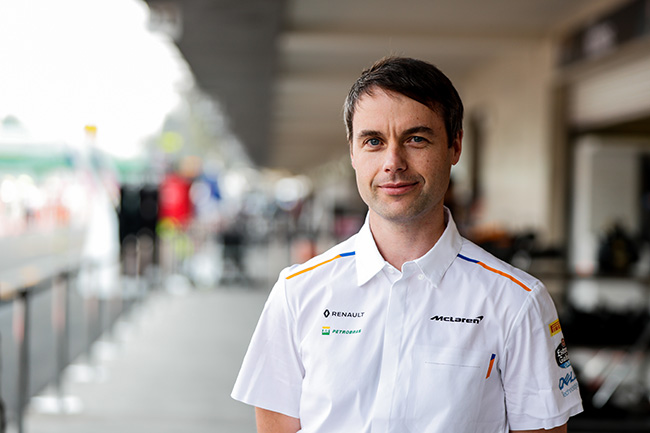 Originally from Southland, Mark grew up on a farm near Nightcaps and completed high school in Invercargill, before heading to Otago to study.

“I think Otago is a nice size and a lovely location to be a student. The centralised nature, particularly the shops and businesses, mean that the students all generally live together and provides for a great atmosphere to study in.

“I lived in Oxford for a long time after moving to the UK and many say that they are similar centres and I have to admit after spending considerable time in both I have to agree.”

Mark attended Studholme College in his first year at the University, then spent two years flatting before moving to Christchurch to study Mechanical Engineering.

“I always needed to believe in the application of what I was studying, and I decided early on that I wanted to do engineering as a way of working in motorsport. So, I added some Maths papers while at Otago to skip the first year of the Mechanical Engineering degree.”

While at university Mark worked each summer in the local motorsport series as the season fitted in well with the major study break. “I also did placements while at university at automotive related industries and managed to do some part-time racing overseas in Australia and America.”

Mark worked for a year at Christchurch motorsport company Autotek, then moved to Auckland to work for Mark Petch Motorsport. After around two years in Auckland he moved with his partner to the UK to try and break into Formula One.

Initially he worked in Le Mans racing, which is endurance car racing of six, 12 or 24 hours. After this he moved to the Williams Formula One Racing team in the mid-2000s to form their strategy department. 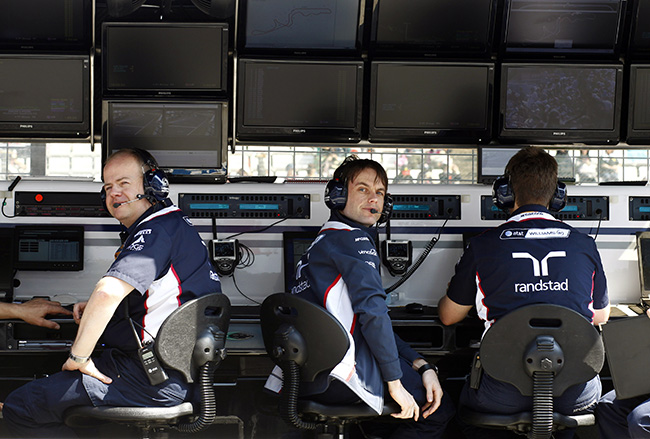 “This type of role has grown over time; teams now have up to nine staff solely focussed on optimising their operational performance and aiming for perfect strategy execution at each race.”

Mark says that Formula One strategy can be a highly-critiqued role as it is under public scrutiny. “It’s somewhat ironic that the final decisions in the process, often made with few known variables and with minimal time are often the most heavily critiqued. But the pressure and consequences also make strategy one of the most satisfying roles when it all comes together.”

From Williams he moved on to Force India, which is now called Racing Point, and then on to McLaren Racing in 2015, which he says was when McLaren was starting its relationship with Honda.

After around 10 years working in Formula One he decided to look more widely and began taking on different projects outside of it, including McLaren’s first attempt for 40 years at the Indianapolis 500 in 2017 (Mark is currently the Director of Research and Innovation at McLaren Racing). 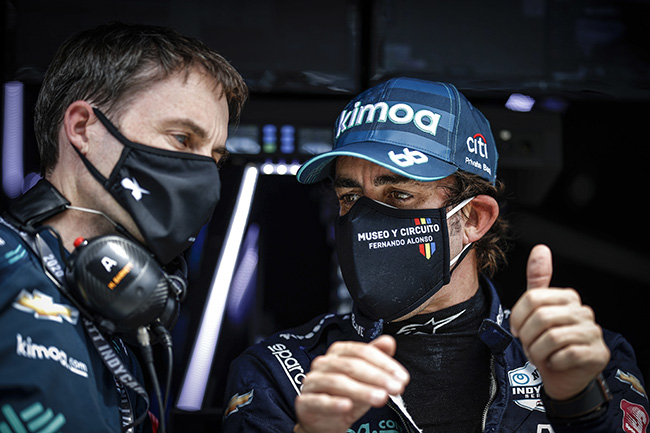 Mark at the 2020 Indianapolis 500 with Fernando Alonso

“Businesses nowadays are under pressure to adapt quickly and look for a competitive edge. McLaren Racing now offers an innovation programme to selected commercial partners, providing access to McLaren’s hardcore engineering capabilities and continuous improvement mentality to accelerate innovation. Leading the technical side of these innovation projects and the commercial application of Formula One technology has been a nice diversification since moving away from day-to-day race operations.”

And what would he say to a new graduate in the current environment? “I think looking back, my best advice to a new graduate would be to grow their network of contacts and to draw inspiration from their varied activities. I’d say it’s most important to find out what motivates you, what you have a passion for and pursue that.”

Mark says at Otago he had a great lecturer in Chemical Process Engineering who combined an academic element with more practical elements. “They were fantastic in supporting my interests by aligning my studies at Otago to skip the first year at Canterbury and they wrote supporting documents to ensure that this was the case.”

Mark enjoyed taking a range of papers while at Otago and did a Philosophy paper and a paper in Middle Age English History. “I think that’s a great thing to do as you have to solve problems in a different way and change your thinking and the student mix is not the same. I think these papers were just as important in my studies at Otago as the Maths and Chemistry, and I encourage anyone studying to take advantage of some of the other course offerings available.”

Mark says the New Zealand heritage (McLaren Racing was founded in 1963 by New Zealander Bruce McLaren) is really strong still in the team. “They celebrate Bruce McLaren’s contribution; it’s the founding element and the original logo has a strong Kiwi flavour. We have a fantastic CEO who values the heritage of the company and merges the Kiwi element with the cutting-edge aspects of the company.”