Pearl Matahiki leaving the helm of the Māori Centre 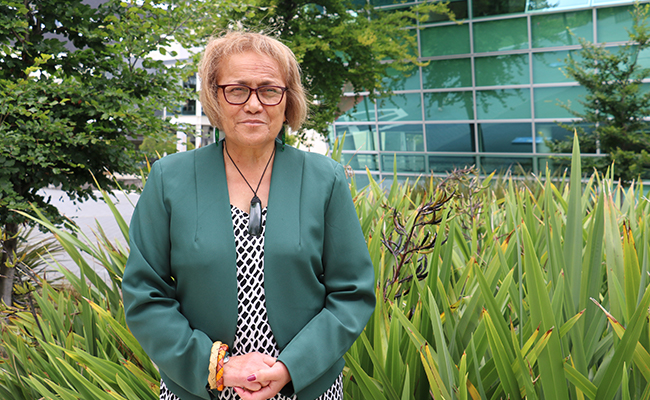 Pearl Matahiki (Ngāti Porou) is retiring from her role as Manager of the Māori Centre.

Helping tauira Māori through their tertiary studies has been a nearly two-decade journey for Pearl Matahiki (Ngāti Porou).

Pearl left her role as Tumuaki (Manager) of Te Huka Mātauraka (Māori Centre) on 26 February after 20 years at the centre.

Pearl’s ambition to build a support environment where Māori could succeed in tertiary education has been a constant thread through her time at Otago.

“When I first came in, I was shocked that there was minimal support for Māori students and the Maori Centre."

When she began at the University the Māori student roll was sitting between 600 and 800 students, now it sits at about 2300.

“I think I really focused on encouraging our students to be successful if they came here. They earned their right here. I think a lot of them felt that when they came, they weren’t sure if they were in the right place, and I had to get into their minds that they earned their place here like every other student.”

“I hope I’ve made a difference. To name one is to ensure the Centre is renowned as a leading Indigenous tauira support model within tertiary and “whānau on campus” that makes a difference for students, their whānau, hapū, iwi and the current staff.”

Many students had not enrolled as having Māori ancestry and Pearl has been an encouraging voice in embracing their whakapapa in their time at Otago.

“There are a lot of students that come here and they take a journey of their whakapapa. I remind them that it’s easier to get a degree than learn about your whakapapa/ genealogy because you’re taking your entire family back on a journey that may have been filled with sadness."

“I think I really focused on encouraging our students to be successful if they came here. They earned their right here. I think a lot of them felt that when they came, they weren’t sure if they were in the right place, and I had to get into their minds that they earned their place here like every other student.”

As the years have gone by Pearl has continued to encourage more inclusion of Māori in all parts of the University, from student support to academics and even marketing.

She is incredibly proud to have pushed for the publication of the Whānau Guide to be established.

“I saw the Parents’ Guide and I wanted to know ‘why can’t we have a guide for us?’ and when I look back at that, it became so popular with whānau that this year 100 books will be published in te reo Maori.”

As the Māori student roll has expanded, she would like to see staff numbers increased at Te Huka Mātauraka. Pearl describes the team as a gem who guide the tauira to succeed and provide a whānau away from home.

A thick skin has been essential to Pearl’s time at Otago, especially through sad times with students and with her own whānau. However, the good times have outweighed the bad.

“I think there’s enough of the good, and you see the success at the end that has made it worthwhile and I’ve loved it. I think if anything I’ve really enjoyed my job. If I didn’t, I would have left long ago - even though the students can drive you crazy.

Affectionately called Aunty Pearl by many past and present Otago students, the impact she has had on students, alumni and staff in her 20 years at the University is obvious.

Even now she has alumni running up to her for a hug and a kiss before they run off to find others and exclaim ‘Aunty Pearl is here’.

“It’s inspiring. I love it when I see many of them together in their workplace … It is good to see and good to hear what they’ve done.” 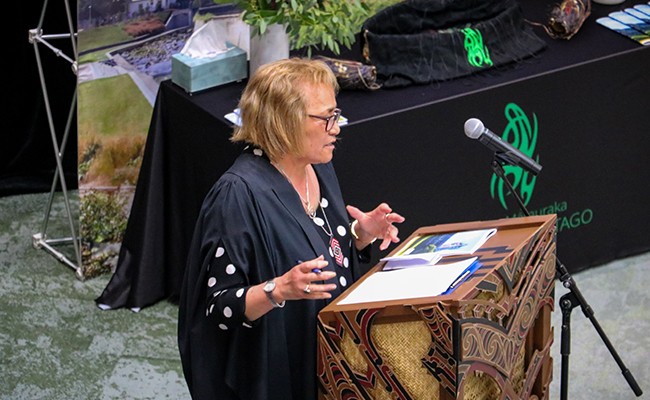 Pearl at one of the many Māori pre-Graduation ceremonies she has attended.

One of the final battles of Pearl’s role highlights her sheer determination in advocating for Māori at the University. In December, the graduation ceremonies were postponed but Te Heika Pounamu/Māori pre-graduations went ahead as scheduled.

Pearl pushed for tauira (students) to receive their tohu (certificates) at the ceremonies and while she was initially rejected, she persevered and in the final ceremonies the students received their degrees at Te Heika Pounamu.

What made it even more special was council member Susan Ellison presenting the certificates, one of the original attendees of the University’s first Māori graduation ceremony.

“Here in Dunedin, the weather may be cold, but it is the manaakitanga (hospitality) that keeps us warm.”

“This is Te Ao Māori (the Māori world view) in its cyclic motion similar to the koru. Who was to know 30 years later she would be the council member presenting graduates’ certificates/diplomas on behalf of the Chancellor and University of Otago.”

Pearl is ready to head off from Dunedin, to retire up north and relax with her whānau.

“Here in Dunedin, the weather may be cold, but it is the manaakitanga (hospitality) that keeps us warm.”

Pearl has a myriad of kōrero tuku iho (words of wisdom) for everyone she encounters and it is without a doubt that her presence on campus will be sorely missed.

Creative disrupters keeping it real
Otago alumni are the creative force behind the government’s online safety campaign, deftly using humour as a courier for a serious message.

Making a difference - Remembering Sophia
The first Sophia Michelle McMillan Crestani Scholarship was awarded in March this year and fundraising for a second is well advanced.