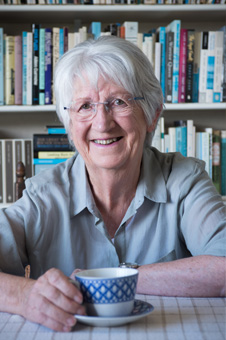 The nights are long this time of year, and what better way to spend the evening than with a good book?

To help get us through the winter, we approached renowned author Dame Fiona Kidman DNZM OBE for a few “good reads” recommendations. Dame Fiona is one of Aotearoa New Zealand’s most accomplished authors and is also Otago’s inaugural recipient of the Centre for Irish and Scottish Studies Irish Writers Fellowship, which she will take up in Dunedin in September and October.

Here, in her own words, Dame Fiona shares some of her stand out books from the year, along with some thoughts about what, for her, makes a good read:

“Fiction is my preferred read. Give me a strong narrative arc that keeps me longing to return to a book, measuring out time until I can get back to it. If it is written with sensuous prose, silky but not overwritten, so much the better. And, if it is fact based, whether in imagined situations or real events, please let the facts be right. I have had to deal with the fallout from anachronisms too often in my early writing life not to notice them when I read the works of others now. In other words, let me believe, feed my imagination without distracting it.

These three books have given me the greatest reading pleasure this year:

Hamnet by Maggie O'Farrell (Tinder Press 2020). This Irish writer has surpassed herself in her latest novel. It's about a woman called Agnes who lives in Stratford-upon-Avon in the early sixteenth century. She has to cope with her children, with plagues, with deaths, for the most part on her own. Her husband is away in London being a famous writer and at times it is hard to keep patience with him. But their love story is so remarkable that it sustains them, even through the death of a special son called Hamnet. The man is never named, but we recognise him as William Shakespeare. The prose is stunning in what I'd describe as a most subtly feminist novel.

The main protagonist in Douglas Stuart's Shuggie Bain (Picador 2020) is also called Agnes. I put off reading this very big novel for quite a while, even though it had won the 2020 Booker Prize. The prospect of enduring the pain of the title's Shuggie Bain seemed daunting. It's the 1980s in one of the poorest parts of Glasgow and his mother, Agnes, is an alcoholic who he longs to save from herself. The prose could hardly be described as silken, rather it’s tough and the dialect strong, the story as grim as it sounds. And yet, once I started, I read steadily and with growing awareness of its depth. My admiration for how Douglas Stuart has created a compelling, heart-rending, tragic, and sometimes straight out funny book is immense. The work deserves its applause.

If Stuart's work is an often thinly disguised (and subsequently acknowledged) account of experience, Charlotte Grimshaw's memoir The Mirror Book (Penguin Random House NZ 2021), is her own straight up life story. It recounts her role as part of a high-profile Aotearoa New Zealand literary family, that of C.K. Stead and his wife Kay. Grimshaw, who has written some very fine fiction of her own, explores a life that has had its fair share of difficulty. How she comes to terms with her separate identity is riveting reading. As part of the literary community, I decided in advance I must approach the work with as open mind as possible and consider it on its own terms, not as ‘gossip’. It is such a beautifully written and haunting book that it totally belongs to Charlotte.”

About Dame Fiona and the Irish Writers Fellowship

Dame Fiona’s writing career began in the 1960s with freelance journalism. The first of her 11 novels was published in 1979, and she has also published six short story collections and four collections of poetry. She has also written non-fiction, plays and memoir.

In 1988, Dame Fiona was made an Officer of the Order of the British Empire and became a Dame Companion of the New Zealand Order of Merit in 1998; both honours were for services to literature. She is active in the literary community, serving as president of the New Zealand Book Council from 1992 to 1995.

Dame Fiona is looking forward to living, writing and engaging with the public and alumni in Dunedin when she takes up the Irish Writers Fellowship later this year.

“I am astonished by my good fortune to be invited to take up the Irish Writers Fellowship. Being of Irish descent, I identify with the stories of how Irish people have fared in this country. It's an amazing opportunity to develop my own sense of identity and to work with the wonderful CISS team,” she says.

Otago alumni are invited to attend ‘An Interview with Dame Fiona’ to be held at the University Staff Club in Dunedin on the afternoon of Sunday 26 September. To register your interest please email functions.alumni@otago.ac.nz