We love hearing about interesting things our alumni have been up to, and we’ve gathered up some impressive achievements that have come to our notice recently. Read on for more about Octavia Cade’s recently published book The Stone Wētā; Ken Fullerton’s award-winning essay on Energy Efficiency and Social Equity and Marc Riedi’s epic first ascents of four peaks in Tajikistan! 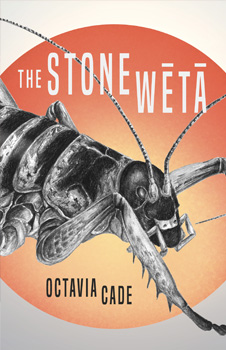 Otago alumna and Massey University’s Writer in Residence Dr Octavia Cade released her first book on 22 April. The Stone Wētā is a climate thriller about an international conspiracy to preserve climate data from governmental corruption.

The novel was inspired by news reports about scientists trying to save climate information from those who would destroy it. It follows the efforts of a group of women scientists to preserve research data in the face of government and industry obstruction. When the cold war of data preservation turns bloody – and then explosive – the scientists, all working in isolation, must decide how much they are willing to risk for the truth.

The novel’s plot lines include murder on Antarctic ice; a university lecturer’s car found abandoned on a desert road; and the first crewed mission to colonise Mars, isolated and vulnerable in the depths of space.

Octavia has a PhD in Science Communication from Otago and is the 2020 Massey/SquareEdge Writer in Residence.

Ken Fullerton, who graduated with a BA in History in 2007, recently finished runner up in the 2019 Gill Owen Essay Prize organised by the University of Technology Sydney (UTS) for an essay he wrote on the topic Energy Efficiency and Social Equity in Australian specialist disability accommodation homes.

After looking at a renewable energy installation at an Adelaide Specialist Disability Accommodation centre, Ken concludes that “if we can ensure people with disabilities experience the benefits that renewable energy can bring, we will simultaneously be promoting increased support, access to renewable energy and fairness across our society”. 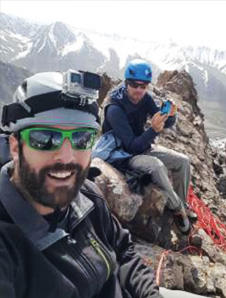 Marc Riedi and Moritz Waelde at the summit of Pik Wolfi

Former Otago Marine Science student, Marc, along with his friend Moritz Waelde, completed the first ascents of four peaks in Tajikistan in July 2019. “It was an unbelievable adventure” says Marc, who lives in Chur, Switzerland.

The peaks were in the Gorno-Badakhshan Autonomous Province/Pamir region. As well as Marc and Moritz, the team included Pamir guide Sharaf Saidrakhmonov. To get into the region, after flying to Osh in Kyrgyzstan, they travelled by 4x4 along the Pamir Highway for 12 hours to reach Murghab in Tajikistan, and then on another four hours to Yashilkul. From the Yashilkul dam they hiked eight hours to basecamp with the support of donkeys.

Their final ascent was Pik Wolfi, altitude 5104 MASL, on 7 July, in a seven-hour round trip.