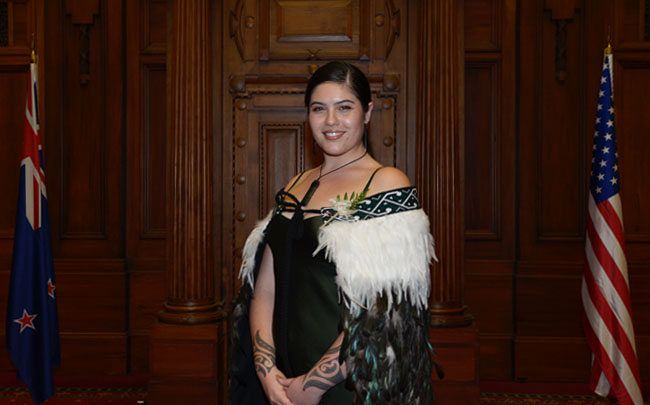 Otago scholar preparing to take up scholarship at Stanford

Recently named Fulbright New Zealand scholar Anežka Hoskin says her sister’s undiagnosed diabetes helped spur her interest in studying Genetics. “I first got into Medical Genetics after my sister was diagnosed with Type 1 diabetes. She nearly died as this was undiagnosed for quite some time,” Anežka says.

Currently finishing off her master’s thesis, Anežka is one of eight University of Otago students awarded 2020 NZ Fulbright scholarships. She plans to use her scholarship to complete the five-year PhD in Genetics at Stanford University in Northern California.

The Fulbright Programme was established in 1946 as an initiative of US Senator J. William Fulbright, to promote mutual understanding through educational and cultural exchanges between the United States and other countries. It operates in more than 155 countries, funding around 8,000 exchanges per year for participants to study, research, teach or present their work in another country. The New Zealand programme is jointly funded by the US and NZ governments.

Anežka found out about the Programme through the Māori Centre, and felt it was a great opportunity to continue her research. “You have to put a lot of research in and find out if you fit in and they have to decide if you are a good fit for the programme before you are accepted,” she says.

“I was on Stanford’s campus in early March of this year, and was accepted a month or two later.”

Anežka attended Takapuna Grammar on Auckland’s North Shore and did her undergraduate studies at Massey University in Albany.

“The main reason I came to Otago was to work with Professor Tony Merriman and Dr Philip Wilcox. I was interested in working with them on the Ngāta Porou Hauroa project doing genetic research on gout.”

Anežka spent a summer working as a research assistant on the project at Te Tairāwhiti/Gisborne District.

“The project is going really well - I’m just in the final stages of writing up my thesis. My master’s project looked at the genetic link for gout, diabetes and obesity.

“One of the genes I found has got a link to increasing Body Mass Index (BMI), but no increase in diabetes or gout risk.

“I think what we’re doing is really important to understand how our bodies work.”

Anežka’s just finished a summer course at Stanford University. Before the COVID-19 global pandemic struck she was planning to start working on her PhD at Stanford this month, but she’s postponed her studies until next year, to have more time to prepare and see how the pandemic unfolds around the world.

“I’ll definitely start the PhD programme in September next year, whether that’s online or on campus,” Anežka says. 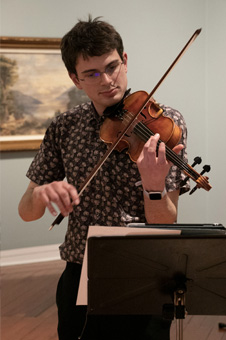 Travelling from Dunedin to Rochester, a city in New York state, is a long way to go for a half hour interview. But that’s exactly what Otago MusB(Hons) graduate Nathaniel Otley did in February, and the journey and the jetlag was worth every minute.

Last month Nathaniel was awarded with a Fulbright General Graduate Award which he will take up at Eastman School of Music in Rochester, studying for a Master of Arts in Music Composition.

“I was really surprised and thrilled to receive the award,” says Nathaniel, who is currently back home in Dunedin (having returned just before the borders closed behind him). “These application processes are very rigorous and intensive.”

To gain his place at the School he had to attend an audition and interview in February, and was competing with a shortlist of people from around the world. “It was a long way to go for an interview, and it makes it a very stressful half hour.”

Nathaniel says he applied to Eastman because of its good reputation and particularly because it has a big performance department.

“This gives me the opportunity to work with amazingly talented performers, which as a composer is always good.”

Nathaniel completed his degree at Otago with a double focus on performance violin and music composition. While he’s hoping to continue to do a little bit of performing and take some lessons at Eastman, his study will be in composition. The two-year course comprises electives in the first year, and an extended composition for his thesis in the second.

‘I’m quite excited by the large range of coursework options available for the electives, and also for the extended composition working with a larger ensemble, like an orchestra,” he says. “I’m interested in exploring delicate and unusual sound worlds using extended techniques to create textural fields.

“This includes looking at how we normally interact with and play instruments, and asking ‘are there other ways we can go about using this instrument to create sound?’”

He says a lot of the benefit of attending Eastman will be the experience he can gain in composing in a different environment, both culturally and academically. He’s also excited to work in such a big music school, with several orchestras and ensembles, including a new music ensemble.

“Being in that creative environment will be really stimulating.”

Nathaniel says his master’s will continue the work he started at Otago, and he is grateful for the opportunities provided by the School of Performing Arts.

“I really loved my time at Otago. The people at Performing Arts were really supportive and fantastic right the way through. ”

He says Otago provided him with a lot of opportunities and challenged him to do really well.

“I was able to get the kinds of opportunities that lead to these sorts of scholarships, I had a lot of help and encouragement to apply for things outside the University, including the NZSO Todd Awards, which provided me with high quality recordings which are important to have for applications.” Nathaniel won the 2019 NZSO Todd Corporation Young Composers Award, with his piece Biosphere Degradation, inspired by the soundscapes of struggling ecosystems and the threat of climate change.

Due to the COVID-19 pandemic, Nathaniel has deferred taking up his place at Eastman until August 2021.