“Dumbfounded and speechless” is how Otago alumna Dr Anna Crighton QSO JP described her reaction to the news she had been made a Dame in the New Year Honours list. 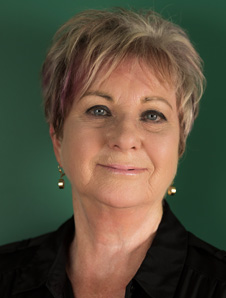 “I kept going back and looking at it, I thought I can’t believe that this is happening to me.”

Dr Crighton was made a Dame Companion of the New Zealand Order of Merit for services to heritage preservation and governance. She was one of 21 Otago alumni and staff to receive New Year Honours this year.

“Usually these awards go to business people, judges, sports people – this is a significant recognition for heritage and to receive acknowledgement at that level in the cultural sector is really wonderful,” she says.

Dr Crighton’s many heritage roles include establishing the Christchurch Heritage Trust in 1996, and being Chairperson of the Canterbury Earthquake Heritage Buildings Fund Trust from 2010 to 2014.

She has also been Director of the Theatre Royal Charitable Foundation since 2001, Chair of the Christchurch Heritage Awards Charitable Trust since 2009, a Board member of the New Zealand Historic Places Trust from 2003-2010, and President of Historic Places Aotearoa from 2010-2013.

She has also served on the Christchurch City Council and Canterbury District Health Board.

In 2012, Dr Crighton graduated with a PhD in Art History from Otago, and subsequently published her book "English, Colonial, Modern and Māori: The Changing Faces of the Robert McDougall Art Gallery, Christchurch, New Zealand, 1932-2002". 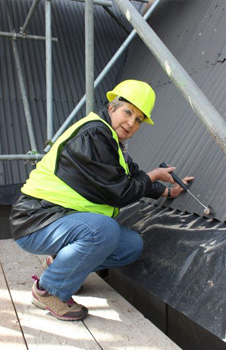 “I have always had a love and a passion for all things historical. Even as a young girl I had a sense of heritage and place – when I was living with my grandmother at the age of seven in her old villa full of exquisite bric-a-brac and paintings, set in gardens and an orchard, I had a wonderful sense of space, of detail. The environment felt right for me.”

Ever since then she has studied history, including Greek and Roman history, Classical Studies and Art History.

“I realised heritage values were a tangible thing, that places and buildings are part of our living memory in so many ways – architectural, societal, spiritual, and technological.

“Replacing them with new buildings if done in a hurried way overrides our past and impacts our community.”

She says part of the reason she was so astounded to receive the award was because “heritage protection is so challenging and so difficult, when I started seriously on that path in the mid-90s it wasn’t on anyone’s agenda, it was hard going.”

She believes two things changed the course for heritage protection since the 1990s. The first was Helen Clark becoming Prime Minister and taking on the Arts and Culture portfolio, significantly raising heritage’s profile, and secondly the 2000 millennium celebrations.

“All of a sudden things that were built in 1860 seemed to be regarded as ‘oh that’s two centuries ago’ and it made our heritage look older somehow.”

The key to heritage protection is fostering small groups, she says.

“It starts out as being local. You get local communities interested in local places and it goes from there.”

A self-confessed workaholic, Dr Crighton began her PhD after the earthquakes, and found it extremely difficult to do the work as she had to abandon her own heritage house due it being badly damaged.

“I was doing my PhD and all the heritage buildings were coming down around areas in Christchurch, it was devastating for me.

“A trip overseas re-inspired me, and I brought all that energy back. Seeing what people were doing to save their heritage, I came right back into the fight.”

One of her biggest roles was being involved with the restoration of the Isaac Theatre Royal, which needed deconstructing and reinforcing before it could be restored or in parts replicated. 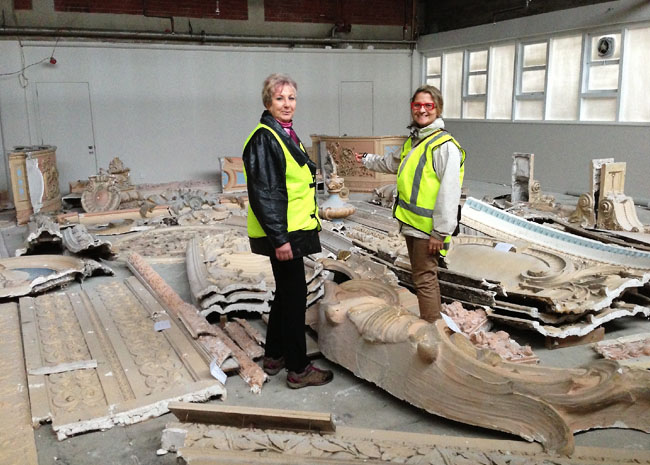 Dr Crighton (left) and art conservator Carolina Izzo surrounded by plasterwork salvaged from the Isaac Theatre Royal. Ms Izzo led the conservation team for replicating the plasterwork where damaged and the full restoration of the dome. Photo courtesy of Dr Anna Crighton

Currently the Christchurch Heritage Trust is involved with restoring two inner city buildings, Shands Emporium built in 1860, which is the oldest wooden commercial building in the CBD; and the Trinity Congregational Church built in 1875.

“First you have to have the funds to buy them, then convince the owner to sell them – often the ground is more valuable than the building.

“We’ve got these two shells of destroyed buildings, it takes money and time to get grants and funding and you work your way through it.”

Alongside the restoration of Christchurch buildings, the number of skilled heritage craftspeople is also growing, as the industry develops the techniques needed.

“The more the [heritage craft] industry grows the better it is for heritage.”

Dr Crighton also spends time helping individuals and groups with advice on the process of restoring buildings, and is working behind the scenes with the Ministry of Culture and Heritage on encouraging the development of regional heritage awards similar to the Christchurch awards.

She says she is full of envy for Dunedin’s “wonderful heritage retention”.

“Dunedin has the jewel in the crown with the Railway Station and it has amazing heritage buildings. It’s the only city left in New Zealand that has so many beautiful, wonderful examples of our nation’s past – wool stores, churches, the theatre and the university – it’s honestly got the pick of them in one place.”