Helping meet hunger in the community 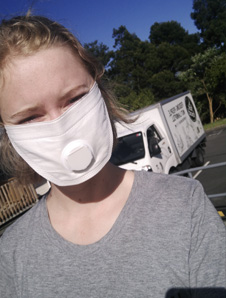 Otago alumna and current PhD student Heather Tribe has been multi-tasking as social media adviser, relief driver and board member for Auckland food rescue NGO Fair Food, as it responds to increased need due to the impact of the COVID-19 pandemic.

Luckily, Heather says that during the lockdown there was a huge increase in the amount of food available due to restaurants and cafes being closed, and exports being down, so they were able to meet demand.

Where previously they would rescue food from Countdown and Farro Fresh, they are now also being given food by companies including, Inghams, Turners and Growers, Zespri and Fonterra.

“The food we rescue are things that are perishable,” says Heather. “We focus on good quality, nutritious meat and fruit and vegetables.”

Heather, whose PhD is looking at food security and gender, says she was drawn to food rescue because she loves food and believes food rescue brings connection and hope to people.

“It’s the power of food, and the environmental and green side to it just makes sense.”

Before the pandemic, Fair Food was feeding around 500 families, or 2,000 people. In the first month of the lockdown period they rescued more than 120 tons of food, equating to 350,000 meals.

West Auckland-based, the NGO has a list of about 50 charities who apply for the food, and it distributes according to the means the charities have to pass the food on to their clients. The charities include The Salvation Army, which distributes all over Auckland and up to Whangarei; Vision West; Emerge Aotearoa; and a number of refugee groups, single mother and father groups, and education and budgeting organisations.

Their fleet of vans has also increased from two to eight, including large delivery trucks, as people unable to work during the lockdown volunteered their vehicles and their time.

Currently they operate from four temporary spaces, including the back of a fish shop, but they’re looking for a large, central hub to operate from.

“We really want to consolidate and expand our operation through one hub, but we desperately need funding to make this dream a reality. We want to partner with businesses and groups who share our values and dreams and have means to make this happen.”

Heather says responding to the need has been “a monumental challenge”.

“It’s been truly exhausting, but when you see the food banks with lines going down the street, it’s really good to feel you are doing something, knowing those people might not have eaten otherwise.”

Heather grew up in Waitakere, West Auckland, and completed her Master’s in Peace and Conflict Studies from Otago in 2018. She then went overseas for a few months and worked in the kitchens of refugee camps in Calais, France. Now, alongside her work at Fair Food, she is studying for her PhD, researching food security and gender.

“I’m looking at the role of food security in how it effects women, particularly during shocks, such as cyclones, and now COVID-19.”

(If you’re also keen to help out, Heather says they are desperate for another relief driver!)