Honor McKellar QSM: It's all in the words 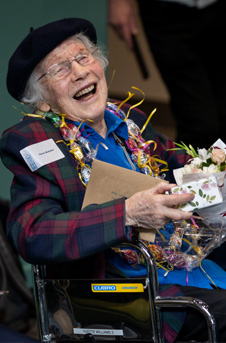 For Honor McKellar, music is all about words and movement, rather than notes and sound.

The distinguished mezzo-soprano and vocal teacher celebrated her 100th birthday in November at a reception at the new Performing Arts Centre at the University. The first full-time executant voice teacher on the staff of Otago’s Music Department, Honor has taught some of New Zealand’s most renowned singers and has made a huge contribution to the wider New Zealand music scene.

Born in Dunedin, Honor says her mother was musical, although she never heard her sing. However, helpers in the house went about their work singing, usually popular songs – and here Honor breaks into a couple of verses of Smoke Gets in Your Eyes.

“Some things you never forget,” she says.

Honor also remembers standing in the kitchen, her mother at the gas stove, “and I was singing, obviously overdoing it and throwing passion into it, and I remember mother being staggered”.

Her early influences include a preschool teacher, Miss Kennedy, teaching Montessori methods, which she is constantly grateful for – “Montessori is all about doing it yourself”. She had piano lessons with Miss Allen, where “all the time the accent was on the music, not only the notes”. And she took dancing with Dorothy Dean, who showed her how movement with music creates an important connection with the body.

“I hear people being retaught how to walk after having been ill and I long to make sure they’re doing it to music, not 1-2-3,” Honor says.

She didn’t have her first singing lesson until she was 16, with teacher Ida White who was a pioneering Dunedin musician.

As a student at Otago, Honor graduated with a BA in 1942 and MusB in 1944. Dr Victor Galway was in charge of the Music Department at the time.

“He was very encouraging, he used to have a weekly public class on music, and he would call on me to illustrate it.”

She then left for England – “as one did in those days” – and studied at the Royal Academy of Music in London from 1946-1949. She particularly enjoyed the opera class and was part of the production of the Vaughan Williams’ opera The Poisoned Kiss.

“It was my first experience on stage I think – other than being a crocodile once. There were three of us who were mediums, not quite human, we were mythical. I remember being offered a chair and mistily replying ‘we prefer to float about the ether’ and there was a roar of laughter, and it hooked me on making people laugh.

“The next day Vaughan Williams bumped into me in the corridor and said, ‘you’re the girl who does things with the words’.”

And as far as Honor is concerned, never a truer word has been spoken.

“My mind is all on performing. I think in my next incarnation it would be great fun to be an actress without bothering to sing.”
- Honor McKellar

“My mind is all on performing. I think in my next incarnation it would be great fun to be an actress without bothering to sing.”

She returned to New Zealand and became one of the original singers in the New Zealand Opera Company set up by Donald Munro in the 1950s. Back to the UK in the ’60s, she established a career as a session musician, singing in the Glyndebourne Chorus and with the John Alldis Choir.

London singing teacher Roy Henderson was influential in her development as a singer.

“Roy made a terrific impression on me. It was about trying to get the meaning of music across by other means, concentrating on what the body was doing.”

In 1971 she returned to Otago to become the first executant lecturer in singing, when she was appointed William Evans lecturer, a post which she held until her retirement in 1985. She petitioned the department to appoint a full-time pianist, with Maurice Till appointed to the post.

Honor received a QSM in 1989, for services to music, and continued to teach singing at the University as well as privately well into her eighties. She was made a Life Member of the New Zealand Association of Teachers of Singing in 2012 and has been a key figure in the Dunedin vocal community.

She says the highlights of her time teaching at Otago include putting on operas with Professor Peter Platt.

“He had no inhibitions about staging operas that were meant for somewhere like the Paris Opera House in Allen Hall. Some of them must have been hilariously bad.”

Many of her students have gone on to successful singing careers, including Patrick Power ONZM, Jonathan Lemalu and Matt Landreth. At her birthday celebration Jonathan Lemalu sent in a recorded message to Honor, singing her Happy Birthday and paying tribute to her as a professional singer and teacher:

“You often hear some say ‘if it wasn’t for someone I wouldn’t be here today’. It always sounds rather dramatic but, in this instance, for me you are that someone,”
- Jonathan Lemalu

“You often hear some say ‘if it wasn’t for someone I wouldn’t be here today’. It always sounds rather dramatic but, in this instance, for me you are that someone,” he says.

“I remember your boundless energy, patience, and instilling fun and joy in my music making.

Honor’s key advice to students is to “put it over, mean what you’re saying and singing”. One of the best ways she found to achieve this was for students to learn together as a class, to help “haul it out of” each other.

And of course, “it’s all about the words and the meaning”.