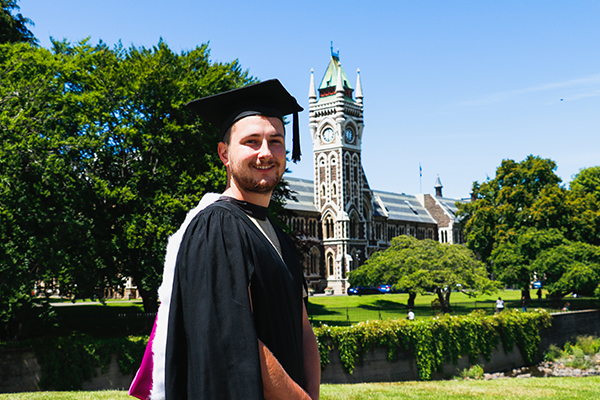 The first thing Jesse Miller did when he found out he’d received the 2019 Angela Allen Travelling Scholarship for top Bachelor of Radiation Therapy graduate was call his mum.

“She cried when she found out. It was quite a special day for me,” says Jesse, who took a 3000km road trip from Tauranga to Dunedin to make it to his graduation acknowledgement ceremony last week, only for it to be postponed at the last minute due to a security threat.

He was originally to have graduated in person May, but this too was postponed due to COVID-19 restrictions, so he opted to graduate in absentia. While Jesse was disappointed the ceremony had to be cancelled, he appreciated that it was “better to be safe than sorry”.

Jesse received his scholarship certificate earlier this month at a special morning tea held at his workplace, the Kathleen Kilgour Centre in Tauranga. The $5000 scholarship was established in 2003 by Charles Allen and is named in honour of his late wife Angela, a radiographer, who died of breast cancer. 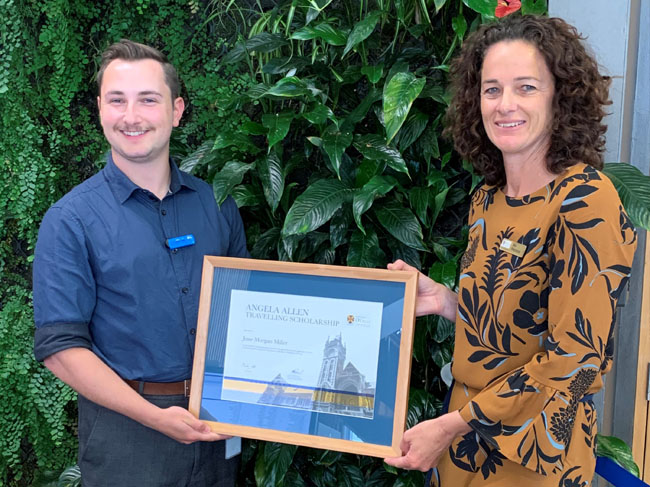 The Allen family have maintained an interest with the department and each recipient has received a signed certificate, personal letter and copy of Angela’s eulogy from Charles Allen.

“When I first received the phone call from the Director of the Bachelor of Radiation Therapy, Billie Mudie, I was ecstatic,” says Jesse. “I felt as if my years of study had been worth it and, overall, I felt a massive sense of accomplishment.”

Jesse’s current plans are to use the scholarship to attend either ESTRO or ASTRO, the European and American conferences for radiation oncology, which are regarded as two of the leading conferences in the field.

“I'd love to attend and see what the rest of the world is doing within radiation oncology, as well as how COVID-19 has affected practice elsewhere in the world. From this, I'd hope to bring back new ideas to my current practice in New Zealand.

“This may be a wee while off, unfortunately, with the state of travelling and large gatherings throughout the world. So I will remain patient for now and keep my hopes up!”

Jesse spent the last half of his final year of studies on a clinical placement at the Kathleen Kilgour Centre. From there he accepted a position as a Qualified Radiation Therapist at the centre and has been working as part of the team for a year now. His role currently involves radiation therapy treatment, planning and brachytherapy.

“I am grateful that I am exposed to different areas of my field and am able to continually improve my practice,” says Jesse. He has a particular interest in brachytherapy, also known as internal radiation, in which he has been given the opportunity to train.

“I find the concepts relating to this treatment modality intriguing as it challenges me to think about cancer treatment in a different manner than the most common form of radiation therapy, which is external beam radiation therapy.”

Although still quite early in his career, Jesse says he would like to participate in research and contribute to the advancement of radiation oncology.