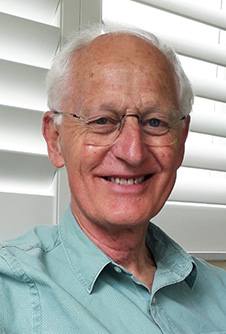 Dr Delahunt, who retired as a Senior Lecturer in Medicine at University of Otago Wellington in 2018, was awarded the Officer of the New Zealand Order of Merit ONZM for services to endocrinology and the transgender community. He graduated MB ChB from Otago in 1966.

He was one of the first physicians in New Zealand to use gender affirming hormonal therapy and his award citation refers to the vital role he has played in the development of transgender health care, at a time when transphobia was common within society and the medical profession.

He provided a significant majority of transgender hormone treatment care in Wellington for more than 25 years. Some people relocated to Wellington to benefit from his approach. He also liaised with Agender New Zealand, a Wellington organisation supporting transgender people and their families.

Starting out in the late 1970s, Dr Delahunt says he didn’t choose to specialise in transgender, rather that endocrinology management has evolved over time and “every 10 years or so some major condition came along”, which required a new approach or therapy.

Prior to the 1980s many transwomen would go to Sydney or Melbourne both for hormone therapy and any subsequent surgery. While he could develop hormone therapy, Dr Delahunt says he was not qualified to deal with the psychological side of management, including “people’s understanding and motivation of why they wanted to change”.

His work in the 1980s included management of hirsutism in women and gynaecologic endocrinology. With this background ‘it was fairly straightforward to provide hormone treatment for male to female transition. We did not have experience with the long-term responses to treatment and so followed people through their transition and beyond”.

When they began working with the hormone therapies in Wellington they reduced the female hormone doses to physiologic levels, and worked through regimes to suppress male hormone. Only 2-5 people a year wanted gender change hormones. Mostly people were in their thirties to fifties. Most were seeking male to female transition and had been clear about their gender identity for decades.

“We were lucky in the 1980s to have a joint transgender clinic with a Professor of Psychology at Victoria University Wellington, Prof Tony Taylor. Sometime after Professor Taylor retired a psychologist in Wellington Hospital, Jo Nightingale, coordinated group of about 10 psychologists and psychiatrists who volunteered their services, each for one or two cases a year, outside the hospital service and without charge.”

From about 2000 case numbers increased, exponentially from about 2010, with significant numbers also seen in the Sexual Health service. Today, he says there is an additional new population of teenagers and people in their twenties who recognise themselves as transgender, either male to female or female to male and who also want hormone therapy from an earlier stage. Some GP and University Health practices have facilitated support groups for these people.

In 2018, Dr Delahunt, and his co-authors, published a study in the New Zealand Medical Journal based on an audit of data from the Wellington Endocrine Service.

The report says the rise in people identifying as transgender seems likely to be related to the increasing societal awareness and acceptance of gender diversity. “Part of it is that society is more accepting,” says Dr Delahunt.

As well as this, access to the internet and discussion with peers may affirm a sense of transgender identity, improve understanding regarding options and increase confidence, leading to requests for physical transition options.

He says because of the surge in teenagers identifying as transgender it is mandatory for a psychiatrist to be involved in pre-treatment assessment. “However, previously there had been a major gap in New Zealand, in that most endocrinologists could not access publicly-funded psychiatric services for transgender assessment.”

One of the study’s recommendations is that an integrated, multidisciplinary approach needs to be developed to provide transgender guidance and services. These multidisciplinary groups should include primary care as well as secondary care endocrine, sexual health, mental health, paediatric where relevant and ultimately include the range of surgical specialists.

He says there is a need for joint meetings between the professional groups, so that clinicians can share their experience.

“We need to set up protocols, compare outcomes, and develop the working rules which respond to an individual’s issues.

“Please keep doing audits – both on those who have and who have not been treated.

“We need to continue this and extend it to New Zealand-wide. We need a combined audit to judge where society is going and where the resources should be.”

A career in Endocrinology

As a career, Dr Delahunt says endocrinology is “a very nice subject, as most people do get better. Over time, as technology or treatments became available we had to take up specific issues, and develop protocols ourselves. Examples were hyperprolactinaemia, hyperparathyroidism, precocious puberty, osteoporosis, menopause, changes in thyroid cancer and diabetes management. Guidelines for management could take decades to come out so that initially we had to use what was in the literature, perhaps set up a working group, and follow the outcome in a group of patients. Transgender management followed the same process.

“I’ve followed some patients for 10, 15, 20 years, a few from the age of five or six years. I have known many people I admire – who I might have caught up with once or twice a year. That component of clinical work is very rewarding.”

Dr Delahunt remains an honorary lecturer in the Department of Medicine at University of Otago Wellington, still attending journal and case discussions.

“To be able to follow the development of your profession as a hobby during retirement is very satisfying.”