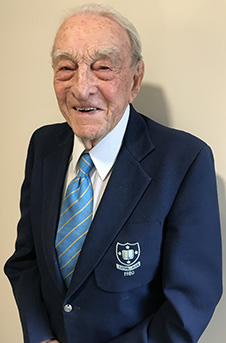 Les came to Dunedin with the National Mutual Life Assurance company in 1970, tasked with a commission to create a building for the company which would “put us on the map” in the Otago region. The result was the 12-storey Burns House on the corner of the Octagon and George St.

He promptly became linked to the OURFC and was responsible for the creation of the new clubrooms (the Arnold Perry Room) in 1971.

Les was on the committee of the club from 1973 to 1982, when he retired to Taupo in 1982. Over his years with the club Les held the positions of A team manager, as well as committee member, Club Captain, Secretary and President.

He pioneered projects for the club including the wine sale to raise money for the clubrooms, which was a huge success, and the Light Blue library at the clubrooms. He also set up the Hallenstein’s Annual sponsorship for the club, which ensured every Varsity team received a new rugby ball each year. Les was elected a Life Member of the club in 1982.

“During my 11 odd years in Dunedin, my management of the University rugby A team kept me young in spirit,” Les says.

“I enjoyed the regular end of season rugby trips to Central Otago to play a social game against the Tarras rugby team. Always on the way through Lawrence, our team enjoyed a wonderful roast dinner cooked by Paul Oliver’s mother.”

On the Central Otago trips Les says he would provide a stainless steel urn of hot coffee and hot saveloys plus tomato sauce for consumption when they left Dunedin.

“And cans of Speights beer to sell at cost which allowed me to control the liquor consumption too. Ritchies bus company gave me a discounted price because it also ensured we returned the vehicle in a tidy state!”

Les says he also had the pleasure of accompanying New Zealand University teams on trips to California, England, Ireland and Japan in 1976 and again in 1980 – “trips I will never forget!”

He was particularly involved with the Taupō Hospital and Health Society, helping to raise funds for medical improvements and spearheaded fundraising for the Turangi Community Health Centre.

“My principal achievements were the raising of over $2 million for the improvements in medical services in the Taupō/Turangi areas, and the development of a geothermal hot water system that saves the Lakes District Health Board over $100,000 in administration costs per year,” says Les, who has recently moved to Cambridge.

In a story about Les in the OURFC newsletter Blooz Nooz celebrating his birthday in September, he is quoted as saying his only regret on turning 100 was that due to COVID-19 he wasn’t able to have a big party and had to restrict celebrations to a gathering of his immediate family.