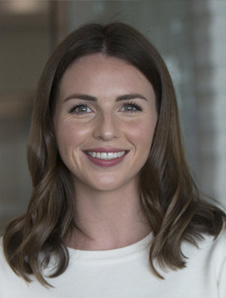 Law and arts graduate Maria Clezy credits her firm understanding of how the legal system works, along with the critical thinking skills she honed during her double degree at Otago, as laying the groundwork for her current recognition in the international legal directory World Tax.

Maria has been given a rating of Highly Regarded in this year’s directory for the second consecutive year, an accolade usually awarded only to partners or senior members of the profession.

“I was really pleased, I definitely didn’t expect it,” says Maria, who graduated from Otago with a Bachelor of Law with Honours and a BA in Politics, Philosophy and Economics in 2015. Now a solicitor in Buddle Findlay’s National Tax Practice in Auckland, she says she felt “lucky to be involved in some great work”.

The directory is a comprehensive global guide to all professions offering tax services, ranking firms and individual lawyers on their performance.

To be included in the directory, firms compile a range of cases highlighting their work, outlining the deals they have worked on and the individuals and other firms they have worked with. The directory then conducts interviews with the clients of the firms and makes a judgement as to how they performed. The only ranking that can be awarded to an individual is Highly Regarded.

Tax law hadn’t been on Maria’s radar when she joined Buddle Findlay in 2016 as part of its graduate recruitment programme.

“I didn’t study tax law at Otago, and I didn’t want to do tax law, I thought I’d be a litigator.”

However, she was put into the tax team and quickly discovered she enjoyed the work. Varying from day to day, her work includes providing transactional advice, drafting legal documents, dealing with the IRD and advising on best tax positions.


“I still find myself relying on things I learned at Otago. I received a firm understanding of how the legal system works and it’s something I fall back on quite a lot in terms of analysis of cases.”

“I find it challenging and I also get to work with lots of interesting people,” she says. “It’s turned out really well for me so far.”

And because she hadn’t planned on doing tax law, the experience has made her “more open-minded about the future”.

Maria says her degree contributed “in a huge way” to her current success.

“I still find myself relying on things I learned at Otago. I received a firm understanding of how the legal system works and it’s something I fall back on quite a lot in terms of analysis of cases.”

She also credits her BA as being really useful, along with the life skills she learned while in Dunedin.

“People say you’ll never use your [arts] degree but it’s been really useful in terms of critical thinking and understanding economic concepts. It’s made me a much more lateral thinker.”

Although she always wanted to do law, it was only after doing a tour of universities that she decided, on her last stop, to come to Otago.

“As soon as I saw all the other young people in town and looked at the halls I knew it was the place I wanted to be. It’s that whole campus town uni feeling. I wanted to move away from Auckland and do my own thing.”

She went to Arana College and then ended up tutoring law there for the next four years.

“My time at Otago was the basis really of so many things, like interpersonal skills – flatting was a lesson in resilience!”

In the future she says she would consider doing further study and would like to look into the broader business world.