The sun shone and town definitely came to gown in February, when Dunedin residents and their families set up picnics, played games and listened to the music on the Clocktower Lawn for the public launch of the University’s 150th anniversary.

Stilt walkers wearing oversized mortar boards, actors in historic costumes and bubble blowers mingled with the crowd, which was estimated to be between 2000-3000 people. Amadeo from the Otago Museum performed a variety of impressive science experiments and explosions in front of the Clocktower Building. 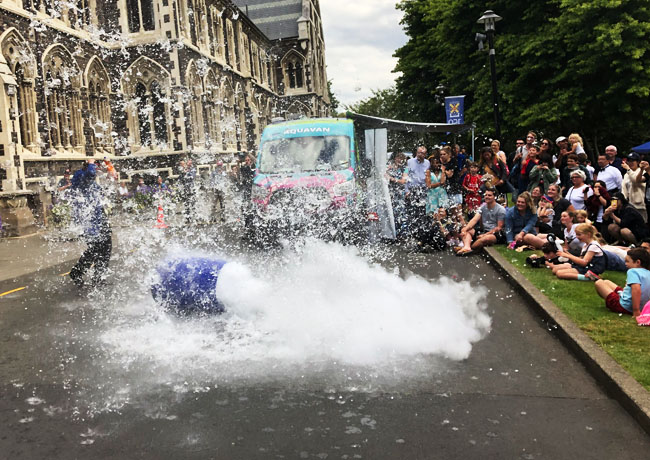 Resident Sonia van de Klundert agreed and said events like the picnic made the University “more approachable” for families, while Sa Maylanie Alai loved the family atmosphere of the event. 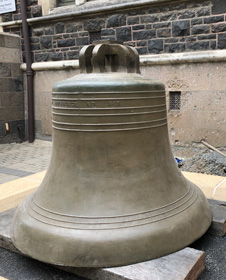 The newly-returned bell from the original University of Otago bell tower to be part of a new tradition for PhD students.

Both Dr Somerville and Professor Hayne said it was great to see so many children on campus. The event was livestreamed on Facebook and to Otago’s Auckland Centre, where they were also holding a barbeque. 150th picnics were also held in Hong Kong and Samoa.

On 13 March the OUAFC kicks-off the season with a special launch to celebrate the new Māori name for the club and showcase the commemorative 150th anniversary kit.

In what is believed to be a first for a South Island football team, the club has adopted a Māori name - Te Kapa Poiwhana o te Whare Wānanga o Ōtākou.

On the night, players will be presented in the 150th commemorative uniform to be used on special occasions. This year, the club is fielding six men’s teams and four women’s teams, making it the club with the largest number of senior teams in Football South, which encompasses Dunedin, South Otago, South Canterbury, North Otago and Central Otago regions.

The club is also holding a reunion for all players on the weekend of 9-11 August. For more information email contact@ouafc.org. 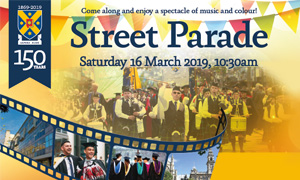 Street Parade, Sat 16 March, travelling from the Dental School to the Octagon

Friday 15 March sees the launch of Dr Alison Clarke’s book “Otago, 150 years of New Zealand’s First University”. The following day a lively street parade of students and staff will march from the Dental School to the Octagon.

“Colours” is the theme of the parade, chosen to celebrate the diversity and cultures of the University. Joined by pipers, drums and brass, all professional and academic staff and students are encouraged to take part, wearing their academic colours, cultural dress or outfits of their clubs, colleges or T-Shirts they’ve organised with work colleagues.

The event starts at the Dental School at 10:30am, moving down George Street and finishing in the Octagon. There will be an official welcome to the city from mana whenua, the Mayor, the Chancellor, the Vice-Chancellor and the President of OUSA.

The Sextet and Sexytet will be performing and the community will be encouraged to ask about the meanings of the different colours of the gowns and hoods. Volunteers will have colour charts of the regalia to engage people and there will be an information tent in the middle of the Octagon providing details about other 150th anniversary events and the University in general.

An exciting week of rugby is in store for rugby fans in the South, with Kansai Universities rugby team from Japan visiting Dunedin to play New Zealand Universities and the University of Otago during the first week of April.

The weekend of April 12-14 features both the Science Teller festival and the Tally Ho! 3 concert.

The Science Teller Festival keynote guests are bestselling author Mary Roach and science writer Michael Shermer, who will discuss the festival’s theme “Science and the Afterlife.”

Speakers and panel discussions look into what happens after we die, covering topics as diverse as immortality, the fear of ghosts, how modern children learn about death and the invention of hell. A debate between Michael Shermer and Professor Justin Barrett from the Fuller Theological Seminary tackles the question “Is there life after death?” Registrations are now open at https://www.otago.ac.nz/scienceteller/index.html

Tally Ho! 3 will be a celebration of the soundtrack of many of our lives through the 80s and 90s - the Dunedin bands we may have heard in the Union Hall at Orientation, rendered more sumptuous by the Dunedin Symphony Orchestra and our world-famous singer/composers including Martin Phillipps and Shayne Carter, along with more recent stars Nadia Reid and Anthonie Tonnon, and special guest soprano Anna Leese.

Please note that Tally Ho! 3 tickets are not available from the DSO office.

The official Queen’s Birthday Weekend Anniversary Celebrations start on Friday 31 May with the opening of the 150th University of Otago Exhibition at the Otago Museum at 7pm. The exhibition will showcase the University’s people, research and creative work from all the Divisions, and their benefits and influence on the global stage. Work will be presented from across the 150 years, from staff, research students and graduates.

Union Common Room, 4-8pm Commemorative packs are available for those who are interested at a cost of $65. The pack includes a copy of the recently written history “Otago, 150 Years of New Zealand’s First University”, a commemorative lapel badge, a name tag, map, weekend programme and other University related material. It can be collected on Friday night from the Union Common Room.

Campus Tours will leave from the Clocktower Building from 10 – 12pm.

The Academic Procession leaves from the Dental School at 1.30pm, marching to the Dunedin Town Hall, where a special-format Convocation Ceremony begins at 2.30pm. The ceremony is an historic event which last took place on the University’s centennial. It includes musical items, speeches and the awarding of honorary doctorates.

At 6.30pm there will be Fireworks in the Octagon, followed by the Anniversary Dinner at the town hall at 7pm.

The 150th Celebratory Church Service at Knox Church at 10.30am includes a Māori welcome, readings, a massed choir, a Pacific Islands Choir, and concludes with a release of doves from the Knox Church garden.

The Gala Concert “A Celebration of the University in Words and Music” will be held at the Dunedin Town Hall at 7pm. The gala concert offers a feast of music with connections to the University, from the early days of the Department of Music right up to the present and promises to be one of a kind - a mix of old and new, nostalgia and innovation, with some surprises in store.

The music is interspersed with readings of prose and poetry on Dunedin themes, some by Burns Fellows. These will be read by well-known Dunedin actors Peter Hayden and Lisa Warrington. Many of Otago’s most illustrious musical alumni are coming back to Dunedin to take part, including Professor Karen Grylls, Joel Amosa (winner of last year’s Lexus Song Quest), Kawiti Waetford and Anna Leese.

New compositions to be premiered at the concert are a fanfare entitled “Otago Flourishes” by Dr Peter Adams, and a special piece by Professor Anthony Ritchie entitled Owheo, with words by former Burns fellow Sue Wooten.

Forsyth Barr Stadium Tours run from 10 -12pm, and the Cameron Shield Rugby Match between Knox and Selwyn Colleges will be held at the University Oval at 2pm.

In the evening, a Pacific Student Koneseti will be held at the Dunedin Town Hall at 7pm. Organised by the Pacific Island Centre, it showcases Pacific students and their vision for the next 150 years of Pacific at Otago.

Events later in the year

A nationwide Winter Symposium series will be held from June to August, featuring Otago staff and alumni in panel discussions on a variety of topics relevant to the host city or region.

The Anniversary Gold Ball will be held at the Dunedin Town Hall on 10 August.

In September, the University hosts the UNESCO Play Festival from 13-20 September, showcasing new plays, covering a wide range of themes, from various UNESCO Cities of Literature and elsewhere in New Zealand. The programme will also feature workshops, panel discussions, and a series of forums on aspects of 21st century dramaturgy and playwriting.

The Heritage Festival hosted by Otago at the end of September will be a chance to celebrate the architectural heritage of the University. The festival runs alongside the Australasian Victorian Studies Association conference “1869”.

In early October, the Otago University Rowing Club is hosting an international universities rowing regatta to celebrate the anniversary. Universities from all over the globe will join OURC for a three-day series of high-quality racing, including crews from Russia, Japan, China and Canada. In conjunction with this event, OURC will be celebrating its 90thanniversary and will host an Alumni Reunion for all past rowers.

Throughout the year celebrations continue with a wide range of academic conferences and reunions, including the 50th Reunion of University College on Nov 22-24. Events around the country include cocktail evenings in Auckland on 3 May and Christchurch on 1 August. Alumni events held in regional New Zealand, the Pacific, Southeast Asia, the UK and North America during the year will also take the opportunity to celebrate the anniversary.

You can find further information on Pacific 150th events at: https://www.otago.ac.nz/pacific-at-otago/pacific150/index.html