Why we heart Otago: New books celebrate history and culture of Otago

The history book “Otago, 150 Years of New Zealand’s First University” by Dr Alison Clarke will be launched on 15 March at the University Staff Club. 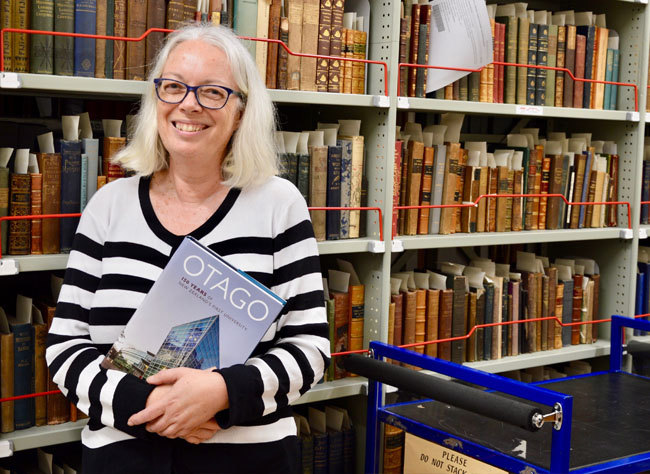 Dr Clarke, an experienced historian and author, began the task of researching and writing the book by examining previous histories and launching a blog which helped identify photographs as well as uncover a wealth of anecdotes, memories and information.

She says the biggest challenge has been organising the material and keeping it to one volume.

“With such an enormous wealth of interesting material, I’ve had to leave a lot out.”

Rather than a straight chronological history, the book is structured thematically, with around half the book focusing on the four academic divisions, Humanities, Sciences, Health Sciences and Commerce, and the remainder exploring other aspects of university life, the university’s campuses in Invercargill, Christchurch and Wellington, and some of the changes and challenges faced over 150 years. She also takes a good look at the evolving student body and student life at Otago over the years.

“In previous histories, there was not much written about Māori or Pacific students, women, international students or technology so they all became major focus areas.”

Dr Clarke describes the University as “not a perfect institution, it’s an organisation made up of humans, so it will never be perfect.

“It’s a place of contrasts – at once amazingly innovative and entrepreneurial, and also, at times, very conservative. Mostly it’s a place of talented people and always has been. When you look at the big picture and what the University has achieved around the world, particularly in the Pacific, it is pretty remarkable.”

You can purchase the book here: https://www.otago.ac.nz/press/books/otago701901.html

The rich history of Dunedin student flats is highlighted in this book by Sarah Gallagher and Ian Chapman, launched at the University in February. 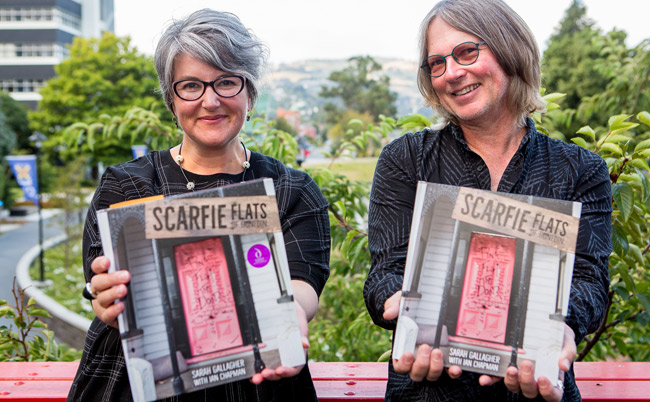 Sarah Gallagher and Ian Chapman each holding a copy of their new book, Scarfie Flats of Dunedin

Scarfie Flats of Dunedin, a collaboration between the Head of Otago’s Performing Arts Programme Ian Chapman and former Division of Health Sciences Social Media Adviser Sarah Gallagher, highlights and preserves the rich range of names and signs created over the years – dating right back to the early 1930s.

The pair share some of the stories of these flats, how they got their names, who lived in them, and what life was like there. The book also features essays by “Otagoites” about the place of these flats in popular culture, music and street art, as well as such erudite subjects as what it's really like to live on Hyde Street.

Mrs Gallagher has been researching scarfie flats named since 2000 and is the brains behind the Dunedin Flat Names Project, while Dr Chapman has published numerous books including The Dunedin Sound.

Mrs Gallagher told the 100 or so guests at the launch that the book began as a collection of photos of signs.

“And it continues to be that, but I found by sharing them, people connected with them, and stories began to emerge,” she said. “It’s been such a wonderful privilege to research people’s stories, and include your voices, it’s made this a much deeper, richer book than I imagined. I’ve loved seeing people’s eye mist over as they transport themselves back to their student days when retelling their stories - or when they’ve told me they’ve reconnected with old flatmates.”