Carole McArthur – on a mission

There’s an energetic charm about Carole McArthur. The passion in her voice underscores the tireless conviction in her work, making the noisy distractions of the café fall away.

Her field is complex, but her goals are very clear and despite her years in the US, there’s something very Kiwi in the way she goes about achieving them.

For a long time now, Carole McArthur has been on a mission. From growing up in South Otago and studying Zoology at Otago, she has taken her interest in immunology and combined it with her drive to help people with HIV, and has gone on to forge a distinguished career in HIV and AIDS research.

From her base at the University of Missouri-Kansas City, she has established research clinics in Africa and also focussed on humanitarian efforts to provide treatment for local people and to pass on the expertise to allow them to run their own programmes. 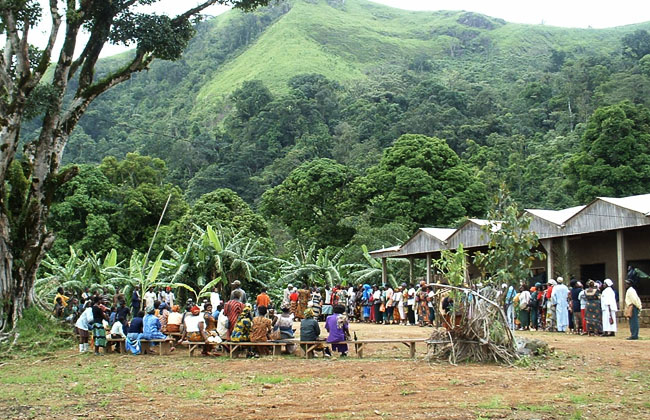 Along the journey, one early influence after leaving South Otago High School in Balclutha in 1965 was becoming a technician for Dr Betty Batham, the internationally-recognised director and developer of Otago’s Portobello Marine Station.

“Dr Batham actually obtained the funds from the Golden Kiwi [lottery grant] for the station’s first marine trawler, the Munida,” says Carole, who used to take the water temperatures and make up chemicals for Dr Batham.

“She was certainly a source of inspiration for me.”

Carole went on to graduate with a BSc (Hons) in Zoology in 1974, and gained her PhD from Otago in 1977. From 1977-1979 she did post-doctoral study at the University of Florida and obtained an MD degree from the University of Missouri-Kansas City in 1991.

Carole makes an annual trip back to New Zealand to catch up with friends and family.

“I’ve just been looking through some things in my mother’s house and came across some old Otago athletics certificates; winning the Otago championships for the 1500m and 3000m, and a record time for the Temuka to Timaru road race.” She was also on the track team in Florida.

“It’s amazing what you forget as an old lady,” says Carole, who appears to be anything but an old lady, and while she doesn’t run anymore, she loves showing her American Saddlebred horses.

Always interested in infectious diseases and immunology, Carole went on to work in genetic engineering and qualified as a clinical and anatomic pathologist. 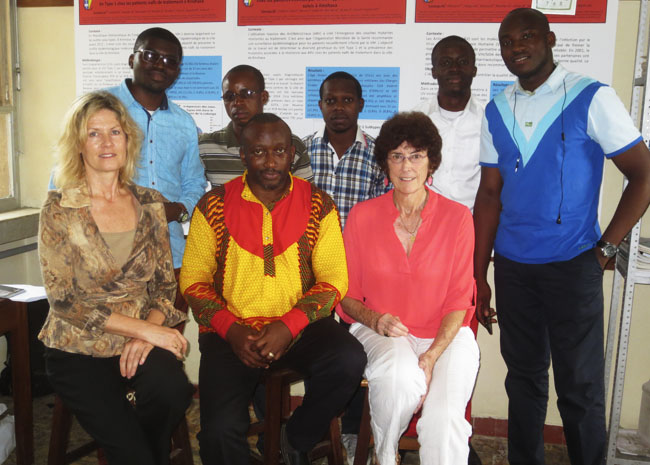 From her current base as a tenured Professor in both Dentistry and Medicine at the University of Missouri-Kansas City, where she teaches immunology and immunopathology, in the 1990s she set up research and treatment clinics in the Democratic Republic of Congo (DRC) and Cameroon. She is the Director of AfriHealth Partnerships International at the University of Missouri and visits the Democratic Republic of Congo (DRC) two or three times a year. 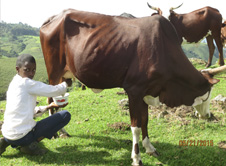 Falani boy obtaining milk for a study on TB

Her research in infectious diseases involves HIV and TB diagnostic tool development and HIV rare variant discovery. She is currently funded for characterisation of rare variants of HIV in the Congo Basin and has developed a research lab in Cameroon focusing on HIV drug resistance. She also established the first TB reference laboratory in the NW Province of Cameroon in 2004.

“I was driven by wanting to do something for HIV patients in the 1990s, when there were no drugs in Africa for HIV and I saw the devastating impact on women and children.”

“I went into that area in the Congo basin on a hunch actually, about the [geographical] area that was most valuable to study HIV from an evolutionary perspective, and that was Cameroon and Congo. This was based on the scientific information available at the time and it proved a good hunch.”

The work of American biomedical researcher Beatrice Hahn had shown that HIV probably arose from monkeys and various non-human primates.

“She had shown that in the laboratory setting, so we and other researchers in the field, added the complement to that; we corroborated Dr Hahn’s in vitro results with the in vivo data.”

Today the studies operate from 47 sites in Kinshasha, the capital of DRC, where physicians collect plasma to investigate HIV genetics. In the past year they have screened 18,000 people.

Hand-in-hand with Carole’s research has been a focus on providing treatment for local communities and passing on expertise.

She believes sustainability and relationships are the key to successful programmes, and attributes her success to relationship-building with the local communities, especially local tribes such as the Falanis in Cameroon, Fons (traditional leaders) and government officials. 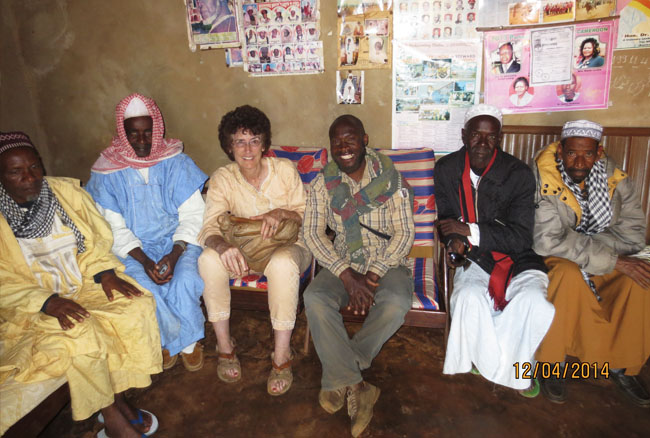 The Fon of Bamdzeng (second from left) meeting with Dr McArthur

“Building trust is critical and I spent about two years developing these relationships initially, as well as building the lab.

“Sustainability of the programmes is the key issue for the future. The training of local personnel and support from local community and government groups is critical.”

Carole’s other current research involves studying mother to child transmission of HIV, an HIV persistence study in the salivary glands of patients and a large HIV genetic study.

“When I look at our projects over the years I’m surprised at the enormous span they cover,” she says.

On the ground in DRC and Cameroon, she collaborates with federal organisations and her research is funded by corporate or government grants. She is currently waiting on the outcome of two new grant applications, as well as preparing a paper for Lancet which shows that current HIV prevalence in Kinshasa is much higher than recorded by international organisations.

Her team has developed an innovative way to collect data via a phone app, which she says removes errors and has doubled the amount of data received in a month, from 900 to 1700 patients.

“The app allows us to screen a lot of patients quickly, and to link them to viral loads, TB testing and all other aspects of HIV therapy.

“HIV patients get lost to follow-up, they can’t get to a hospital, they live in a village, they have no money and most have very few resources…the app allows us to screen a lot of people accurately and improve reliability of data.”

The two grant applications include a proposal to the Centre for Disease Control grant to improve diagnostics and access to drugs to more people, particularly women and children in DRC.

Her second application is to the National Institute of Health and is aimed at understanding the mechanism of HIV drug resistance with a goal to prevent the emergence of resistance.

Over the years, Carole says one of the most satisfying aspects of running the clinics is that it allows a wide range of students to visit and undertake research using their infrastructure. Projects have addressed patient adherence to HIV therapy and many other social science aspects by researchers wishing to undertake studies in resource-limited environments.

“You have as much experience in a month as years in a University because of the rich supply of patients; simultaneously you can impact their lives profoundly.”

She says there may be opportunity for a New Zealand student to study in the Congo next year. This could be clinical experience with another Otago graduate, Carole’s cousin Dr Trevor Parr at Vanga Hospital east of Kinshasa, or with Carole, doing HIV or TB molecular research, oral impact of HIV, hepatitis, parasitology or social science research. 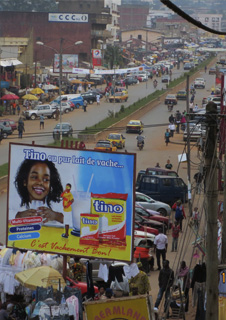 Bamenda in the North West Province and site of Mezam Polyclinic

“I was very happy about that. We set it up and the government came to review the clinic. They basically took the infrastructure we had developed to the provincial hospital down the road and built a new lab there to house it. This had a huge impact ensuring its sustainability. That’s what I wanted.”

She says her work has also contributed to biotechnology and diagnostic tool development and she feels the research being undertaken is also answering important mechanistic questions about the evolution of drug resistance, which is relevant globally.

“In the US there is still much HIV. Many people don’t know they are HIV positive. The quality of the therapy is very good now, however, but as new variants evolve in the Congo, these are transmitted to the rest of the world where the impact may be different.”

Throughout it all, Carole has applied a very Kiwi “let’s just do it” attitude.

“So many colleagues said “you can’t do this Carole”, - and you can’t do it alone, however, you can go out and seek like-minded people and get them engaged.” 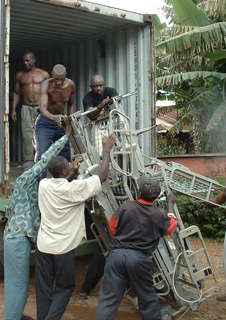 Unloading equipment donated from the US

On one occasion, she went round hospitals in Kansas City and gathered up donations of second-hand equipment, loaded it into a shipping container with the help of her students, shipped it to Africa, drove it through the jungle and unloaded it at the new lab.

While she has no thoughts of retiring from her work, when she looks at the things she’s achieved says she feels “darn good about it”.

“There have been times I’ve really asked myself is this having a good effect on local people, is there any chance people have any been taken advantage of - because there is a lot of opportunity for that - and I felt really pretty good about that too.”