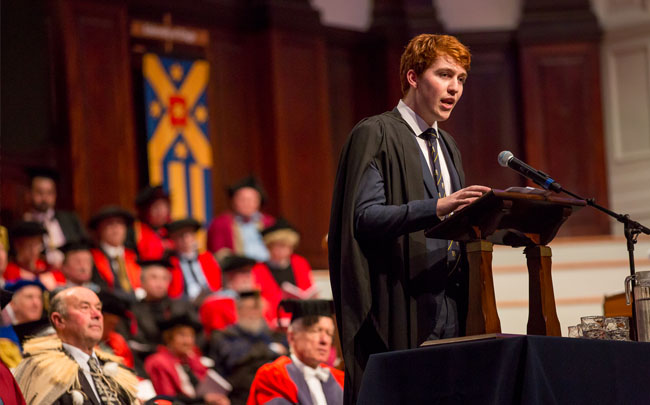 To be awarded annually, the prize was established in 2019 by the University of Otago through generous support from the New Zealand Business and Parliament Trust (NZBPT). It seeks to advance and encourage students to undertake a Master of Politics (MPols) degree with a strong focus around New Zealand politics.

The prize is awarded by the University Council, on the recommendation the Head of Politics, to a student enrolled in the Master of Politics programme who is engaged in research into the role of the New Zealand Parliament in governance, policy-making and the wider community.

James is studying for his MPols this year, and says he was “pretty stoked” and surprised to receive the award, as he was nominated by Politics at Otago without him knowing.

He says his year as OUSA president exposed him to working with charities, in particular the world of governance, the importance of political engagement and the need for charities to have a strong voice. His dissertation focusses on helping bridge the gap between government, politics and charities.

“The prize and the work of the [NZ Business and Parliament] Trust aligns quite well with where I’d like to take my career,” says James. Ideally, in the future he would like to work in either the public sector or be involved with charities.

NZBPT CEO Darryl Stevens says the Trust is delighted to be establishing a relationship with the University of Otago.

“We have had a long-time commitment to tertiary funding but historically this has been limited to two universities. In 2018 the board determined a more inclusive approach with the intention of recognising more universities. Otago is one of those universities,” says Mr Stevens.

“James will be a tremendous ambassador for Otago at the Wellington seminar and we hope he finds the connections he makes useful for his own research.”

“One of the streams in Politics is wholly focused on New Zealand politics and that is of particular interest to us. The Trust does not see the prize as a wholly financial thing – the board is keen to have engagement with our prize recipients and we look forward to James attending next month’s Machinery of Government and Parliament seminar here at Parliament.”

Master of Politics convenor at Otago Dr Chris Rudd says Politics is delighted that James has been awarded the inaugural prize.

“James will be a tremendous ambassador for Otago at the Wellington seminar and we hope he finds the connections he makes useful for his own research,” says Dr Rudd.

The prize is valued at $1,500 and in addition to the monetary component, the New Zealand Business and Parliament Trust invites the recipient to attend a round table and parliamentary seminar in Wellington each year.