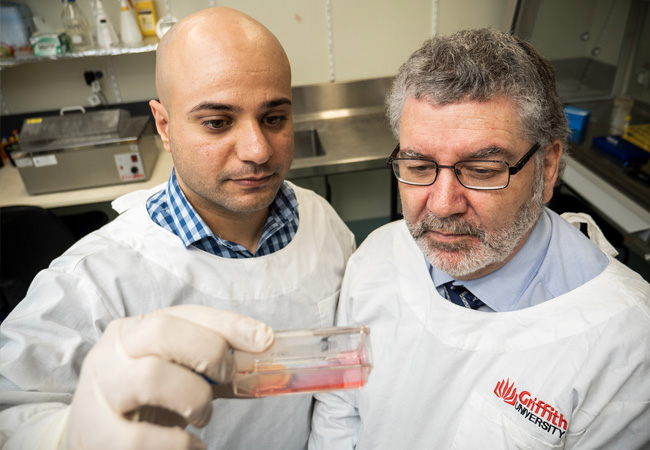 Otago Microbiology alumnus Professor Nigel McMillan is at the forefront of a major breakthrough in the battle against cancer.

Using gene-editing technology to target and remove cervical cancer tumours, he and his team at Menzies Health Institute in Queensland have eliminated cervical cancer in mice.

“You’re always looking to make a difference in the world, but you don’t often get the opportunity to reach a point as significant as this,” says Professor McMillan, who graduated from Otago with a PhD in virology in 1991.

“You’re always looking to make a difference in the world, but you don’t often get the opportunity to reach a point as significant as this,” says Professor McMillan

“I was in the lab where gardasil (HPV vaccine) was developed, and to see something like that go to the clinic was an incredible experience. Now to have made a breakthrough like this is really wonderful.”

Professor McMillan says it is the first cure for any cancer using the gene-editing, or CRISPR, technology.

The scientists used CRISPR to successfully target and treat the tumours, via injection, using “stealth” nanoparticles.

The nanoparticles search out the cancer-causing gene in cancer cells and “edit it’’ by introducing some extra DNA that causes the gene to be misread and stop being made.

“This is like adding a few extra letters into a word, so the spell checker doesn’t recognise it anymore. Because the cancer must have this gene to produce, once edited the cancer dies.”

From here, Professor McMillan says they have a pretty clear programme for starting clinical trials, with a grant application in for developing the technology into a clinically appropriate form and ensuring that the treatment is safe.

In three and a half to four years he hopes they will be ready to start on the first of two clinical trials, working with patients who have early-stage cervical cancer. Their trial would be conducted alongside the normal treatment of using lasers to target the cells.

A year or two after this, the second phase of the trial would focus on patients with metastatic disease – cancer which has spread, and who have already had all the normal treatment.

“We would be looking to deliver the technology straight into the bloodstream, where it would seek out and kill the cancer cells.”

He first began research in this area around 10 years ago, when he developed the delivery system for the technology. The CRISPR work began about four years ago, and the breakthrough applies the two techniques together.

Professor McMillan credits an “open and welcoming” research environment at Otago as laying the groundwork for his current success, although at first he studied medicine with thoughts of becoming a doctor.

“But having done my first year I got rather excited by microbiology and biochemistry,” he says. “I liked the mystery and the unknown of it.”

He spent his second year in the Departments of Biochemistry and Microbiology and then “fell into” research with Professor Gerald Tannock and Associate Professor James Kalmakoff.

“The Department of Microbiology was a great place to do research. The barrier between staff and PhD students was low; you were free to walk into anyone’s office. There wasn’t any intellectual class structure, which I’ve come across in other places.”

After gaining postgraduate scholarships, he went on to do his PhD in insect viruses.

“James Kalmakoff was my supervisor and he gave me a great foundation for my own students today. There was trust, space for creativity, and holding to account.

“It was an open and welcoming atmosphere in the lab, and a great grounding for success later on.”

An “all-round student”, Professor McMillan was a keen basketball player and coached University and some Otago teams, and played double bass in the New Zealand Youth Orchestra. He also played cello, which he eventually sold for a car.

He went onto work at the Hospital for Sick Children in Toronto with another Otago graduate and renowned molecular biologist Professor Bryan Williams – who happened to be Associate Professor Kalmakoff’s first PhD student.

Professor McMillan is now Director of the Molecular Basis of Disease Programme at the Menzies Institute within Griffith University.

He comes back to Dunedin now and then, takes a look at his old flats, and grabs a Speights and a Poppa’s Pizza.