The musical talent of the Wallace family has featured at three of Otago’s significant anniversaries. Family members joined together in Dunedin at Queen’s Birthday weekend to enjoy the family’s latest contribution to the University’s milestone celebrations.

In 1969, music student Margaret Wallace (née Simpson) composed a piece for the University’s centenary. Margaret’s Centennial Suite 1969 was performed by the Dunedin Civic Orchestra as part of the 100th birthday celebrations in 1969. 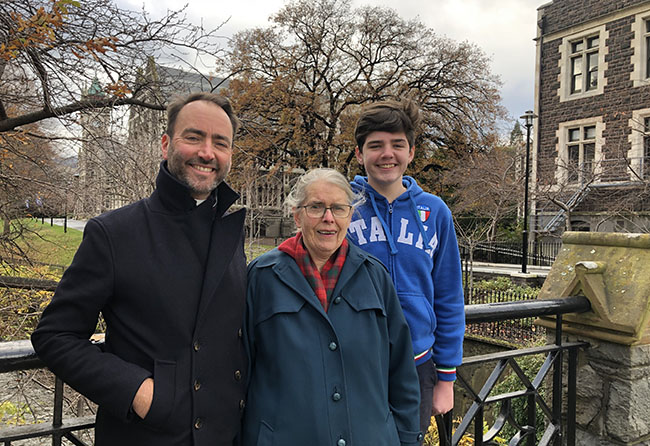 Fifty years later, Margaret, now 82, travelled down from Christchurch to hear her grandson Ewen Clarke-Wallace sing in the University’s 150th Gala Concert. Ewen, 15, is a member of the Southern Youth Choir, and sang as part of the specially-formed choir which performed at the concert.

In between the centennial and the 150th, Margaret’s son Michael Wallace, Vicar of Dunedin North Anglican Parish and Chaplain at Selwyn College, sang in the University’s 125th jubilee festivities in 1994 as a member of the Capping Sextet. Michael studied Music and Theology at Otago, and was in the Sextet from 1988-1994.

But the musical connections with Otago don’t end there – Margaret’s daughter, composer Alison Isadora who currently lives in the Netherlands, was Mozart Fellow in 2001.

At Queen’s Birthday, the Wallaces were enjoying the special family time at the 150th celebrations, and along with the Gala Concert had appreciated the “great stories” told at the Convocation Ceremony and the service at Knox Church.

“It’s been good to reflect on Sapere aude,” says Michael.

Margaret recalls that unfortunately she didn’t get to the concert in 1969 to hear her piece performed, as her children had the measles and she had to stay at home.

“While I was at Otago I was very busy with my children,” she says, “Prof. Platt (Blair Professor of Music) was very good and very encouraging.”

Margaret started with the piano but moved onto the pipe organ which she describes as her “dream instrument”.

After completing a BMus (Hons) and MA at Otago, Margaret earned a PhD in Music Education at the University of Canterbury. She taught music in Christchurch for some years, before returning to Otago in 1988 to serve as warden of Salmond and Studholme Halls, until retirement in 2002.

As a child, she lived in York Place from 1936-1945, and remembers seeing the capping processions in downtown Dunedin.

So far, four generations of Margaret’s family have studied at Otago. Her great-uncle Alexander McNab of Lawrence enrolled in 1892. He didn’t complete a degree but taught at Gibbston School for several years.

Since then, dozens of family members, including Margaret’s sisters, cousins, nieces, nephews and in-laws have come from around the country and as far as Samoa to study at Otago. Ewen, who also plays trumpet and piano, hopes to be the fifth generation at Otago and plans to study history, politics and French.