Ten questions for the Templeton twins

Two of Otago’s most illustrious and hard-working alumni also happen to be twins.

Ian and Hugh Templeton, born in Southland in 1929 and now in their 91st year, have each amassed a lifetime of fascinating experiences, along with some cricket and not a little wisdom. And they’re still going strong. 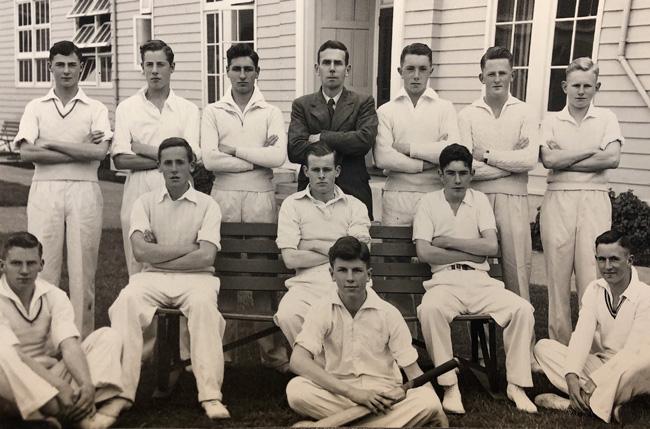 Hugh Templeton (top left) with his brother Ian beside him in the King’s High School cricket team.

Ian (OBE and CNZM) is one of the country’s most eminent journalists, in what he describes as “what history may assess to be the golden age of journalism”. Hugh (QSO AO) was a career diplomat and politician, serving as Minister of Revenue and Customs as well as Trade and Industry in Muldoon’s cabinet and taking a lead role in establishing Closer Economic Relations (CER) with Australia.

Both attended the University of Otago in the late 1940s to early 1950s, staying at Carrington and then flatting, with Ian studying for a BA in English and Economics while working part-time at the Otago Daily Times, and Hugh studying History.

When Hugh was awarded a Rhodes Scholarship to Oxford University, Ian says “it became imperative to find some way of joining him in the UK” and sure enough, through Hugh’s contacts he was offered a year’s experience at the Glasgow Herald.

Back in New Zealand, Ian continued his career in journalism and became the longest-serving member of the New Zealand Press Gallery, retiring finally in 2017 after 60 years. With other senior colleagues, he still writes a daily parliamentary blog.

Hugh says his career has been underpinned by the value of “holding leaders to the truth – and to the principles of the UN Charter New Zealand helped draft – the chief principle being that of cooperation”.

He describes being a twin as “a precious gift and distinction – Ian and I understood each other and still do – we never had to call at cricket”.

While Ian demurs from handing out advice to students today, Hugh entreats them to “think and work globally – and pray a lot, as the UN Charter enjoins ‘for peace and security and social and economic progress’ – as free but fair-minded New Zealanders.”

Each has provided their own story in response to 10 questions, which reveal both their individuality and their deep connection. As Ian says at the end of his story, during the course of their lives “side by side the Templeton twins both gained confidence, Hugh the more imaginative, and Ian prosaic by comparison, but drawing in their different capacities from their university experience to develop careers which, hopefully, gave something back to the country they love.”

For their full stories, each in their own voice, read on:

Q&A with Hugh Templeton
Ian Templeton – giving something back