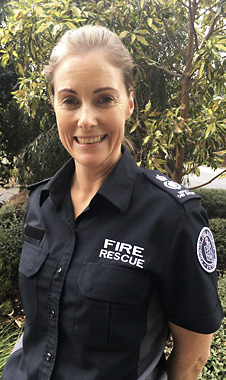 A key feature needed to survive in such an intense and stressful work environment is resilience. Coincidently, Stephanie’s PhD at the University of Otago (2012), was on human resilience. Even more interestingly she says her topic was largely inspired from research on workplace resilience done by the CFA.

For her thesis she researched resilience and culture and a biological principle of how plants thrive. Stephanie looked at people and their attachment to land and how that had changed over generations.

“I took a particular viewpoint on what made people resilient and took an in-depth look at the changing land ownership patterns of Māori.”

Stephanie says resilience was quite a formative topic at this time.

“They (the CFA) were asking what makes people resilient in a crisis and what makes people behave in a way so they should rebound from emergencies. I still use my research in my day-to-day thinking and its applicable to my current role,” she says.

“The situation that we found ourselves in this fire season was unprecedented. The sheer scale and intensity of fire around much of Eastern Australia was exceptional,” she says.

Once a review of the fire season is done Stephanie says there will be some amazing stories to tell, and, “it’s probably worth a thesis in its own right”.

“For me it was being exposed to that human spirit and the courageous things that people undertake when they’re under such pressure. I also must say that the support that we received from New Zealand in terms of physical assistance, but also words of encouragement really lifted our spirits.”

Stephanie says it’s a story of adaption to the environment that we’re now working in and how are we going to live in this environment going forward, with global warming and the likely increased intensity of the bushfire season.

Meanwhile, she remains a proud Kiwi and has fond memories of her time in Dunedin. She had no idea what was right on her doorstep and is glad she chose to do her PhD at Otago.

“I did my PhD at Otago a bit later in life. I was initially looking at the University of Canterbury as that’s where I’d done my earlier study, but when I looked at all the support that Otago offered me as a mature student, it was an easy choice on where best to complete my studies.”

She grew up in South and Central Otago, and studied Forestry and Environmental Science at Canterbury.

Stephanie had two children when she started her PhD and had a third child during her studies, so all the time she was doing her PhD she had a very young family.

Despite the odd difficulty she says she enjoyed her time at Otago.

“I found that my studies offered me the flexibility that working in emergency services certainly didn’t in terms of work rosters, at least at that time.

“During my time studying at Otago there were many doors that were opened to me that I had never anticipated. I was so privileged to spend time and interview and publish the stories of such an incredible bunch of Kiwis. Their stories of resilience will stick with me forever.

“I also made some life-long friends through my studies at Otago. I think that Otago is such a great place to study and the diversity of thought there is incredible.

“I had two amazing supervisors who helped me navigate some very complex thinking and help me to write my thesis, these were Professor Hugh Campbell and Associate Professor Janet Stephenson in the Geography Department,” she says.

She says her time at the University of Otago allowed her to have self-directed study, which meant she could have a really amazing project to work on and to structure her time around her family.

“If I can do it anyone can, so if you have some topic you’d love to investigate in detail go for it,” Stephanie says.

Stephanie says many of the challenges that firefighters face in New Zealand and Australia are the same, but the biggest difference in Australia is in terms of scale, the size of the fire and the intensity. However, there are more resources and tools in your toolbox “over the ditch”.

“It’s easier in so many ways to go from small to big, because all the basics are the same you just need to lift your thinking in terms of scale. I think it would be much more challenging to go from big to small.

“There are 54,000 firefighters in the CFA, and we can draw from the defence force and air support if needed.

“It’s a struggle for all of us with work life balance. The biggest challenge for us in the fire service is you never know when your big workdays are going to be. You know that summer is likely to be the fire season, but apart from that you have to take it as it comes.

“For anyone it’s a matter of finding out how you can be a whole person and working out how to look after yourself,” Stephanie says.