Links unearthed to one of our leading lights 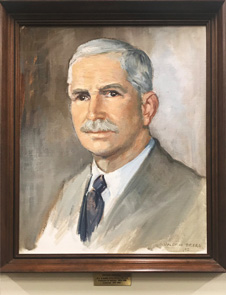 A chance discussion during lockdown led to the discovery of strong family ties to the University. Otago Business School Development Manager Graeme Mullin was Skyping an old friend in the UK, only to discover that his friend’s great-grandfather was one of the founding Geology professors at Otago, Professor Patrick Marshall.

Graeme says, “Stephen Elwood is one of our closest family friends in the UK. We worked together in Abu Dhabi on some projects a few years ago. Our children are the same age and we regularly keep in touch.”

Stephen’s mother mentioned that she thought her grandfather had studied and or worked at Otago and so Graeme went to work researching his friend’s predecessor.

Patrick Marshall was in born in 1869 in England. In 1876 his family emigrated to New Zealand, but his father John Marshall (Stephen’s great-great-grandfather), died in 1879 and the family returned to England. His mother remarried and they returned to New Zealand in 1882. Soon after Patrick attended Wanganui Collegiate, he then studied at Canterbury College and in 1892 he completed an MA at the University of Otago. After working as Head of Science at Auckland Grammar School, he was appointed a lecturer at Otago in 1901 and became a full professor in 1908. 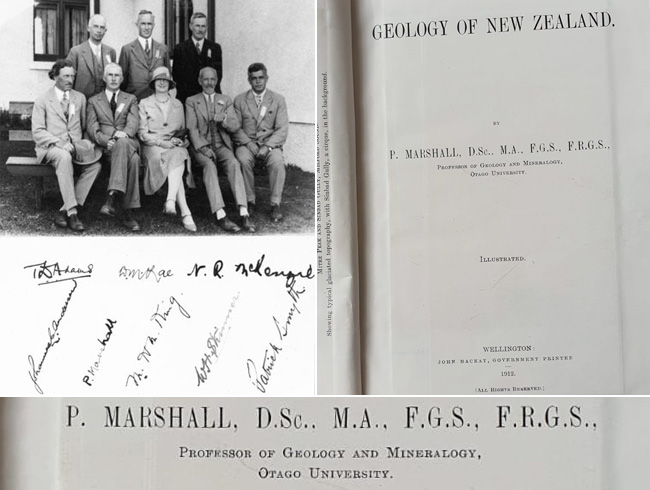 Patrick Marshall (front row, second from left) at a New Zealand Teachers' Summer School in New Plymouth 1930 and a copy of his book Geology of New Zealand, published in 1912

Professor Marshall was extremely busy during his time at Otago. He took part in a 1907 expedition to the sub-Antarctic Islands. He wrote widely-used textbooks on the geology and geography of New Zealand and his studies of the Pacific basin led him to identify what is now known as the boundary between two major tectonic plates.

At the start of the First World War he volunteered to serve his country, but was not accepted. He left Otago in 1916 and went on to set up the National Teaching Council and the same year he became Headmaster at his former high school Wanganui Collegiate, which he left in 1922. He worked briefly at the British Museum and from 1924 until his retirement in 1940 he was based at the Public Works Department in Wellington. 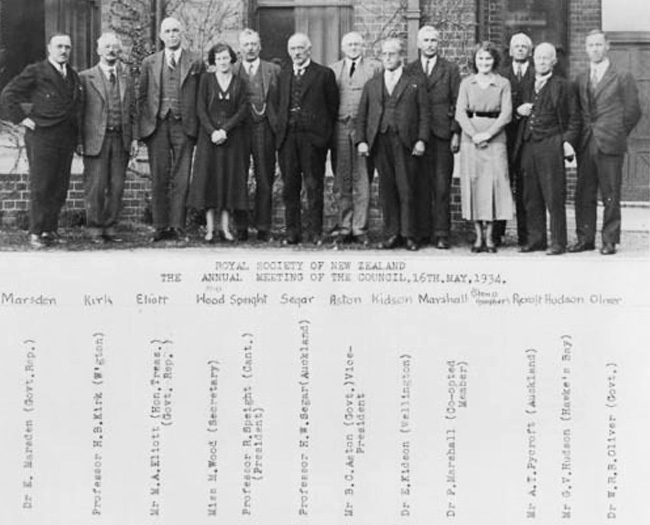 Among his many achievements he was one of the original fellows of the New Zealand Institute (later the Royal Society of New Zealand). He sat on numerous government committees including the one that set up the Department of Scientific and Industrial Research (DSIR) in 1926. His pioneering work in the fields of coastal erosion and volcanology were world-leading at the time. 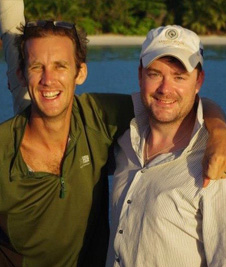 His great-grandson Stephen went on to study Chemical Engineering at Cambridge University (the same university that is great-great grandfather John Marshall graduated from and played cricket for in the 1850s). He followed this with studies in Computer Science at the University of Sheffield.

Like his great-grandfather, Stephen is a qualified teacher, and he hopes one day to visit the New Zealand schools that his distinguished forebear taught at.