COVID-19 did its best to disrupt Andrew Coshan’s plans, and while it’s been a bit of a rollercoaster year for the actor and musical theatre performer, he’s managed to keep his career firmly on track – on both sides of the Tasman. 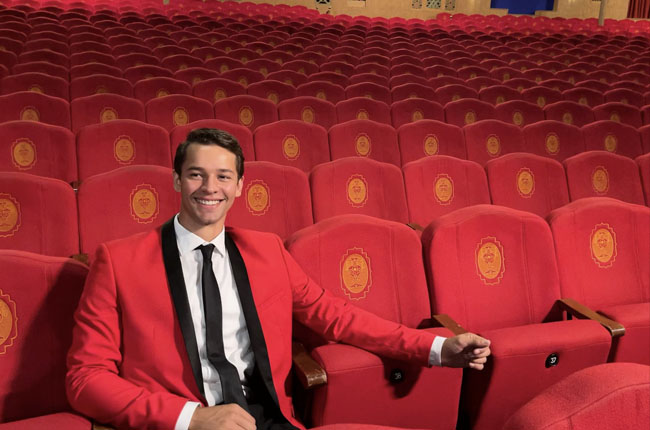 With two of his shows postponed and having had enough of lockdown in Melbourne, Andrew, an Otago Performing Arts graduate, came back home to Auckland in November. After two weeks in MIQ and then spending time with his family, he set off on a summer road trip around the South Island with his brother Robbie Coshan.

“I’ve been in Australia for the last five years, and my brother’s been in London for the last two. We were coming back at a similar time and he said ‘what are you doing in January?’ I had nothing planned . . .”

After stops in New Plymouth, Kaikoura, Queenstown, Te Anau and the Catlins, they made it to Dunedin to stay with old Otago Uni football friends in late January. We caught up with Andrew on campus when he called in to say hi to his former lecturers.

Andrew first came to Otago in 2012, to study Performing Arts and Theatre Studies as a double major.

“They didn’t offer musical theatre so in the performing arts degree I took papers from the theatre school, the music school and the dance school. Only about three of us were doing that – we formed our own version of a musical theatre course.

“It was all very separate – theatre not music related, music not theatre related. We built the skills separately. I definitely learned to act here. I think the acting course is very good at Otago.”

“I was a bit late coming to the theatre party. I didn’t do drama or music at high school. I danced a bit and did the school musical, and you fall in love with that if you’re a certain type of person.”

He also learned to sing. “I was a bit late coming to the theatre party. I didn’t do drama or music at high school. I danced a bit and did the school musical, and you fall in love with that if you’re a certain type of person.

“I was doing calculus and biology and all these things that I thought I needed to get a real job, because I thought financial security was important . . . It was a very steep learning curve to go into the music school and not be able to sing. In hindsight it seems absolutely ridiculous, I can’t believe that that’s what I did.”

To make up ground, Andrew took extra lessons from a singing instructor outside the University and also started doing musicals with amateur companies Music Theatre Dunedin and Taieri Musical.

“It was like I got to go to class and learn to act and sing and learn music, and then it was an extra-curricular thing that let me put it all together.”

A high point in his time at Otago was a part in the play Punk Rock, a Fortune Theatre/University of Otago collaboration. Half the cast was professional actors and half students. “Technically it was my first professional show. It got very good reviews and won multiple awards. Naturally a production like that taught me a lot.”

After graduating from Otago, he headed straight for the Western Australian Academy of Performing Arts (WAAPA) in Perth and spent three years studying the BA in Musical Theatre.

“It’s intensive. All contact hours are scheduled. I think the way the Otago theatre course is structured you get a lot more freedom, but there’s a lot more extra opportunity [at Otago] and there’s more of a field to reap rewards from in a way. Whereas WAAPA is more strictly structured so everyone does the same thing. It’s interesting comparing the two very different schemes. I’m still not sure which one’s better. But I got to do both which helped me in a breadth of ways.”

Since graduating from WAAPA in 2018, Andrew’s diary has been fully booked. In his first year he performed in five professional stage shows in Melbourne and had two lined up for 2020. 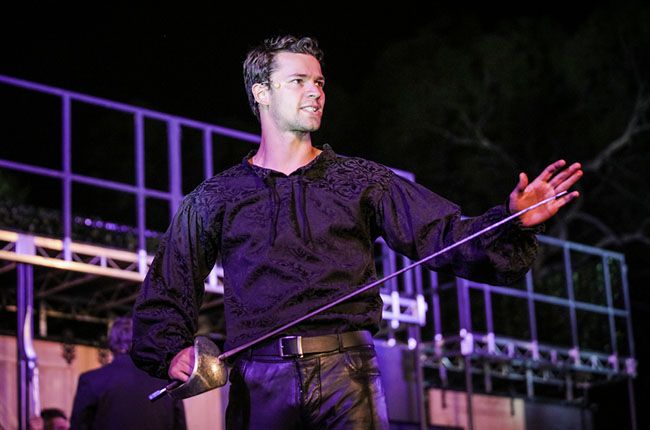 Luckily, his shows Merrily We Roll Along with the Hayes Theatre Company in Sydney and As You Like It with the Melbourne Theatre Company, have both been postponed to this year, rather than cancelled.

“I have friends who’d landed leads in big shows and then those shows were flat cancelled, so there’s a healthy dose of perspective on how lucky I am these were only postponed. I knew a couple of people in A Chorus Line in Sydney and it was opening night when the show got pulled.”

But while his year was upended by COVID, there has been a silver lining to coming back to NZ. Originally, he planned to stay 90 days, long enough not to have to pay for MIQ. But while he was in quarantine a friend contacted him to ask if he was auditioning for the professional Jersey Boys production, playing in Auckland and Wellington from April to June.

He messaged them and found they were finishing the auditions on the Saturday he got out of quarantine, but luckily they arranged to see him on the Sunday morning. He auditioned, was called back for Jersey Boy Nick Massi, and ended up getting the role.

He says practising in MIQ was interesting. “In one sense you’ve got all the time you need, but I was thinking ‘is my neighbour going to complain?’ At one point I was singing and someone knocked on my door. I was convinced that someone was going to ask me to stop yelling, but it was just someone coming to take my temperature. They absolutely would have heard me in full belt as they knocked!”

Rehearsals for Jersey Boys started at the beginning of March, and opening night is 17 April in Auckland. He leaves the production in late May to return to Sydney for Merrily We Roll Along, which runs until August. Then it’s As You Like It, which will keep him busy from September to the end of the year.

After that, he doesn’t have any definite plans. “Success makes success, so the more shows you do, the more people see you, the more experience you have, the more you’ve got on your CV, the more directors want to see you . . . things roll on from one thing to the other.

“So the plan pre-COVID was to do these two shows in 2020 and then see what turns up. If I had a few months off I’d maybe go to London and try their industry and see how I go. I guess that still is the plan, I’m just kind of seeing what success comes from this success.”

He’s also keen to do more TV and film, and in the middle of COVID restrictions last year was cast in six episodes of Neighbours, which was his first real experience of a screen set.

“It’s quite funny when you know something is filmed in COVID time. You see a couple walk up to each other and not touch. One episode I was in that happened. It was a really hug and kiss moment, but they had to keep 6 feet away from each other.”

He’s also recently auditioned for an Amazon series and a movie which are filming in NZ. “A lot of movies are filming in NZ at the moment, and from a production perspective it’s convenient to cast a New Zealander.”

“It was my first full Shakespeare and you kind of catch the bug for it I find. I finished and thought ‘I need to do all of them!’”

The last show he did before COVID shut down theatres was Hamlet with the Australian Shakespeare Company in Melbourne, playing the role of Laertes.

“It was my first full Shakespeare and you kind of catch the bug for it I find. I finished and thought ‘I need to do all of them!’ I want to play Romeo, Hamlet, The Scottish guy etc. etc., all those amazing roles. But we’ll see.”

As it is, despite juggling all the restrictions of the pandemic and trans-Tasman travel, he’s already making progress on his wish-list of roles, having landed the role of Orlando in As You Like It.

For Andrew, COVID or not, it’s looking like the show will go on.