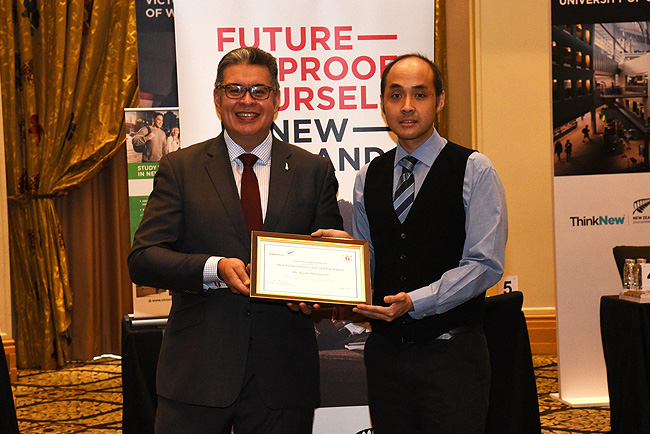 Otago graduate and recent New Zealand Embassy in Thailand Alumni Hall of Fame inductee Ayudh Nakaprasit credits his time at the University as key to his academic and business success.

Ayudh was inducted into the Hall of Fame in Bangkok at the end of August, by the NZ Ambassador to Thailand H E Taha Macpherson. The award is only handed out to six New Zealand alumni each year.

“Otago made me everything I am,” says Ayudh, who attended Cashmere High School in Christchurch from 1993-1996 and graduated with a Bachelor of Tourism from Otago in 2002.

He went on to do a Master of Aviation Management degree at Griffith University in Brisbane and then his PhD at Cranfield University in England.

Ayudh is now the Managing Director of Eastiny Group of Hotels and Resorts, in Pattaya, Thailand.

“I am extremely thankful to the foundation that I had at the University of Otago many years prior. The academic members at Otago Business School had very high expectations of all their students,” he says. “Without their love and dedication in helping me to be the best version of myself, I would never be the person that I am today.”

In his citation, Ayudh says the key advantage of the Business School is that the lecturers have hands-on experience in business, thereby linking the academic to the practical world.

Currently, he works at a strategic level focussing on bringing in revenue for his company.

“I confidently apply the knowledge I learned at the University to my job. The programme prepared me to be well-rounded for the jobs in the business arena.”

Each year six alumni from universities, schools and independent training programmes are chosen to receive the award. The criteria include a significant study period in New Zealand and at least a vice-president-level position in a big or well-known company. If the alumna is the owner of the business, the revenue should be a minimum of THB 50 million (NZ$2,336,599).

“The University of Otago has established a wonderful place in my heart. I was only there for three years. I never knew that it would turn out to be the best decision ever.”