Claire Clements is following her dreams 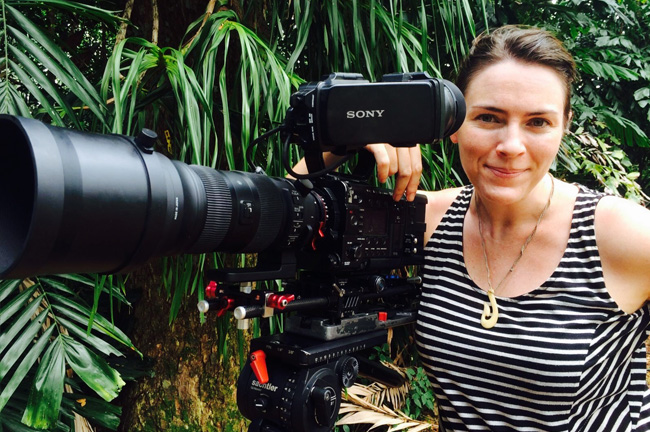 Watching a film crew in China, gave Claire Clements the idea for her current career as a wildlife documentary film-maker.

After studying Zoology in Australia, Claire spent quite a few years travelling, including working in China for Australian Aid. In China she got up close with the Giant Pandas, which were featured in the documentary that gave her the idea for her current career.

Keen to pursue wildlife documentary making as a job, she searched the world for study options, and the University of Otago Master of Science Communication (MSciComm) course popped up. This was in 2008 and there were only two courses available in the world at this time, she says.

Claire completed the two-year master’s degree at Otago and then got an internship at NHNZ in Dunedin, where she worked for a few years. While she was there, she worked on a TV show called “Zoo Moo”. NHNZ is linked to another company in Singapore, and she moved there with the show.

“We (Claire and fellow MSciComm graduate Andrew Scott), started doing the “Wild City” series in Singapore in 2013, and we thought that there were only two episodes that we could work on, so we thought wouldn’t it be great to have someone like Sir David Attenborough voicing the stories, and then we thought why don’t we just ask him? We got in touch with his agent, who agreed on the condition that Sir David was happy with the final product.

“So the whole time you’re filming you don’t know if he’s actually going to do it. But we were fortunate that he was happy with the filming and he did narrate it. 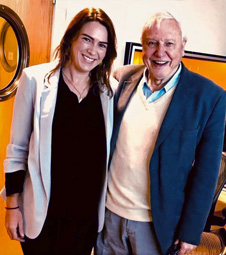 “When you become a natural history writer you think, ‘I would love to work with Sir David Attenborough’, and then when it happens it’s amazing!”

Last year in Singapore Claire was working on the “Forest Life” TV series and wanted to film a species of monkey that had never been filmed before. There are only about 60 of the monkeys left in the wild in Singapore and another 250 or so in Malaysia.

“I knew the researcher was studying this monkey. They are very shy and live very high in the trees. She had built up trust with a group of about nine monkeys. For the first few days I was out there getting absolutely nothing, which is quite demoralising, but then you get 10 minutes of footage and it’s all worthwhile.

“I did the script for this with Sir David Attenborough too. It’s really nice to write scripts for him, because you know his voice and you can write for the way he speaks, and it’s incredible to direct him. He was 93 and super sharp at the time.”

In terms of her training she says her greatest inspiration from her course was her mentor, retired MSciComm Director of Filmmaking Ross Johnston.

“He’s incredible; he taught me everything. When I started I had never edited or filmed before. In the first few months I was the one who really struggled, for example I went out for an interview without a microphone… I just wasn’t good at that stuff.

“Ross said you can learn all the technical aspects of the role, but what you do have is that you can tell stories, and that’s a lot harder to learn. You can have amazing footage, but it’s all about the story telling.

“I also love Robert Brown (now Professional Practice Fellow). He was our camera teacher, and I remember his strict techniques. If you put your tripod and camera down and walked away from it, he would take it.

“He’d say, if you left that alone in the wild what do you think would happen to it?

“One time we were out shooting Highland Cattle and pretending they were elephants. He told us not to bring any food, and I forgot that I had an apple in my bag. There were pigs there as well. I was lying there filming on the ground and this pig came along and stood over me and got the apple out of my backpack, and Robert said ‘you can’t move, you’re just going to have to let it happen now, this is what could have happened in the wild’.

“I always have Robert’s voice in my ear when I’m setting up, he taught us great techniques for operating cameras.” 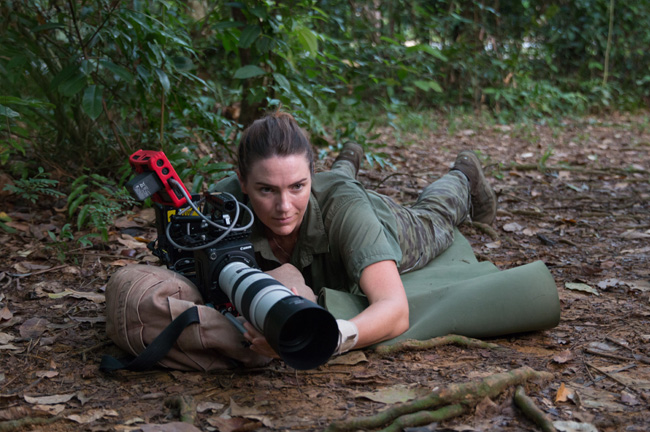 Claire enjoys the busy life of a wildlife documentary-maker, but she has to get used to a lot of travel.

“This year’s been quite crazy. I’ve been working out of Bristol in the UK for a natural history company and was shooting in Arizona for 12 weeks producing a short film about wildlife in the desert.”

Claire hopes to head back to Singapore for her next project. Despite being a large city, she says within 15 minutes she can be film-making in the jungle.

“I try to come back to Dunedin every summer, as my projects often finish in November. It is quite a tough lifestyle, sometimes you finish a film and now you’re unemployed. It’s the freelance lifestyle,” she says.