A function to recognise the contribution of significant donors to the University was held at the staff club earlier this month.

Known as the Court of Benefactors, members of the group came from around New Zealand and were welcomed and thanked by the Chancellor Dr Royden Somerville QC and the Vice-Chancellor Professor Harlene Hayne for their support of the University.

Dr Somerville especially welcomed new members to the Court of Benefactors, Graeme and Robyn Hart, Dr Stanley and Catherine Paris, Noel Carroll and the Presbyterian Synod of Otago and Southland.

The function was also an opportunity for benefactors to join with senior staff in celebrating the University’s 150th anniversary. Videos of a special alumni “welcome back to Dunedin” by the Mayor, David Cull, and the celebrations held over Queen’s Birthday weekend were played. 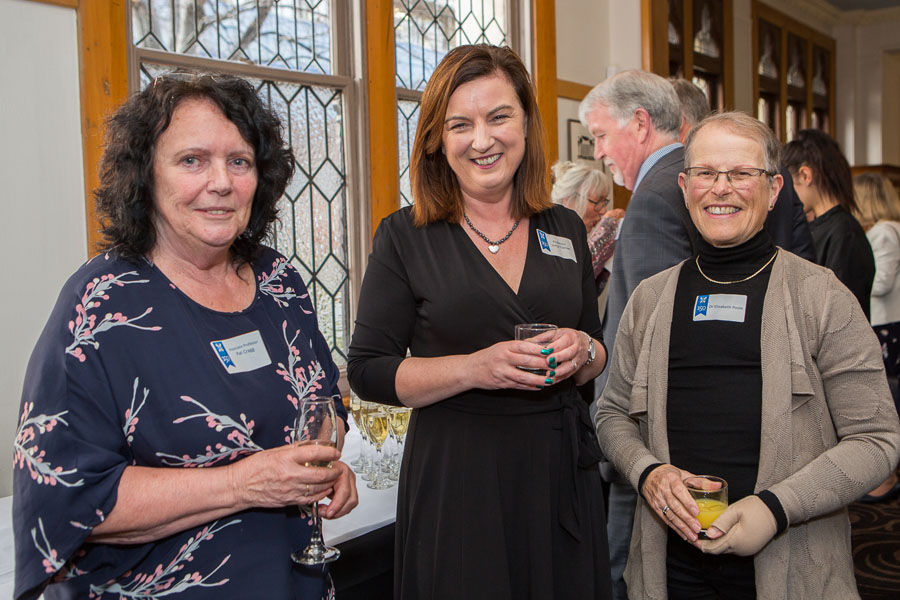 One of the speakers during the evening was a new Leading Thinkers Professorial Chair, the Eamon Cleary Chair in Irish Studies, Professor Sonja Tiernan.

Professor Tiernan took up the Eamon Cleary Chair in June and gave a wide-ranging speech taking in topics as diverse as Brexit, reclaiming Halloween and the All Blacks.

She described Irish Studies as an interdisciplinary study of the island of Ireland through its history, society and culture and said it was an attractive path of study for scholars of all nationalities across the globe.

“The reason for such interest in Irish Studies is because this is a cross-discipline approach to better understand issues which are now of prime global importance such as colonisation, famine, rebellion, civil war, nationalism, unionism, economic booms and recession, waves of emigration, sectarianism, civil rights, gender equality and a country capable of rapid change.

“Most recently academics and political commentators have noted the obvious parallels between the ongoing refugee crisis and the Great Irish Famine.”

The first resident Irish embassy opened in New Zealand just months before Professor Tiernan arrived and she has been collaborating with Ambassador Peter Ryan on a number of projects.

This collaboration has led to the start of a national research project funded by the Irish government’s Department of Foreign Affairs and Trade to map Irish communities and people of Irish heritage in New Zealand.

Professor Tiernan is the lead investigator of the project and says that international migration figures for June of this year show an increase of nearly 14 per cent in Irish migrant arrivals to New Zealand in 2019. While there is no concrete evidence of how many people here claim Irish heritage, figures estimate this may be as high as 600,000.

Professor Tiernan says Ireland and New Zealand have many things in common, and cooperate closely on foreign policy issues such as climate change, disarmament and human rights.

“And lest we forget during the Rugby World Cup, that Ireland and the All Blacks regularly alternate from the top position in the world rankings. Ignoring our defeat to Japan at the weekend, Ireland has a highly successful team with the help of two New Zealanders – our head coach Joe Schmidt and midfielder Bundee Aki. The first captain of the ‘Originals’ All Black team was Donegal man David Gallaher.”

A series of Irish film nights has been running since the beginning of August with a tremendous attendance. In October, Cherry Smith, a poet from Northern Ireland, will conduct a poetry workshop on campus, give a public lecture and perform her new work Famished.

“The performance is part of my plan to reclaim Halloween, which is now perceived by many people to be an American event.

“In fact Halloween, or All Hallows Eve, originates from a Celtic festival called Samhain.”