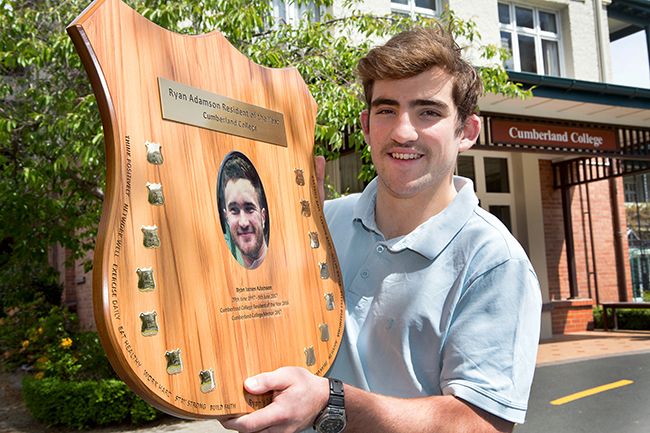 Inaugural Ryan Adamson Cumberland College Resident of the Year Gus McPherson with the award shield outside the College earlier this month.

It’s fitting that the inaugural recipient of an award renamed to commemorate former Cumberland College resident Ryan Adamson – a young person who will be remembered for his genuine desire to help others – should go to a similarly community-minded Otago student.

As 2017 Ryan Adamson Resident of the Year recipient Gus McPherson chatted about study options and his love of playing Otago Under-18s rugby outside Cumberland last week he wished fellow residents passing by ‘good luck’ with their exams; a small gesture, but one which may help their pre-exam nerves.

The first year Geography and Marketing student was attracted to Otago from Wellington by the prospect of “gaining some independence” and the inclusive nature of the Otago student lifestyle.

He credits the atmosphere at Cumberland with helping him become “a bit more outgoing”, and has enjoyed participating in a range of social activities and “giving back where possible”. Gus has also applied to be a student mentor at Cumberland next year to assist residents with their transition from home and secondary school to student and college life.

“I remember at the start of this year when I first arrived at Cumberland, thinking that the welcome Ryan and the other mentors offered – even if it was just as a friendly face there to greet us – was really reassuring and helped me feel at home. I’d like to give it a crack for sure.”

Cumberland Head of College Nick Bates says the Resident of the Year award has been presented since 2008, but was renamed this year in honour of Ryan – the 2016 recipient – who passed away due to natural causes at his Dunedin flat in June, aged 19.

"Ryan was a humble, well-respected and genuinely giving person who would always drop what he was doing to help. We were fortunate that he stayed involved with college life in his second year and I recently had someone say they wouldn’t have passed statistics without his help. Aside from sharing an intense interest in sport, Gus is a similar type of guy in that he’s always willing to give others a hand."

Nick says the words inscribed on the Resident of the Year shield are taken from Ryan’s laptop screensaver and include values the Physical Education second-year always converted into action.

“They are common goals for many, and include things like ‘think positively, work hard, volunteer freely’, but they make a huge difference to others when someone has the energy and right attitude to put them into practice.”

Like former recipients, Gus “exhibits qualities of what we aspire to at Cumberland College, 'community with heart and soul’,” Nick says.

The University of Otago would like to acknowledge the Adamson family’s generosity in establishing a commemorative fund which will ensure future Ryan Adamson Resident of the Year Cumberland College recipients also receive a $500 prize with the award.

(Below) Gus and Cumberland Head of College Nick Bates. (Photos by Sharron Bennett) 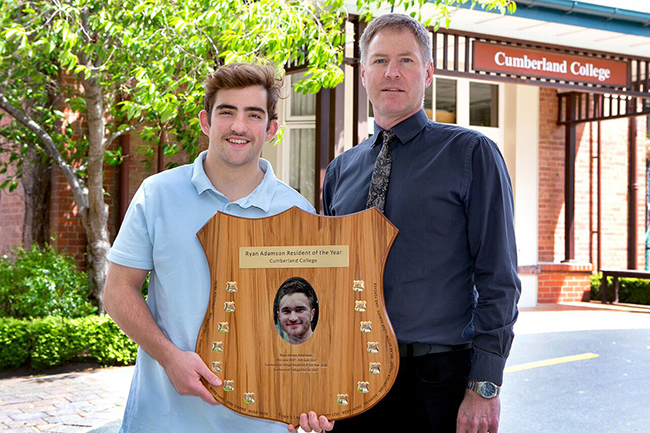