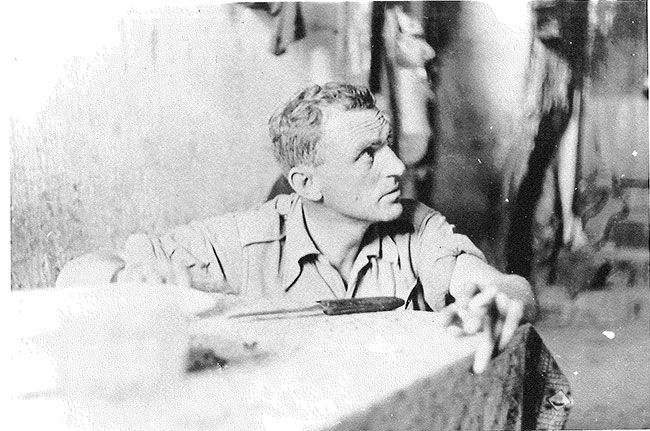 Exploring the odyssey of an internationally renowned surgeon – who was little known in the country of his birth – has led a fellow Otago medical alumnus on his own journey of discovery.

On 23 March a plaque recognising the achievements of 1931 Otago Medical School graduate Dr Douglas Jolly will be unveiled at a ceremony in Cromwell’s historic township area.

Otago medical alumnus Dr Patrick Medlicott says he hopes the plaque will raise awareness of the legacy of a doctor whose experiences in two major twentieth-century conflicts led him to write “the bible” of war surgery.

“Dr Jolly is one of the best-known New Zealand surgeons overseas but has received little recognition in this country and, until recently, was unknown in his own town of birth.”

Patrick’s interest in Dr Jolly’s exploits was first piqued when he attended a College of Surgeons meeting in Queenstown. He was asked to contribute to the “Surgical Pioneers” historical section of the lecture series.

He had read Desert Surgeons by Michael Shackleton and was a family friend of the late Stanley Wilson of Dunedin, who was a surgeon in North Africa’s Western Desert during World War 2.

“During the war Stanley carried a copy of Field Surgery in Total War by Douglas Waddell Jolly from Cromwell, who had been a surgeon on the Republican side in the Spanish Civil war and then worked for Britain’s Royal Army Medical Corps in Tobruk and Italy until 1945.

“I went to the Cromwell museum but they had not heard of Dr Jolly.”

Help from numerous people, including Mark Derby (a historian who wrote Kiwi Companeros, a book on New Zealanders in the Spanish Civil War), and hours on the internet yielded a 2015 paper and a 2016 monograph on Dr Jolly.

In 2016 Patrick and his wife Judy went to Spain and followed in Dr Jolly’s footsteps, spending time in areas where he worked, including the cave hospital in which he performed operations during the Ebro offensive in 1938.

“Dr Jolly is so well-known in military surgery circles around the world and his book was a classic, being used by New Zealand teams, the Americans and even possibly the Germans during WW2 and after.

“Mark Derby, myself and others felt that a permanent memorial to his achievements should be placed on the former Seed and Grain Store in Cromwell, which was owned by Dr Jolly’s grandfather.”

The unveiling ceremony will be attended by the Central Otago District Council Mayor and Spanish government representatives.

ALUMNI FACT: Douglas Waddell Jolly (1904-1983), grew up in Cromwell and graduated from the Otago Medical School in 1931. He then worked in New Zealand before travelling to the UK for surgical training in the mid-1930s. In 1936 he went to Spain to help the Republican side as part of the International Brigades.
Dr Medlicott says that while in Spain Dr Jolly performed some 5,000 operations “just behind the front line”, became a decorated Major and received the Ebro Medal.

In 1940 he published Field Surgery in Total War.

He then joined the Royal Army Medical Corps and worked until 1945 in the Western Desert and Italy. He was awarded the OBE for his service and retired with the rank of Lieutenant-Colonel. Despite his experience he never finished formal surgical training and became an Artificial Limb Specialist. In 1951 he joined the staff of Queen Mary’s Hospital at Roehampton, near London, an internationally renowned orthopaedic centre, and eventually became its chief medical officer. Dr Jolly died after a long illness in 1983.

In a 2014 article Mark Derby said US medical historian David Adams had described Dr Jolly as “one of the most notable war surgeons of the 20th century”, while another US authority described Jolly’s methods as contributing “more to the saving of lives of patients with abdominal wounds than any other single factor.”

In Korea and Vietnam the mobile hospitals used by the US Army and its allies were based directly on the mobile surgical units that Jolly described in his book.