One tiny piece of distraction 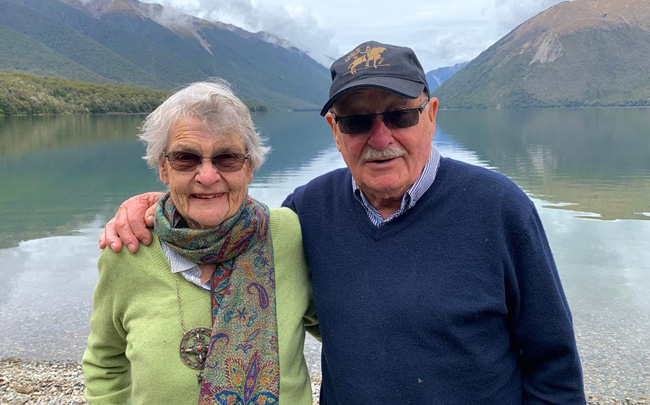 When Gavin Kerr’s wife Elizabeth (Liz) died shortly before lockdown in March this year, he wrote a poem for the small family group gathered for her farewell. He wrote about what he hoped “might have been her thoughts at leaving us”.

Elizabeth, aged 85, had succumbed to “the double whammy” of dementia and congestive heart failure.

As it turned out, his farewell poem was the beginning of something much bigger. It became the prompt to write a poem a day during lockdown, reflecting on life under Alert Level 4 and “whatever took my mind at the time,” says Gavin.

“It gave me a focus. I had something to achieve each day, and I think that was quite a significant help in the grieving process.”

Gradually, with a little extra input from some friends, the poem a day turned into a book – Under Lockdown – now published and reprinted many times over. For each book sold, Gavin has donated $5 to the Marlborough Branch of Alzheimer’s NZ, in gratitude for their support and help during Elizabeth’s journey through dementia. So far he has raised $1250.

“Alzheimer’s is a cruel disease at the best of times, but more so and heart-breaking for someone of her intellectual ability and love of life,” says Gavin. 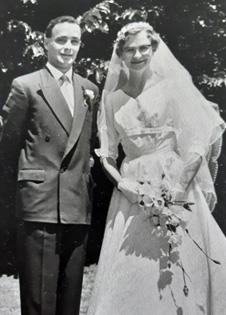 Elizabeth and Gavin Kerr on their wedding day

The couple married in 1959 and went on to have three children, Sarah, Barbara and James.

Over the following decades, Gavin spent most of his career working in education in New Zealand, the UK, Fiji and Pakistan. He started teaching (English and History) in 1959 and has had a variety of roles including Head of History at Waimea College in Nelson, and Deputy Principal and later Principal of Horowhenua College in Levin.

When he retired in 1994, he went with Elizabeth to Pakistan where he worked at a network of English Medium Schools for four years.

Gavin has also held governance roles in the field of overseas development assistance and the Justice sector, including serving for six years as a member of the Human Rights Tribunal and New Zealand Council Chair and President of Volunteer Service Abroad (VSA). He was made a Companion of the Queen’s Service Order in 2007.

While Gavin was finishing his degree, Elizabeth began teaching French at Southland Girls’ High School. After they married they moved to Hamilton and she taught at Hamilton Girls’, and then in the UK when they were on their OE. She also taught in Fiji and Levin, and when they went to Pakistan she was the leader of the A level students at the campus where they worked and developed the English curriculum for the whole network.

Gavin says she was an avid gardener, and her main intellectual interest after retirement was her involvement with Marlborough branch of U3A (University of the Third Age). She ran film groups and seminars on several different subjects, including teaching French.

“She was a leading light and became a life member of Marlborough U3A.”

Gavin says he has always had an interest in writing verse, mostly less-than-serious, as responses to friends’ letters and emails or as a reflection on experiences such as group travel or special gatherings.

He says he tried to vary the style and content of the poems for the book. “I’d never know at the beginning of the day what I was going to write about. Many thoughts would also come to me in the middle of the night.” 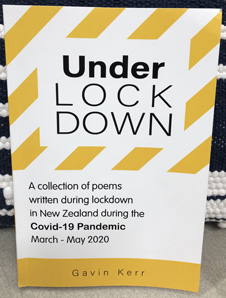 Gavin’s book of poetry Under Lockdown: A collection of poems written during lockdown in New Zealand during the COVID-19 pandemic March-May 2020.

The poems include reflections on experiences he had when taking permitted walks during the lockdown, or his response to reading about world events.

They range from the dedication Elizabeth at the beginning, to Washday Blues, Advice to Errant Health Ministers, One Month Today (after Elizabeth had died), and towards the end of lockdown in late April Bugger the Housework: Gone Gardening and Late Afternoon on the Wither Hills.

“They are just one tiny piece in the mosaic of distractions occasioned across the country at that time,” says Gavin.

When he sent the book through to Otago’s alumni office, his accompanying letter said he “just wanted to close a circle for her [Elizabeth] by sending this to her University for which she has (as I do) an abiding fondness and gratitude.”

While he has joined a local poetry group and hopes to keep writing in the future, Gavin says his focus now is to get back to his main hobby of watercolour painting.

If you would like a copy of Under Lockdown, you can email Gavin on gekerr@slingshot.co.nz.