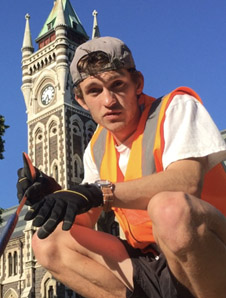 20Twenties Young Alumni Award winner in recognition of scientific curiosity for the betterment of the community. BSc Major Geology 2019

All I’ve wanted to do in New Zealand is make a contribution. This country has given me so many gifts and opportunities, and I decided that the best way that I could give back was through science. That’s my responsibility, as a guest [from the USA]. So I was quite surprised to be awarded anything. It’s a bit daunting to be listed alongside so many bright young minds, and I’m humbled by reading what everyone else has done for their community. I’m delighted – and a bit amused – that my investigation of dirt and water is being celebrated at this level.

Well, it’s been quite the ride. I had planned on a short trip to Dunedin to finish research, so I came to New Zealand with only three weeks of supplies and no housing. That was in March. I saw what was going on back home in Washington DC, said “screw that”, and called my folks to say “sorry, but I’m not coming home”.

I hunkered down, found whatever odd jobs I could, and made it work. I worked as a writer for the Sustainable Ocean Alliance and Critic magazine; and as a tutor for kids back in the US. I worked at the New Zealand International Science Festival, and now that I’ve finally found my footing, I’ve just committed to further study with Otago’s Geology Department. I’ll be looking at Central Otago faults and have my eyes set on the Alpine Fault for my future.

It’s a cliche, but I quite literally wouldn’t be here if it weren’t for the support of those around me. I give massive thanks to innumerable Kiwis and at least two Americans. 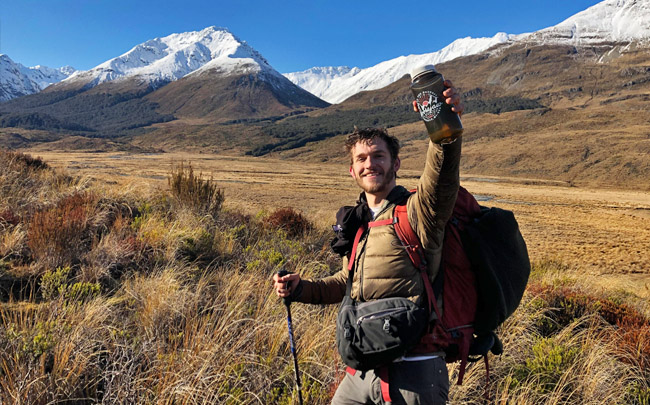 Fox in the Mavora Valley.

I think compassionate curiosity is the healthiest thing we can inspire in the next generation, be it through art, policy or science, and I’m always happy to engage in spreading or applying that curiosity. Curiosity is free, daydreaming is free. Sharing what you’ve learned is free.

I think it’s our job as social animals to share what we have learned with each other, and that’s why science has always been so important to me. It’s the best way that I can be a beneficial member of society, and it’s the best way for me to support the community that has supported me. I want to spend my life working in areas where I can inspire other people to find their niche, too.

What were the highlights of your time at Otago, and has it helped or influenced you in your career and in following your interests?

Pies were a delight to discover – we don’t have those in the States. But I suppose they haven’t influenced my career. I’d say instead that I’ve been most heavily influenced by Otago’s attitude towards failure. Recently, I wrote the most error-ridden article of my career. Before I sent it to be published, I submitted it for revision, and I was promptly and politely ripped into by Otago’s resident expert on the subject.

But that same professor was totally willing to be my supervisor next year. And I’ll be studying the same material that I screwed up so badly the first time, so it’s nice to know that my department has faith in my ability to improve. I can’t imagine a healthy society in which people are only given one chance to solve a problem. Otago has reinforced my belief that the best results are built on a massive pile of errors.