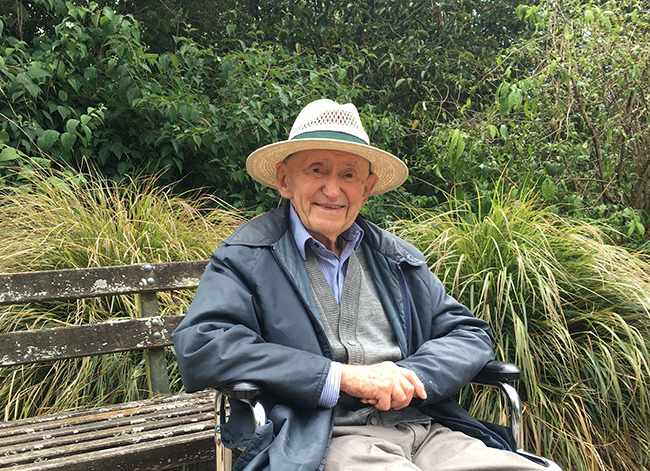 The Oxford English Dictionary has published a blog recognising retired Otago Professor Alan Horsman’s 99th birthday, and his contribution to the Dictionary as editor in the late-1950s.

Emeritus Professor Horsman was briefly editor of the Oxford English Dictionary from late-1956 until he left Oxford to accept a Professorial role at Otago in July 1957. He was the inaugural Donald Collie Professor of English at the University of Otago from then until his retirement in 1984.

During his career he published widely on Victorian literature, as well as renaissance drama.

He now lives at the Yvette Williams Retirement Village, Dunedin, and celebrated his 99th birthday on 24 October.

Mr Gilliver was writing The Making of the Oxford English Dictionary (published in 2016) and wanted to fill in a gap in his history.

“[In 2011], during my research into the history of the Dictionary, I learned that Alan was still alive. I contacted him – aware that by now he would be in his nineties – and tentatively asked whether he would be able to help me by giving me his reminiscences of his brief tenure as Editor. He turned out to be still very active: in his detailed email response to my first batch of questions, he apologized for answering in instalments because he was busy preparing a series of lectures!

“Alan’s reminiscences helped me enormously in writing about the short period of his Editorship for my history of the OED,” he says.

Mr Gilliver wrote an article to honour Prof Horsman’s birthday and celebrate his contribution to the OED, which appeared on the ‘Oxford Words’ blog this week.

“It is inspiring for all the staff of the Department of English and Linguistics to know that our scholarship continues to be appreciated for many decades, and to have an opportunity to acknowledge Professor Horsman's achievements and influence. The Department enjoys a rich academic heritage that we both celebrate and aspire to live up to as we approach the University's sesquicentennial.”

During his time at Otago Professor Horsman also served with distinction as Dean of the Faculty of Arts, Vice-Chairman of the Senate, and editor of the Otago University Press.

While researching a volume on the Victorian novel for the Oxford History of English Literature (published in 1990), Professor Horsman estimated he had read three million words for every nine pages of copy written. He also held the position of Public Orator for Otago for 15 years; in an interview at the time of his retirement he described the position as "very pleasant", because it involved "praising people about whom there's a lot to be said."

In addition to his extensive corpus of writing, Professor Horsman’s legacy at Otago is also remembered via the Alan Horsman Prize, which was established in 2009 after the University received an anonymous gift.

The donor expressed the wish that an annual prize be named in Professor Horsman's honour, and it is awarded to the student with the highest mark in English paper ENGL121.*

(*The exception to this process is when the top-placed student has been awarded the Gilray Prize for aggregate top marks in 100-level English, in which case the Horsman Prize is awarded to the student with the second highest mark in ENGL121.)