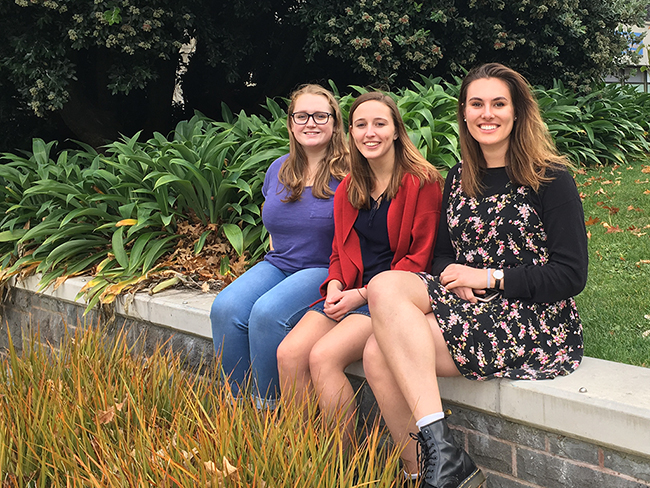 Miriam Hunt, Caitlin Elborough and Caitlin Harris are the inaugural recipients of the Joan Mary Anderson Award in Plant Sciences.

This new award is funded by a gift to the Department of Biochemistry from the estate of the late Professor Jan Anderson, and goes to "the student(s) with a strong interest in plant biochemistry, and who show(s) greatest promise in contributing to plant science".

Professor Anderson was a plant biochemist who studied the molecular basis of photosynthesis, and was the first New Zealand woman to be admitted as a Fellow of the Royal Society of London.

Caitlin Elborough was born in England and moved to Auckland at a very young age when her father started research into Ryegrass molecular genetics. Despite her parents' warnings about a life in science, her interest in biology and chemistry led to degrees in genetics and biochemistry. Summer studentships at Landcare Research honed her lab skills, particularly insect dissections, but a very enjoyable summer studentship at Plant and Food Research helped her decide that she wants to work with plants. She plans to finish her Honours degree in the Macknight lab before gaining a Masters in Commercialisation and Entrepreneurship to lay the foundation for a career in crop genetics. 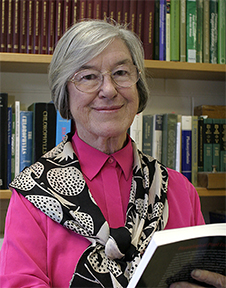 Miriam grew up near the Waitakere Ranges in Auckland, so spent a lot of time outdoors and around people who were interested in nature and conservation. She says she has always loved plants, but it wasn't until her student exchange in Denmark that she realised how much she values New Zealand's nature, and how important plant biotechnology is for creating more sustainable ways to live. Miriam enjoys lab work, and would like to continue in plant or microbial biotechnology research in the future.

Also from Auckland, Caitlin Harris had many interests at high school, including biology, geography and physical education. It wasn't until her last year of school and a plant module in biology that her enthusiasm for plant biology in particular blossomed. This interest deepened during her undergraduate study, which led her to include botany and plant biotechnology papers in her BSc. Her future plans are undecided as yet, although she says she is potentially interested in working in the agriculture industry.