Interacting with people from 35 different indigenous communities was the highlight of Otago graduate Jacob Ashdown’s participation at the United Nations Indigenous Fellowship programme in Geneva in June and July this year.

Jacob was one of 35 fellows chosen from more than 1000 applicants world-wide, and was the seventh Māori fellow to take part in the five-week programme since it began 20 years ago.

“The most enjoyable thing was interacting with so many people at the same time from so many different cultures,” says Jacob. “The cultural diversity in one room was spectacular.” 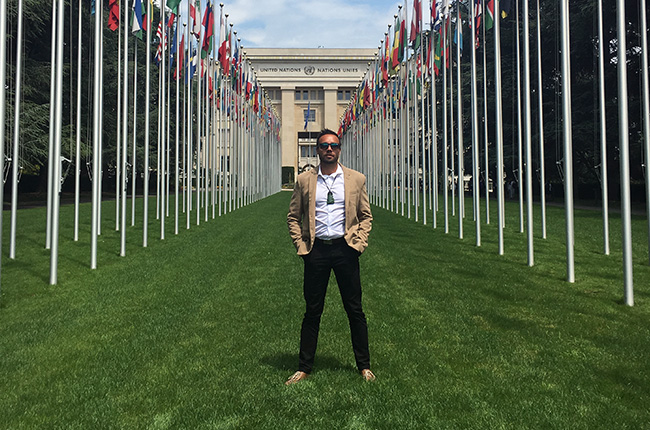 Jacob Ashdown at the UN Indigenous Fellowship Programme in Geneva.

He first knew about the programme when his MSc academic supervisor Dr Gareth Treharne, from the Department of Psychology, shared a link calling for applications for the programme.

The requirements were that applicants had to be indigenous and working for a non-government organisation that works with indigenous peoples.

Jacob was employed for five years at Moana House in Dunedin, which is a residential therapeutic community that works with men with histories of addiction and offending. The majority of the tangata whairoa (people seeking wellness) at Moana House are Māori or Pacific Islander.

The UN programme was established to enhance indigenous peoples’ knowledge and application of the various UN human rights mechanisms, such as forums, reviews and procedures, so they can better engage in UN processes to improve the situation for their local communities.

This year’s fellowship began by observing the 38th session of the UN Human Rights Council, after which Jacob chatted to the New Zealand Deputy Permanent Representative (Human Rights) Jarrod Clyne, and the Australian deputy ambassador, about their work and human rights issues that relate to NZ and Australia.

During the programme they had visits from many different UN agencies and NGOs, including Amnesty International, World Organisation Against Torture, Child Rights Connect and a representative from Front Line Defenders who discussed the risks involved with indigenous human rights defending.

The fellows made up four linguistic groups from English, Spanish, Russian and French-speaking communities, and they shared their traditions, experiences, food, dances and song.

“We were not afforded the luxury of professional interpretation 24/7 so we had to improvise and learn how to communicate despite the language barriers,” says Jacob.

Countries and peoples represented at the programme stretched from Myanmar to Uganda, the Sudan to Canada, and Costa Rica to Russia.

In the fifth week, the English-speaking fellows took part in a programme aimed to enhance peacekeeping and conflict resolution capacities of indigenous peoples.

“I now know how to engage with the UN in terms of human rights mechanisms and I can share that with people back home,” says Jacob. “The programme was really eye-opening about what’s happening in the world. We’re safe in New Zealand, but it wasn’t like that for a lot of the other people on the programme.”

Jacob’s next goal is to learn Spanish, and he is currently in Paraguay staying with a friend he met on the fellowship.

“If I want to work internationally I need to speak Spanish or French.”

He’s also applying to do his PhD at the University of Duesto in Bilbao, Spain, and long-term he plans to work in indigenous rights either in New Zealand or internationally. “We’ll see where learning Spanish takes me.”